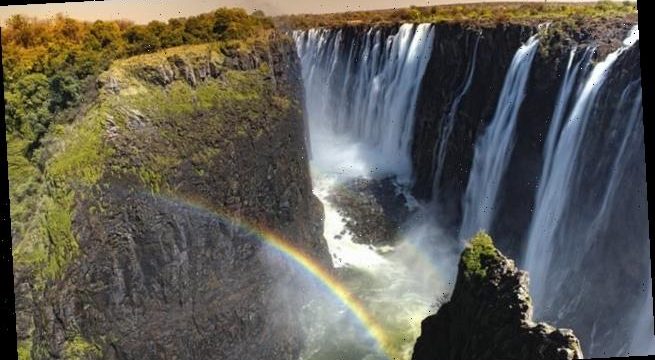 The Victoria Falls are thundering once again, just months after a severe drought brought the world’s largest waterfall to a virtual trickle.

Heavy rainfall upstream means the Zambezi River, which feeds the falls, is now at its highest level for 20 years and has seen the amount of water cascading over the rocky outcrop increase by ten times since January.

A second deluge of water which fell in Angola in recent weeks near the source of the river, some 480 miles away, is on course to top up the torrent to levels not seen since the Seventies. 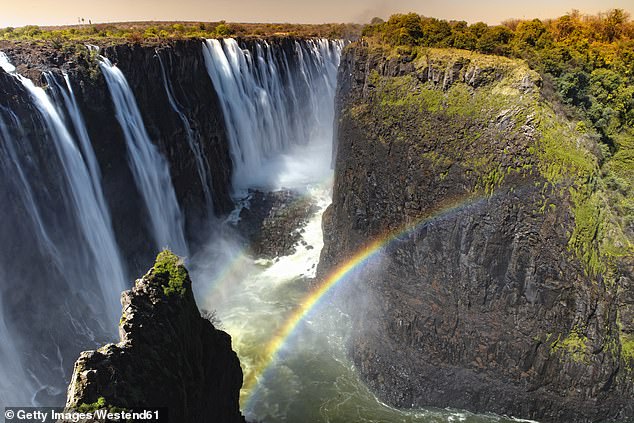 Victoria Falls, which sits on the border of Zambia and Zimbabwe in southern Africa, has come roaring back to life thanks to heavy rains upstream (file image) 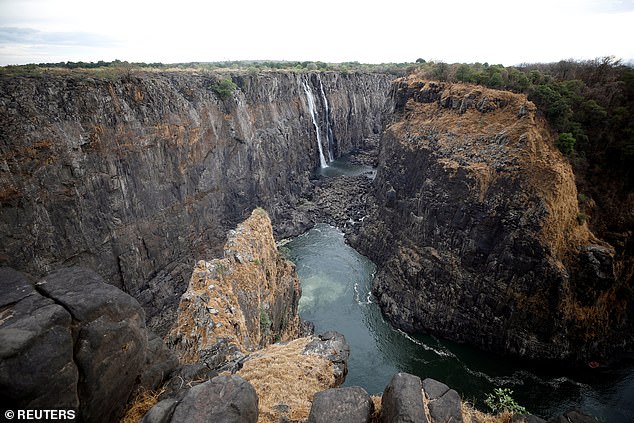 Just four months ago the falls, thought to be the largest in the world, had been reduced to a mere trickle amid the worst drought in the region for 100 years

Video taken by writer and photographer Peter Frost shows water gushing over the falls on Wednesday.

Trevor Lane, 68, a conservationist based in the town of Livingstone close to the falls, told The Times: ‘It looks very much like we are going to exceed the record set in the Seventies in the next fortnight.’

However, almost nobody will get to witness the sight firsthand after Zimbabwe, on whose border the falls sits, closed viewing sights amid a lockdown over coronavirus.

The Victoria Falls – named by Scottish Explorer Robert Livingstone in 1855, but known as Mosi-oa-Tunya or ‘The Smoke That Thunders’ to locals for much longer – are neither the world’s tallest, nor widest falls.

However, they are known as the world’s largest due to a combination of width, height, and volume of water cascading over them.

For comparison, they are almost twice the height of America’s Niagara Falls and more than twice the width of the Horseshoe Falls.

The falls sit on the border between Zimbabwe and Zambia, and were formed by the Zambezi river washing away soft sedimentary rock to expose hard basalt beneath. 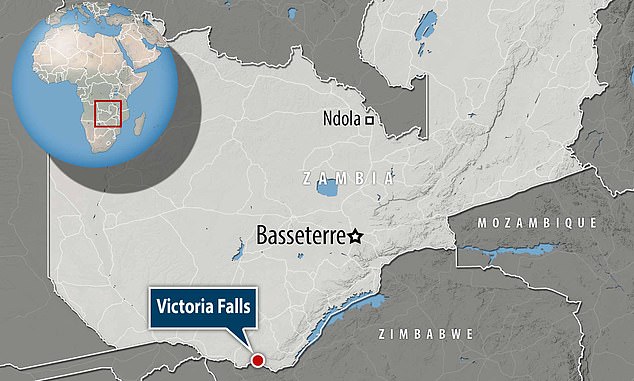 The falls are set to reach levels not seen since the 1970s after a second deluge in recent weeks, but few will get to see it after Zambia and Zimbabwe closed viewing areas due to coronavirus 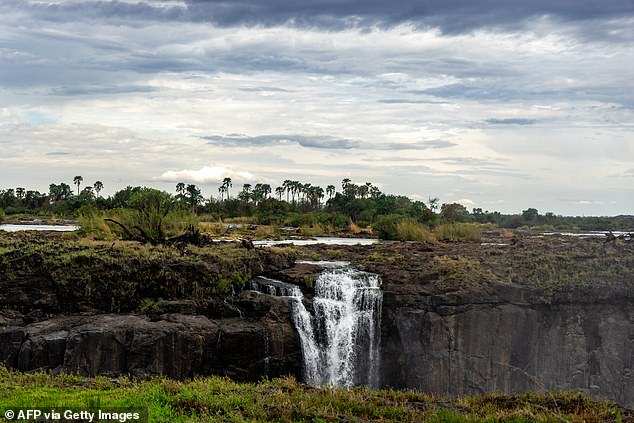 News of heavy rainfall will also come as a relief to the citizens of Zambia, Zimbabwe and South Africa who rely on the Zambezi for power which is generated at the Kariba dam downstream of the falls (pictured, the falls at a trickle in November last year)

The river itself originates close to the border where Zambia, Angola and the Democratic Republic of the Congo meet.

It then flows through Zambia, Angola and Namibia, then back along the border of Zambia before discharging into the Indian Ocean in Mozambique.

The river is dammed at two points, the first of which – the Kariba – is located a short distance downstream from the falls.

While river levels have hit historic highs, the reservoir that feeds the dam is only 16 per cent full after the region suffered through its worst drought in 100 years.

The dam provides power for large parts of Zambia, Zimbabwe and South Africa, which have suffered blackouts as the river dried up.

Seeing the falls disappear also meant a drop in tourist revenues for Zambia and Zimbabwe, which typically attract millions of visitors each year.

The San Rafael waterfall in Ecuador has run dry.

Local officials have traced the cause to a large sinkhole that opened beneath the river that once fed the falls.

Located in Cayambe Coca Park, part of the Ecuadorian Amazon near the border with Colombia, the falls ranked as the tallest in the country at more than 500 feet.

The government has restricted access to the site of the falls and surrounding area as a team investigates what caused the sinkhole, according to a report in Mongabay.

Some have pointed to a hydroelectric plant 12 miles upstream as a possible cause.

‘A waterfall that has been there for thousands of years does not collapse, coincidentally, a few years after opening a hydroelectric project,’ Emilio Cobo, coordinator at the South America Water Program with the International Union for the Conservation of Nature, told Mongabay.

‘These are processes that are in scientific papers and there is sufficient evidence that a dam can cause effects of this type on a river.’

The plant, which was built by the Chinese company SinoHydro and opened in 2016, isn’t directly on the river, but it has a diversion reservoir that’s designed to remove between 90 and 100 percent of the sediment from the river before its waters reach the plant. 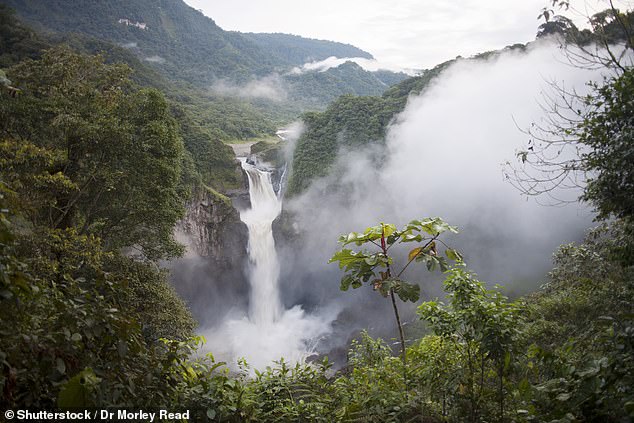 The San Rafael waterfall (pictured above) was the tallest waterfall in Ecuador, at over 500 feet, before a sinkhole formed underneath the river that feeds it, causing the falls to run dry

Sediment acts as a protective layer in riverbeds, helping to insulate the ground below from water erosion.

Without a steady flow of new sediment from upstream, the older sediment is eventually washed away, leaving more of the riverbed susceptible to erosion, a condition researchers describe as ‘hungry waters.’

Geologist and former secretary of Natural Capital at Ecuador’s Ministry of Environment Alfredo Carrasco argues that the ‘hungry waters’ phenomenon could also have been caused by seismic activity in the region.

‘There are many quite intense earthquakes here. In March 1987, a very strong one appeared that caused tremendous damage to the trans-Ecuadorian oil pipeline that passes right through it,’ Carrasco said.

‘For me, the phenomenon is eminently of natural origin.’