Victoria's health authorities were not running enough tests in May, letting a small and known outbreak turn into a second wave that forced the state back into lockdown, the new head of the state’s testing strategy has admitted.

Health authorities were alerted to a staff member at a quarantine hotel falling sick on May 26. Yet over the next seven days, the state’s daily testing average actually declined, official figures show – falling from 8047 on the 26th to just 6295 on June 2.

By way of comparison, in the first two weeks of October the state was doing about 12,800 tests a day, despite case numbers in single digits. In mid-July about 27,000 tests were being done daily. 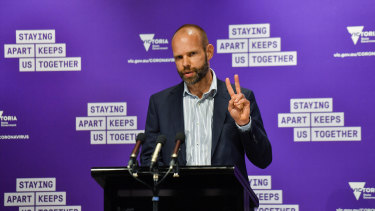 While much of the blame for Victoria’s second wave has been slated to the hotel quarantine scandal, the state also was not testing enough to contain the virus, said Victoria’s new testing commander Jeroen Weimar.

“Our level of testing at the time of seeding was far, far lower. That’s one of the lessons we have had to learn,” he told The Sunday Age.

Two security guards fell sick in NSW’s hotel quarantine in August, but did not trigger a second wave. The state averaged 22,882 tests a day in that month, several times the amount Victoria was doing when its second wave was seeded.

“Testing is our eyes. We didn’t see the extent of spread till it was too late. So we were flying blind,” she said.

In addition to symptomatic testing, sentinel testing sites will be set up at high-risk workplaces including aged care and meatworks, with every worker tested.

The expectation is, if the virus is circulating in the community, it will likely show up at these high-risk locations.

Major investments in testing labs will allow up to 35,000 tests to be turned around every day by early next year.

Millions more is being spent on an evaluation of rapid point-of-care antigen tests, which are cheap and claim to be able to provide results within 15 minutes. It remains unclear if they are accurate enough to be useful.

The investment was already paying dividends, Mr Weimar said. After an outbreak emerged in Casey in September, “we just flooded the place [with testing]”.

Almost 15,000 tests were done in Dandenong and Casey over two weeks, a 50 per cent increase. 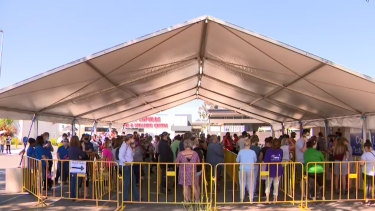 “That outbreak has really stabilised. You had 44 cases, if that breaks into the broader community that’s potentially a huge outbreak," Mr Weimar said.

But reports from Shepparton of overwhelmed testing clinics, with some people turned away, suggest the state is not out of the woods yet.

Epidemiologist Mary-Louise McLaws, a UNSW professor and World Health Organisation advisor, said Victoria should consider deploying mass testing for those without symptoms or who aren’t close contacts of a positive case.

This would help track down asymptomatic cases which may inadvertently be spreading the virus in the community, she said.

“I would be opening up a test clinic in [hotspot] areas in the shopping malls and ask everyone to get tested, even without symptoms,” she said.

Currently, people who get tested must self-isolate until they get their result. However Professor McLaws said this requirement could be relaxed for people who don’t have symptoms as a way of encouraging participation.

“You may as well say everyone without symptoms get tested but continue to wear masks and go to work,” she said.

“They won't turn up if you say ‘by the way you have to stay home for a couple of days to get your test result’.”

Earlier this week, Chief Health Officer Brett Sutton downplayed the need to expand testing to asymptomatic people in response to outbreaks in places like the Chadstone shopping centre.

“An approach of testing every single asymptomatic person in a particular setting, when there are tens of thousands coming on a daily basis, is not value for money and is not necessarily a proportionate approach,” he said.

Our weekly newsletter will deliver expert analysis of the race to the White House from our US correspondent Matthew Knott. Sign up for The Sydney Morning Herald‘s newsletter here, The Age‘s here, Brisbane Times‘ here and WAtoday‘s here.