One of Victoria’s most-experienced primary school principals says many prep students would be better off repeating their foundation year next year to avoid falling behind permanently from months of lost classroom learning.

Kevin Mackay, who has been principal at Dandenong North Primary School for about 35 years, estimated that the COVID-19 pandemic had cost his students about half a year of essential development in literacy, numeracy and oral language. 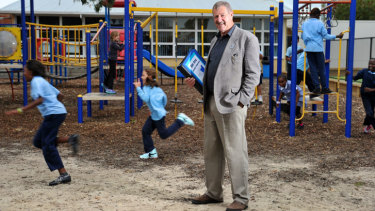 Ninety per cent of the school’s students are from non-English speaking backgrounds.

“It’ll vary for year levels and it’ll vary for cultural groups and in different postcodes, but in our case it would have to be six months and could even be eight months [lost development],” he said.

Many of the school’s students would have had no conversations in English during several weeks of being at home learning remotely, Mr Mackay said.

“The government will not want to see a lot of repeats … but I still think there is a place for some of the preps to repeat, particularly in our case where they don’t have English, they haven’t been to kindergarten and the learning they have had has been disrupted.”

Prep students in Melbourne’s lockdown zones have missed at least 12 weeks of classroom learning in terms two and three.

Education Minister James Merlino told a parliamentary hearing into the state government’s response to COVID-19 last week he is considering a program of small group tutoring sessions in term four and next year to help students catch up.

Schools would be directed to use their equity funding to employ tutors in the roles.

Julie Sonnemann, School Education Fellow at the Grattan Institute, said it was “very likely disadvantaged students will have learnt nothing or even fallen further behind where they were in term one”, even at schools where remote learning has been delivered reasonably well.

This is for a range of potential reasons, including parents’ working hours, education levels, English language ability and students’ access to digital devices.

Ms Sonnemann supported the tutoring push but said school equity budgets would be inadequate for the task.

“We’re talking about missing half the school year now; this is different to just a regular situation for a disadvantaged school or student,” she said.

Mr Mackay said he expected the school would need increased staff to meet higher demand for interventions when students return.

“If you’ve learned something and you haven’t practised it close to the time you’ve first learned it, then you forget it quickly and that’s going to happen with the preps with their phonics knowledge,” Mr Mackay said. “We will pretty much have to go back to square one.”

A spokesperson for the Department of Education and Training said it did not expect an increase in the number of prep students repeating in 2021.

"Our teachers and schools are doing an outstanding job identifying students who may need additional support and put in place targeted learning strategies for those who need it," the spokesperson said.

Julie Fisher is principal at Spring Parks Primary School in nearby Springvale, which also has a high proportion of children from non-English speaking backgrounds.

The school had dozens of students on-site during Melbourne’s first period of remote learning in term two.

“In the first lockdown we were encouraged to have children on-site that were vulnerable, and we were allowed to decide what vulnerable meant,” Ms Fisher said. “For us it meant kids that did have parents that were non-English speaking or had very limited English.”

The students were taught remotely while on-site, but also had extra support when they needed it, Ms Fisher said.

Spring Parks would initially focus on settling its preps back into school routines rather than assess their development, she said.