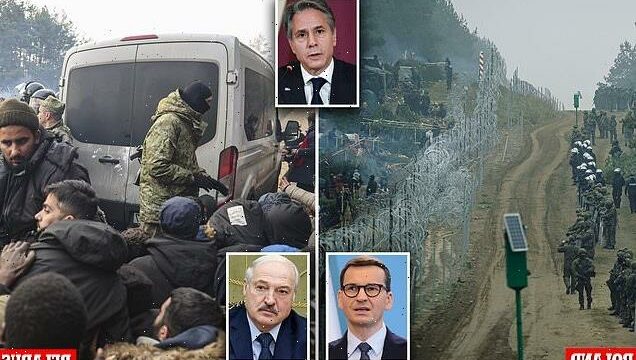 Top U.S. and Polish diplomats condemned the treatment of migrants by the Belarusian government in a telephone call on Saturday, the State Department said, and expressed support for Ukraine against Russian military aggression.

‘The actions by the Lukashenko regime threaten security, sow division, and aim to distract from Russia’s activities on the border with Ukraine.’

The news comes after Poland, Lithuania and Latvia are considering asking NATO to hold emergency talks as they struggle to manage a tense migration standoff on their borders with Belarus, the Polish prime minister said Sunday.

Polish Prime Minister Mateusz Morawiecki said he and his two Baltic counterparts are discussing whether to ask for such talks under the NATO treaty, which allows any ally to request consultations if it feels its territorial integrity, political independence or security is threatened.

Still, it’s a step that has only been requested a few times in the history of the Western alliance. 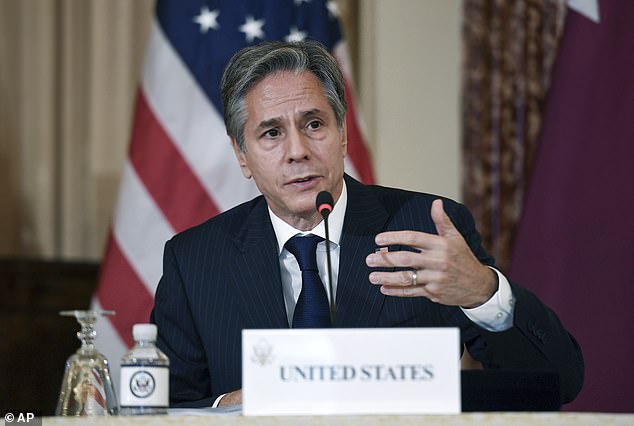 Secretary of State Antony Blinken has reaffirmed the US’ commitment to solving tensions over an influx of migrants at the Poland-Belarus border, and warns the EU to be ready for a Russian military aggression over its border with Ukraine 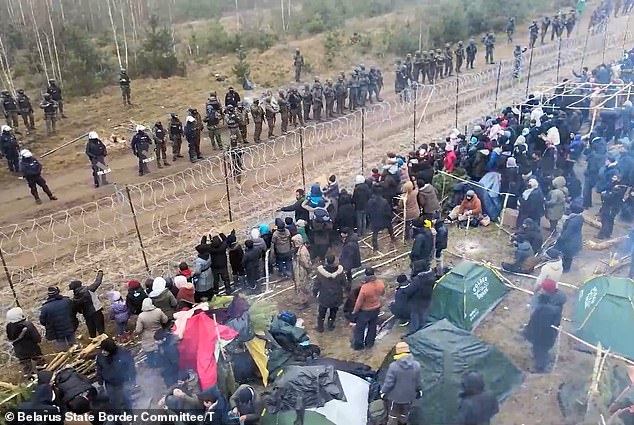 The migrant crisis on the border of Belarus with Poland, Lithuania, and Latvia escalated on November 8. Several thousand migrants have approached the Belarusian-Polish border and set up a tent camp there; some of them tried to cross the border by breaking a barbed wire fence 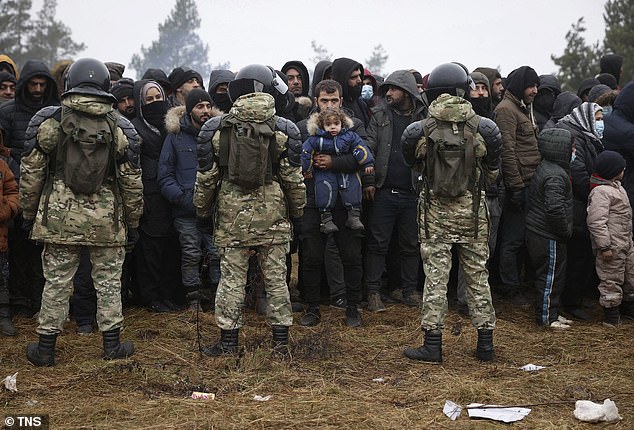 Thousands of migrants have been detained after crossing into Poland from Belarus, Warsaw said on November 14, warning of a possible larger breakthrough ahead of an EU meeting to widen sanctions on Belarus 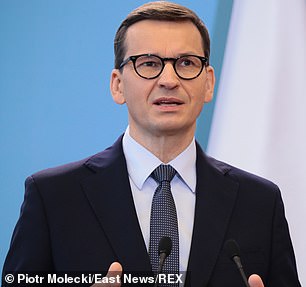 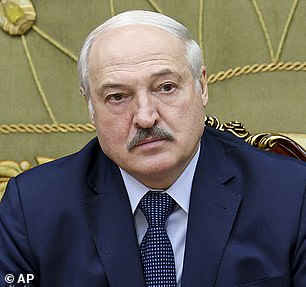 The authoritarian Belarusian regime in Minsk has for months been orchestrating a flow of migrants across its border into the three European Union nations, which form the eastern flank of both the 27-nation EU and NATO.

In response, the three have been reinforcing their borders.

In an interview with state news agency PAP, Morawiecki vowed that Poland’s border with Belarus ‘will be an effective and final barrier’ to actions by Belarusian President Alexander Lukashenko.

‘There is no doubt that things have gone too far,’ Morawiecki said.

Many migrants are now stuck in makeshift camps in freezing weather as Poland has reinforced its border with 15,000 soldiers in addition to border guards and police. Most are fleeing conflict, poverty or hopelessness in Syria and Iraq and hope to reach Germany or elsewhere in western Europe.

The situation grew more dramatic last week as a large group of migrants appeared across the border from the Polish town of Kuźnica. More arrived there on Sunday, and Poland’s Interior Ministry released a video showing police warning the people: ‘If you don’t follow the orders, force may be used against you.’ 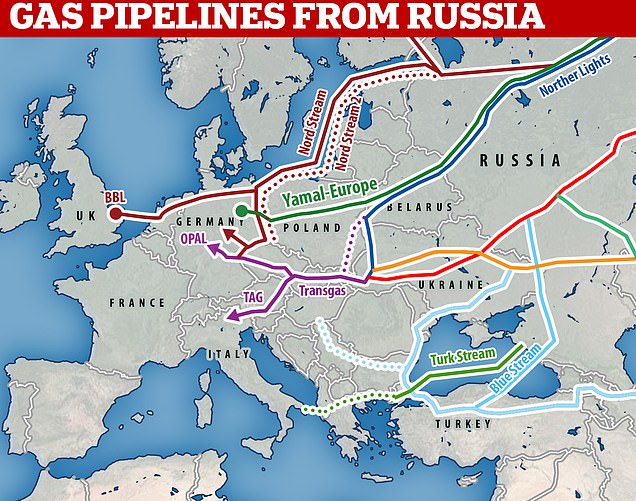 The Yamal-Europe is one of three major Russian pipelines into Europe and represents around 20 per cent of Russia’s supplying capacity. Russia supplies around 50 per cent of the EU’s natural gas imports. Unlike much of Europe, the UK is not reliant on Russia for its gas supply. Although Britain imports most of its gas, less than 5 per cent comes from Russia (which Gazprom delivers through the BBL Pipeline from the Netherlands, as shown on map). Most of the gas Britain imports comes from Norway. 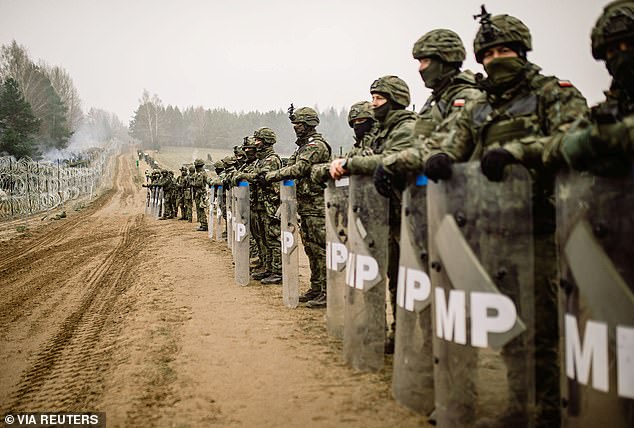 Polish military police stay on guard at the Poland/Belarus border near Kuznica, Poland. The situation on the border between Poland and Belarus continues to intensify, as thousands of migrants arrive at the Polish border to join the EU. 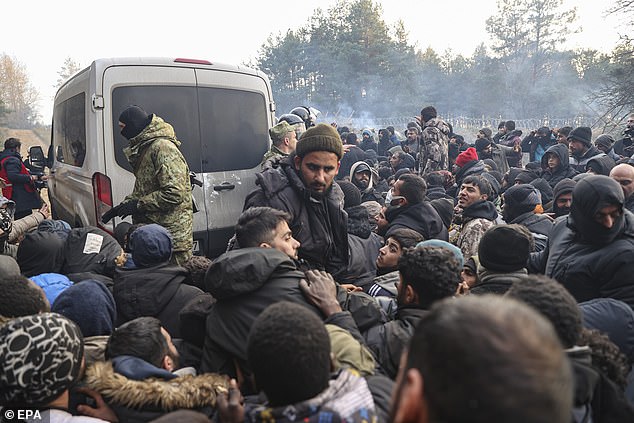 Asylum-seekers, refugees and migrants, gather to receive humanitarian aid distributed by Belarusian military at a camp at the Belarus-Polish border in the Grodno region, not far from the checkpoint Bruzgi, Belarus 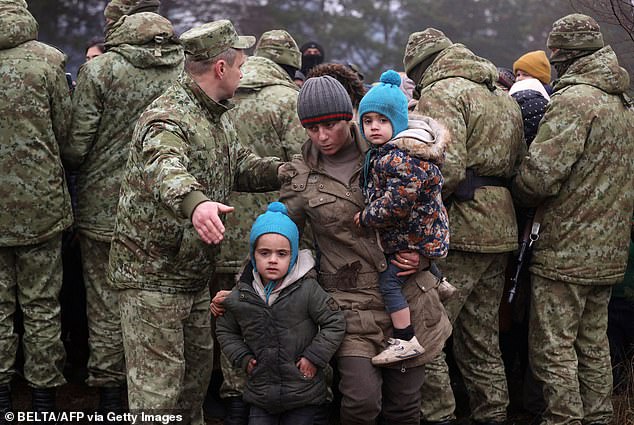 Group of approximately 2,000 asylum-seekers, refugees and migrants who want to obtain asylum in the European Union have been trapped at low temperatures for four days at the border

In Baghdad, the Iraqi government urged its citizens stranded at the edge of the EU to return home voluntarily on Iraqi Airways flights that the government is providing.

Ahmed al-Sahhaf, the spokesman for Iraq’s Foreign Ministry, told The Associated Press on Sunday that ‘large groups of Iraqi migrants are being exposed to difficult humanitarian situations.’ He said the ministry has also suspended the work permit of Belarus’ honorary consul in Baghdad to stop the issuing of entry visas to Belarus.

‘Smuggling and human trafficking networks are working in inhuman ways and imposing risks on large numbers of Iraqi travelers,’ he said.

The EU accuses Lukashenko of encouraging the migrants from the Mideast to breach the borders in retaliation for sanctions on his repressive rule. Belarus denies the allegations.

‘The current situation is unacceptable and must stop. People should not be used as weapons,’ Borrell wrote on Twitter.

The Belarusian Foreign Ministry said Makei informed Borrell of the steps Belarus was taking ‘to reduce the flow of migrants from Asia, Africa and the Middle East’ and to provide them with humanitarian assistance.

‘The interest in the early resolution of the migration crisis was confirmed,’ the ministry said, while also stressing the ‘futility’ of sanctions on the Belarus-EU relationship. 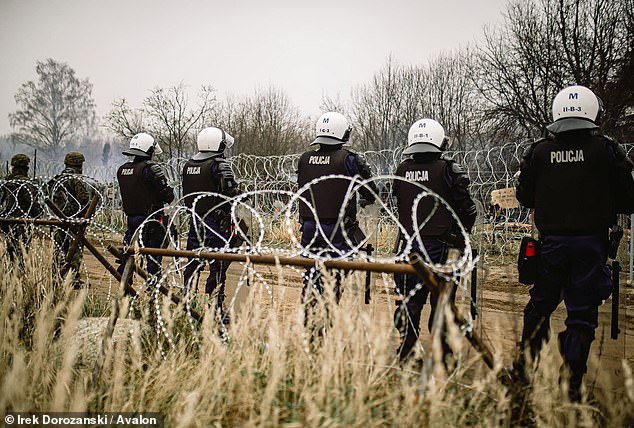 Polish police (pictured) has been struggling to stem the flow of Middle Eastern and African migrants crossing into Poland from Belarus. The Polish government says the migrants have been invited to Belarus by Alexander Lukashenko, the country’s president, allegedly under the promise they will be able to live in the EU. 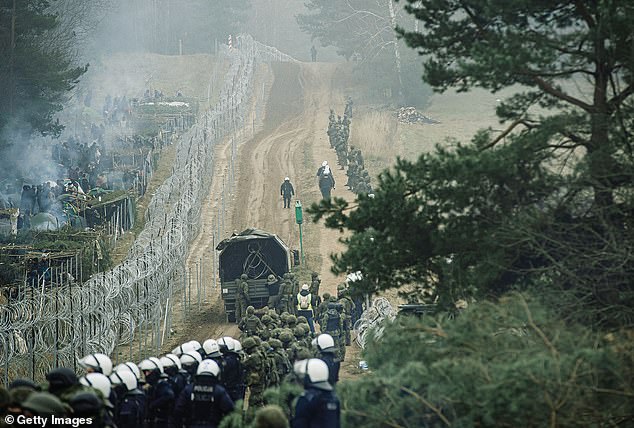 Tensions at the border escalated further this week after Russian paratroopers deployed on the Belarusian side of the border, triggering Poland to move a 15,000 strong battalion (pictured) to reinforce the integrity of their checkpoints 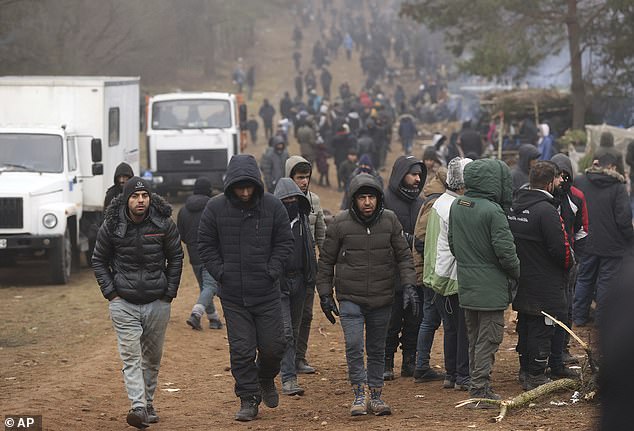 Migrants from the Middle East and elsewhere walk along the barbed wire fence gathering at the Belarus-Poland border near Grodno, Belarus on Sunday. Poland’s as well as the EU have been saying Belarus is orchestrating a migrant crisis on their borders in retaliation for EU sanctions on Belarus for cracking down on democracy protesters 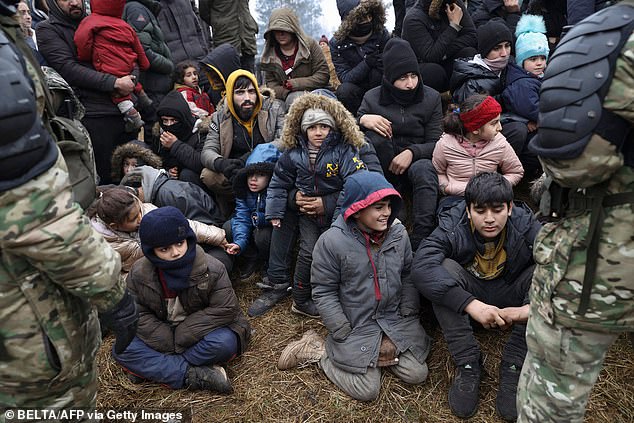 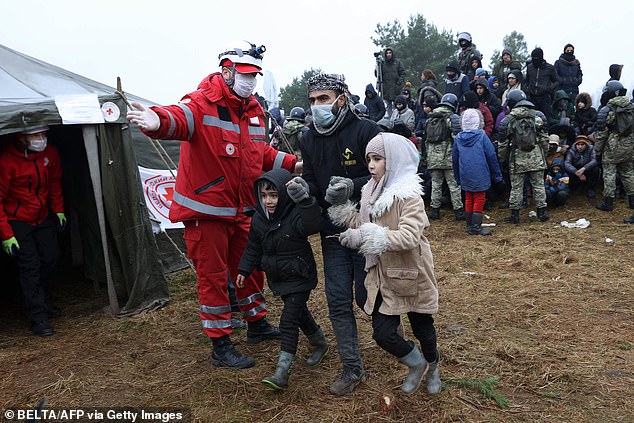 Polish authorities reported Sunday that migrants who tried to cross in from Belarus the evening before attacked Polish police officers with stones, hitting one in the helmet. On Saturday, Poland said Belarusian forces were using a vehicle to try to dismantle a border fence and were using lasers to blind Polish forces.

The reported incidents are all but impossible to verify. Independent journalists face limits in Belarus and a state of emergency in Poland’s border zone prevents media from entering the area.

Poland’s Border Guard agency said it has recorded over 33,000 illegal attempts to cross the border from Belarus so far this year, up from 120 last year. Polish forces generally push people back across the border. Yet German authorities say they have recorded more than 9,000 migrants who have come through Belarus.

Poland’s Interior Ministry is seeking to dispel rumors among migrants that Poland has agreed to let them go by bus to Germany. The government is sending alerts in English to phones in the border area saying: ‘It’s a total lie and nonsense! Poland will continue to protect its border with Belarus.’

British special forces are put on alert to be deployed to Ukraine as size of Red Army on border swells to 100,000 troops and Russian Navy tracks US warships in the Black Sea

A task force of up to 600 UK troops is on standby to deploy in Ukraine amid fears that Russian troops massing near the border are planning an invasion.

Units from the SAS and Parachute Regiment are preparing for an urgent deployment after defence chiefs and the head of MI6 advised Downing Street that Russian troop movement represents a clear and present danger to Ukraine and the West.

‘The high readiness element of the brigade was told it may need to deploy at very short notice,’ a source told the Mirror.

‘Between 400 and 600 troops are ready. Their equipment is packed and they are ready to fly to Ukraine and either land or parachute in. They have trained for both eventualities.’

It comes amid rising tensions in Europe as Foreign Secretary Liz Truss urged Russia’s President Vladimir Putin to intervene in the ‘shameful manufactured migrant crisis’ unfolding at the border between Belarus and Poland.

Liz Truss today declared that Russia has a ‘clear responsibility’ to end the escalating migrant stand-off, adding the UK ‘will not look away’ as a large number of migrants gather on the Belarusian side of the border, with Polish authorities reporting daily new attempts by the migrants to breach the divide.