Washington: The United States is unlikely to ease sanctions on Iran despite an appeal from China that it do so because of the coronavirus pandemic, sources familiar with the matter said, arguing that Tehran continues what Washington regards as its malign behaviour. 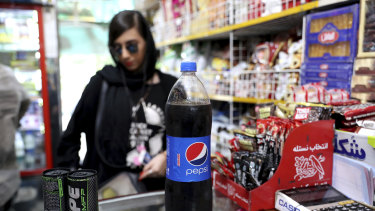 An Iranian customer buys a Pepsi in a grocery store in downtown Tehran. Credit:AP

The sources, who included a US official, diplomats and analysts, noted Washington has made offers to help Tehran with the outbreak but these have been spurned by Tehran.

They also cited Wednesday's rocket attack on Iraq’s Taji military camp north of Baghdad that killed one British and two American personnel and that the Pentagon blamed on the Iran-backed Kataib Hezbollah Shi'ite militia.

"The regime can't be trusted to channel whatever money it would gain from the easing of pressure toward humanitarian activity. The likelihood is the elites will steal it and/or funnel it toward malign activity," said a US official on condition of anonymity.

Two diplomats who spoke on condition of anonymity said they thought it highly unlikely that the Trump administration would provide broad-based sanctions relief, with one saying the most it might do would to offer greater humanitarian relief.

"I don't believe the administration is in any way likely to significantly alter its approach towards Iran, including and especially the 'maximum pressure' economic strategy," added Suzanne Maloney of the Brookings Institution think tank.

Maloney said Washington faces the "broader dilemma" that Iran-backed Shi'ite militias have stepped up attacks on US forces and would not want to look like it was buckling to pressure or to invite further such attacks.

The coronavirus has killed 853 people and infected 14,991 in Iran, making it the worst-hit country in the Middle East and prompting China to urge the United States to ease sanctions.

"Continued sanction on Iran was against humanitarianism and hampers Iran's epidemic response & delivery of humanitarian aid by the UN and other organisations," China's ministry of foreign affairs said on Twitter on Wednesday.

The US State Department did not immediately respond to a request for comment.

The United States reimposed sanctions on Iran's oil exports in 2018 after withdrawing from the 2015 nuclear deal that Tehran struck with six major powers to curb its nuclear program in return for relief from its economic isolation.

President Donald Trump restored sanctions to try to pressure Tehran to further constrain its nuclear program, limit its missile program and curb its use of proxy forces in Iraq, Yemen and Lebanon.