Beirut: The judge investigating the 2020 Beirut port explosion has unexpectedly resumed his inquiry and charged top security officials, three judicial officials said, more than a year after his probe was frozen by political resistance.

Judge Tarek Bitar’s efforts to interrogate top officials over the explosion that killed 220 people, including an Australian toddler, and shattered Beirut have been derailed by push-back from factions including the heavily armed, Iran-backed Hezbollah. 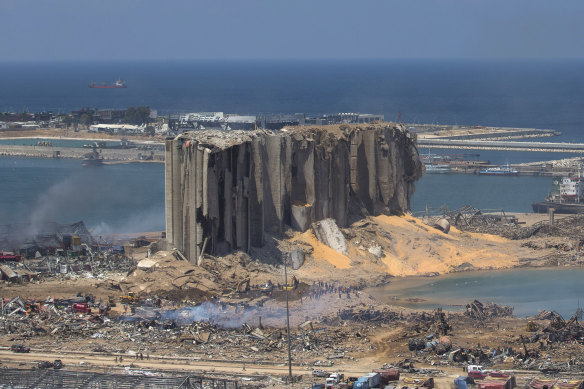 Destroyed buildings are visible a day after a massive explosion at the port of Beirut, Lebanon, in August 2020.Credit:Getty

Bitar has charged Major General Abbas Ibrahim, head of Lebanon’s domestic intelligence agency, and Major General Tony Saliba, head of another security body, in connection with the blast, the officials said on Tuesday (AEDT), without specifying the charges.

Ibrahim declined to comment on reports he had been charged. Saliba and Kahwaji could not immediately be reached for comment.

All have denied wrongdoing. 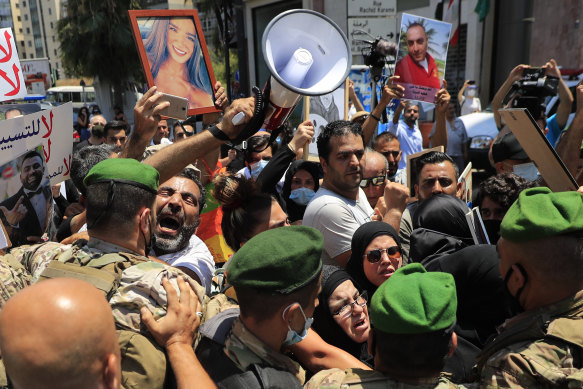 Families of the victims of the 2020 explosion at the port of Beirut are pushed back as they try to reach parliament in 2021.Credit:AP

The August 4, 2020 explosion was caused by hundreds of tonnes of ammonium nitrate unloaded at the port in 2013. No senior official has been held to account.

Victims’ relatives welcomed the resumption of the inquiry.

“It was a beautiful shock but we want to be sure that no one stands in his way,” said William Noun, who lost his brother in the explosion. 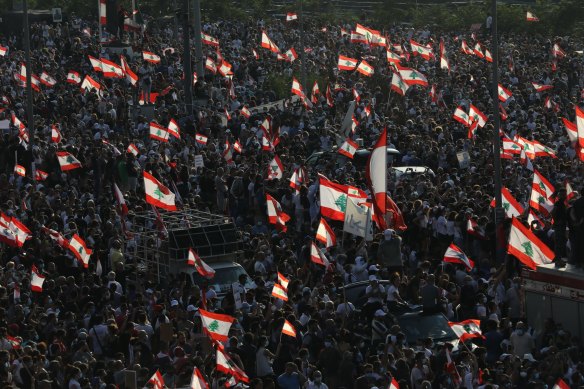 Lebanese protesters gathered in mourning near the port in Beirut a year after the explosion.Credit:Getty Images

Bitar met French judges visiting Beirut last week as part of a French investigation into the explosion that killed two French nationals. He was unable to share documents with them because the investigation was frozen.

Politicians that Bitar had sought to question, including Hezbollah allies, made dozens of legal challenges disputing his right to interrogate them and saying he had overstepped his powers.

The investigation was paralysed in early 2022 by the retirement of judges from a court that must rule on several such complaints against Bitar before he can continue.

The court has been awaiting the appointment of new judges to resume its work – a step authorities have not taken.

Bitar resumed his work on the basis of a legal interpretation challenging the reasons for its suspension, the judicial sources said.

Hezbollah has campaigned against Bitar as he sought to question its allies and accused Washington of meddling in the probe. Hezbollah leader Sayyed Hassan Nasrallah called for him to be replaced.

Top Hezbollah official Hussein Khalil said he did not want to comment on the latest development but reiterated Hezbollah’s stance that the investigation had been marred by “black points”.

An anti-Bitar protest called by Hezbollah and its allies in October 2021 escalated into deadly violence.

The investigation’s resumption “will certainly raise tensions in the country because the factions who were opposed to his moves will raise hell – they will object again”, said Nabil Boumonsef, deputy editor-in-chief of Annahar newspaper.

All of them, including former ministers Ali Hassan Khalil and Ghazi Zeaiter, have denied wrongdoing, and some say they have immunity from prosecution.

The Lebanese judiciary, where appointments depend largely on political backing, has long been prone to political influence.

A court removed the first judge appointed to investigate the explosion, Fadi Sawan, after he charged three ex-ministers and Diab with negligence.

In November, Lebanon’s most senior judge said political meddling in judicial work had led to a chaotic situation that required a “revolution in approaches” to resolve.