Kyiv: Ukraine accused Moscow on Thursday of forcibly taking hundreds of thousands of civilians from shattered Ukrainian cities to Russia, where some may be used as “hostages” to pressure Kyiv to give up.

Lyudmyla Denisova, Ukraine’s ombudsperson, said 402,000 people, including 84,000 children, have been taken against their will to Russia, and some have reported shortages of food and water there. 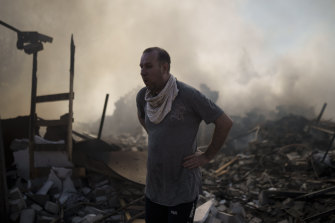 A neighbour pauses as he tries to extinguish the fire of a house, destroyed after a Russian attack in Kharkiv.Credit:AP Photo/Felipe Dana

The Kremlin has said that the people relocated from Ukraine wanted to go to Russia. The country’s rebel-controlled eastern regions, for example, are predominantly Russian-speaking, and many people there have supported close ties to Moscow.

A month into the invasion, meanwhile, the two sides traded heavy blows in what has become a devastating war of attrition. Ukraine’s navy said it sank a large landing ship near the port city of Berdyansk that had been used to supply Russian forces with armored vehicles. Russia claimed to have taken the eastern town of Izyum after fierce fighting.

At an emergency NATO summit in Brussels, Ukrainian President Volodymyr Zelensky pleaded with the Western allies via video for planes, tanks, rockets, air defence systems and other weapons, saying his country is “defending our common values.” US President Joe Biden, in Europe for a series of summits, gave assurances more aid is on its way.

Separately, the White House announced the US would welcome 100,000 Ukrainian refugees and provide an additional $1 billion in food, medicine, water and other supplies.

The UN General Assembly overwhelmingly approved a resolution on Friday (AEDT) blaming Russia for humanitarian crisis in Ukraine and urging an immediate cease-fire and protection for millions of civilians and the homes, schools and hospitals critical to their survival.

There was loud applause in the assembly chamber as the result of the vote was announced: 140-5 with only Belarus, Syria, North Korea and Eritrea joining Russia in opposing the measure. There were 38 abstentions, including Russian ally China.

Around the capital, Kyiv, and other areas, Ukrainian defenders appear to have fought Moscow’s ground troops to a stalemate, raising fears that a frustrated Russian President Vladimir Putin will resort to chemical, biological or nuclear weapons. 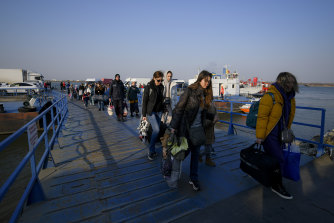 Kyiv and Moscow gave conflicting accounts, meanwhile, about the people being relocated to Russia and whether they were being moved willingly.

Russian Colonel-General Mikhail Mizintsev said a total of 384,000 people, including over 80,000 children, of the separatist-controlled Donetsk and Luhansk regions in eastern Ukraine have been evacuated to Russia since the start of the Russian military action.

Russian authorities said they are providing accommodations and dispensing payments to the evacuees.

But Donetsk Region Govenor Pavlo Kyrylenko said “people are being forcibly moved into the territory of the aggressor state.” Denisova said those removed by Russian troops included a 92-year-old woman in Mariupol who was forced to go to Taganrog in southern Russia.

Ukrainian officials said that the Russians are taking Ukrainians’ passports and moving them to “filtration camps” in Ukraine’s separatist-controlled east before sending them to various distant, economically depressed areas in Russia.

As for the naval attack in Berdyansk, Ukraine claimed two more ships were damaged and a 3000-tonne fuel tank was destroyed when the Orsk was sunk, causing a fire that spread to nearby ammunition supplies.

Sending a signal that Western sanctions have not brought it to its knees, Russia reopened its stock market but allowed only limited trading to prevent mass sell-offs. Foreigners were barred from selling, and traders were prohibited from short selling, or betting prices would fall.

The UN says that more than 3.6 million people have fled Ukraine since the war started exactly one month ago, in the biggest movement of people in Europe since World War II. Most believed they would soon be back home. That hope is waning now.

At the central station in the western city of Lviv, a teenage girl stood in the doorway of a waiting train, a white pet rabbit shivering in her arms. She was on her way to join her mother and then go on to Poland or Germany. She had been travelling alone, leaving other family members behind in Dnipro.

“At the beginning I didn’t want to leave,” she said. “Now I’m scared for my life.”

Get a note direct from our foreign correspondents on what’s making headlines around the world. Sign up for the weekly What in the World newsletter here.