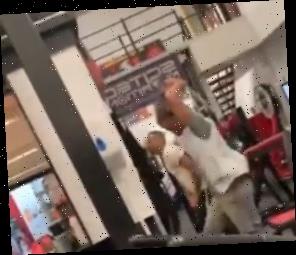 A huge brawl broke out at a U.K. gym last week, with users appearing to swing heavy exercise equipment at one another, video shows.

Video uploaded to social media shows a man striking another gymgoer’s leg with a metal pull-down bar before smashing it onto a countertop.

Other weightlifters are seen taking cover as a melee ensues.

Another clip shows a fitness fanatic appearing to swing a smaller bar at a man curled up on the ground.

“so man are fighting in the gym now … wow,” tweeted @ellenew3 along with the video.

Essex police told The Sun that a 17-year-old boy sustained bruising and cuts. A 27-year-old man got a cut above his eye in the Nov. 7 attack.

The “Ab Salute Gym” in Brentwood, about 30 miles east of London, issued a statement Wednesday in which it banned the individuals responsible for life.

“This was an isolated incident which has never happened in any of our five establishments in the 10 years we have been open,” it said. “We do not condone violence in any of our gyms and take this very seriously. The police are aware and appropriate action is being taken.”

Ab Salute Gym could not be reached for comment.