Washington: Former President Donald Trump has parted ways with his lead impeachment lawyers little more more than a week before his trial, two people familiar with the situation have said. The change injects fresh uncertainty into the makeup and strategy of his defence team.

Butch Bowers and Deborah Barbier, both South Carolina lawyers, have left the defence team in what one person described on Saturday (US time) as a “mutual decision” that reflected a difference of opinion on the direction of the case. 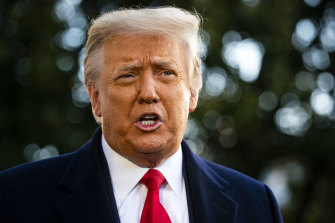 The two people familiar with the legal team discussions insisted on anonymity to discuss private conversations. One said new additions to the legal team were expected to be announced in a day or two.

Bowers and Barbier did not immediately return messages seeking comment.

Trump is set to stand trial on the week of February 8 on a charge that he incited the riot inside the US Capitol. Republicans and Trump aides have made clear that they intend to make a simple argument: The trial is unconstitutional because Trump is no longer in office.

CNN was first to report the departure of the lawyers.

Both attorneys have experience in public corruption cases, with both representing Republican state Representative Rick Quinn on charges of misconduct in office. Quinn ultimately resigned in a 2017 deal that resulted in the termination of conspiracy and illegal lobbying charges against his father, GOP consultant Richard Quinn — who had at times counted former President Ronald Reagan and senators John McCain and Lindsey Graham among his clients.

It’s in part on the advice of US senator Lindsey Graham that Trump is turning to the South Carolina team after other legal allies passed on the case. It’s a notable departure from his 2020 impeachment trial, when Trump had a stable of nationally known attorneys, including Alan Dershowitz, Jay Sekulow and Kenneth Starr.

Bowers has years of experience representing elected officials and political candidates, including former South Carolina Gov. Mark Sanford. Bowers represented Sanford when state lawmakers mulled impeaching the governor after revelations Sanford had disappeared from the state, leaving no chain of command for five days, to see his lover in Argentina in 2009. The impeachment effort never made it out of committee.

Bowers also successfully guided another former governor, Nikki Haley, through an investigation into whether she had violated state ethics law.

Barbier spent more than a decade as a federal prosecutor and now, in private practice, specialises in white-collar defence. She also represented Richard Quinn in his illegal lobbying case.

The House officially transmitted the article of impeachment – accusing Trump of inciting the mob that rampaged through the US Capitol on January 6 – to the Senate on Monday. The trial could have officially begun Tuesday, but Republicans pushed to delay it to give Trump a chance to organise his legal team and prepare a defence.

If convicted, Trump could be barred from holding public office again, ending any hopes of mounting another White House bid in 2024.