As the City of Melbourne’s protocol co-ordinator for 27 years, Jean-Francois Piery has had a box seat to many VIP visits to our fair city.

Mr Piery, described as “the host with the most” by lord mayor Sally Capp, said meeting interesting people had been a perk of the job, from which he is retiring on Friday.

Protocol whiz Jean-Francois Piery on the balcony of Melbourne Town Hall, his workplace of 27 years.Credit:Joe Armao

He’s greeted everyone from Muhammad Ali to Dame Edna Everage. The Dalai Lama was a peaceful and good-humoured presence, while Prince Frederik and Princess Mary of Denmark were “very lovely people”, Mr Piery said.

He was impressed by the “friendly” then Irish president Mary McAleese, who was equally comfortable talking to aged care residents and to VIPs.

The famous French mime artist, Marcel Marceau, at a 2006 reception at Melbourne Town Hall, didn’t stop talking for almost an hour. Marceau was “a nice man, and full of life”. 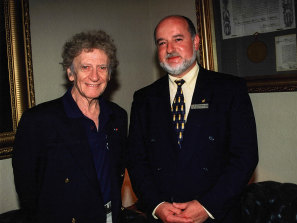 Mr Piery said the key to the success of such visits was to treat people with respect and dignity, “making sure that they are comfortable and have everything they need; that it’s their day, and not a perfunctory thing”.

There were unforeseen hitches. Mr Piery didn’t plan for a Town Hall lift carrying the Swedish ambassador to get stuck between floors. She had to be dragged out by her arms. “It was very embarrassing,” he said.

But Mr Piery has loved the job’s diversity: one minute you were dealing with blocked pipes, “the next, working on a menu for Princess Charlene of Monaco”.

Born in France, Mr Piery was a waiter in a Michelin three-star restaurant in Vonnas, eastern France, and a banqueting manager at Maxim’s de Paris in London before he and his English wife, Monica, migrated to Australia in 1991.

Mr Piery managed restaurants such as Jean Jacques by the Sea in St Kilda before an acquaintance recommended him for the City of Melbourne protocol job in 1994. It fitted him like a glove. 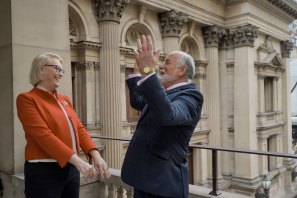 He has served under one commissioner (Kevan Gosper) and five lord mayors, including the incumbent Cr Capp, who described Mr Piery as “the host with the most, steering introductions, making speeches and hitting the dance floor, not necessarily in that order”.

“Jean-Francois is the master at guiding people through complicated protocols and procedures with aplomb, is well researched — so he always has the right thing to say at awkward moments — and is full of life, which brings energy to most situations,” Cr Capp said.

Mr Piery has learned a lot about cultural etiquette, such as not to show the soles of your shoes to Indonesians — it’s considered an insult.

One of Mr Piery’s most important jobs was to organise the regular Australian citizenship ceremonies and to look after the mayoral regalia, including the original, 18-carat gold mayoral chains, worth $1.2 million, some of whose emblems date back to the 1830s.

Mr Piery has learned a lot about the Town Hall. It is said to be haunted by the ghost of a hall keeper who died there in the 1960s. Some of its paintings, including a portrait by Tom Roberts, are worth more than $1.5 million.

Mr Piery, 64, says he feels it’s time to “pass the baton” and so he is stepping down to play golf, do more walking, fishing and volunteer work.

Having seen many Town Hall events cancelled due to COVID-19, he advises his successor to be patient.

And to concentrate, which he learned early on, after showing two Chinese engineers from a sister city around town. The next day, he was told that while he had been at dinner with them, the engineers were meant to be on a plane.

“My boss told me: ‘You check, check again and check a third time.’ It was very good advice,” Mr Piery said.