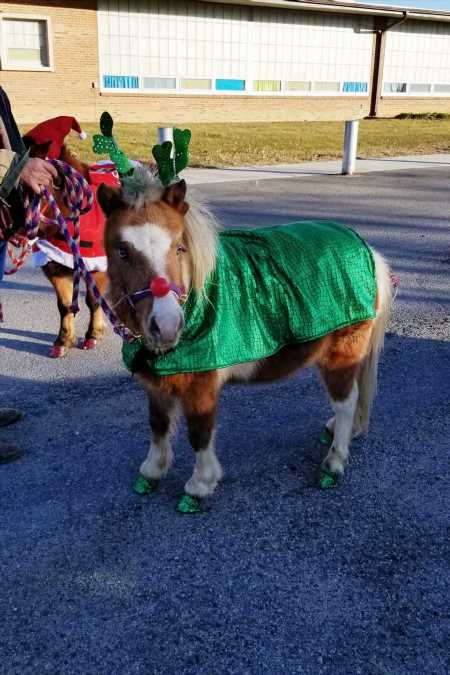 Quigley, a four-year-old miniature horse, was a local favorite in the small Missouri city of Bethany.

Last year, the 30-inch horse dressed up for the elementary school kids as Rudolph the Red-nosed Reindeer and during the homecoming parade he donned a convict costume.

“He had the prettiest blue eyes,” Quigley’s owner Steve Tharp tells PEOPLE. “Everybody loved him.”

But on Sunday afternoon, Tharp found Quigley dead shortly after the horse didn’t come to the gate for his dinner feeding.

The horse had been shot through the neck and was also found missing an eye, ear and genitals and his lower abdomen was skinned.

“You wouldn’t believe what that boy looked like,” Tharp says. “They knew how to skin. His ear was cut off at the base. And they cut his left eye out.”

Whoever did this, he says, just walked right up to him.

“He probably thought he was going to pet him and give him a treat,” he says. “He was the sweetest little thing.”

In a message on Facebook, the Bethany Police Department said they had opened up an investigation into the horse’s death.

“A report has been created and all leads are being followed up,” the post reads.

Tharp believes that the person who mutilated Quigley is “local.” A GoFundMe page called Justice for Quigley has been set up to raise funds for a reward.

“I just want justice for our boy,” Tharp says, noting that he and his wife Lisa will not stop until they get it.

“People don’t realize this isn’t about a horse, this is our baby,” he says. “The things they had done to him were unreal. We don’t want this to happen to other people. If they can do that to him, they are going to do it to someone else. How do we know one day it won’t be a kid?”

Anyone with information about Quigley’s death is asked to contact Bethany police at 660-425-3199.