Washington: In the moments immediately following the first US presidential debate between Joe Biden and Donald Trump, the hosts on CNN struggled to put into words how offended they were by what they had just witnessed.

Journalists are often criticised for being out-of-touch and accused of living in a "bubble". But in this case the CNN hosts were reflecting, in real-time, the reactions occurring in living rooms across America. 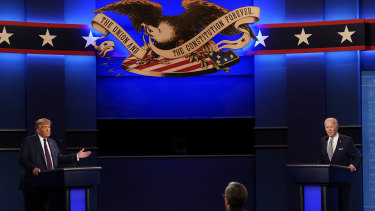 A day after the debate, Sarah Longwell, a founder of the Republican Voters Against Trump group, held one of her regular focus groups with swing-state women who had voted for Trump in 2016.

"It was embarrassing," a woman in North Carolina said.

"It was difficult to watch and finish," said a voter in Florida. "I was relieved when it was over, I was very disappointed in both of them. I don’t know if I can support either of those candidates, I lost respect for both of them." 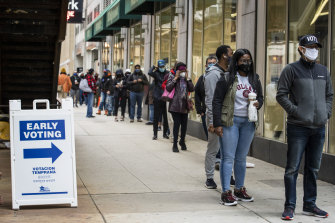 Hundreds of people wait in line to vote early in Chicago on Thursday. Credit:Chicago Sun-Times/AP

Trump’s modus operandi for the debate in Cleveland, Ohio, was to interrupt Biden as much as possible and distract him from his train of thought. But even some Trump allies conceded that the President had gone over the top with his interjections, making him look mean-spirited. A particularly vicious moment came when Trump attacked Biden’s son, Hunter, for his past drug use.

"On the Trump side, it was too hot," former New Jersey governor Chris Christie, who helped Trump prepare for the debates, told American ABC News. 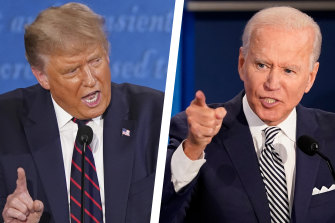 Donald Trump and Joe Biden during the first presidential debate of 2020.Credit:AP

It was Trump who went into the debate most in need of an impressive performance. Biden has been ahead by an average of seven points in the national polls for several months and has solid leads in battleground states such as Pennsylvania, Wisconsin and Michigan.

All the evidence so far suggests this week's debate did not give Trump the game-changing moment he was looking for just a month out from election day. If anything, his performance put him in an even worse position.

Polling expert Nate Silver's FiveThirtyEight website now gives Biden an eight in 10 chance of winning the election, up from seven in 10 a month ago.

For the participants in Longwell’s focus group, the moment that stood out the most in the debate was when Trump failed to deliver a forceful denunciation of white supremacists when asked to do so by moderator Chris Wallace.

"I still don’t know if I have a reason to vote for Biden, but that closed the door on voting for Trump," a woman from Florida said. "It really was appalling."

The one voter in the group who had planned to vote for Trump before the debate said: “I don’t know if I am going to stick with him. That was awful last night. I’m moving more towards the fence, I really am." 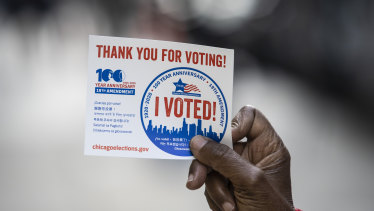 Voters queuing in Chicago said they were worried about the “chaos and confusion” that President Donald Trump has created about mail-in voting and wanted to vote in person to make sure those votes were counted. Credit:Chicago Sun-Times

In a post-election focus group hosted by Republican pollster Frank Luntz, a group of undecided voters used words such as unhinged, arrogant, forceful, a bully, chaotic and un-American to describe Trump’s behaviour. Ruthie, a voter from Pennsylvania, compared Biden's task to trying to "win an argument with a crackhead".

On Friday (AEST) Trump sent out a tweet saying: "I won the debate big, based on compilation of polls etc. Thank you!"

That isn’t true. Scientific polls conducted after the debate showed most viewers believed Biden was the winner. In a Morning Consult poll conducted the day after the debate, 50 per cent of watchers surveyed said Biden had performed best compared to 34 per cent for Trump.

A CNBC/Change Research poll found 53 per cent of likely voters nationwide felt Biden did a better job in the debate, compared with 29 per cent for Trump. Forty-five per cent of those surveyed said Trump had performed worse than they expected, while 11 per cent said that of Biden.

Which is not to say that Biden did a particularly impressive job. Some focus group participants said they were disappointed that he had taken Trump’s bait by calling him a “clown” and telling him to “shut up”.

"I wish Biden would’ve been a better foil to the President and not responded in the same terms," one of the participants in Longwell’s focus group said. "I understand why you’d tell someone to ‘shut up’ but I wish he could’ve been a contrast to Trump a little more."

When asked whether he would try to expand the number of the Supreme Court justices if elected, Biden refused to answer. He also gave a poor explanation of his plan to expand the Affordable Care Act, known as Obamacare, and made it seem as if the policy would only benefit those living in poverty.

And he said he did not support the Green New Deal climate change plan proposed by New York congresswoman Alexandria Ocasio-Cortez even though his official website describes it as a "crucial framework" for addressing climate change.

In a more conventional debate, Biden's slip-ups may have made headline news. Instead, they were overshadowed by Trump’s belligerent tactics.

"Each of them had a bad night," says Republican strategist Stan Barnes. "The silver lining for Biden is that expectations were low for him and he didn’t appear completely lost."

Among those disappointed by the debate were Republican senators worried about losing their majority in November. Democrats need to win a net four seats to take control of the Senate, and polls show them ahead in several key races.

Susan Collins, a Republican senator from Maine facing a tough re-election battle, described the face-off in Cleveland as "the least educational debate of any presidential debate I’ve ever seen".

For Republican senators like Collins, a more policy-focussed discussion on the Supreme Court and the economy would have helped their election chances more than one dominated by insults.

Following the debate, Wallace, the moderator, said he was disappointed with how it had turned out and that he wished he could have done more to stop the interruptions.

"I never dreamt that it would go off the tracks the way it did," Wallace told The New York Times.

The Commission on Presidential Debates, a non-partisan group that has organised the events since 1988, said it would tweak the format for the next debates to prevent a repeat of the chaotic first.

"Last night's debate made clear that additional structure should be added to the format of the remaining debates to ensure a more orderly discussion of the issues," the group said in a statement on Thursday (AEST), adding that it was "carefully considering the changes that it will adopt and will announce those measures shortly".

Among the measures reportedly under consideration: cutting off the candidates' microphones if they break the rules by failing to respect the time limits. The Trump campaign has said it will oppose any rule changes, raising the possibility of a stand-off with the debate commission.

The next presidential debate, scheduled for October 15, will be a town hall-style event, giving ordinary voters the chance to ask the questions. It can only be hoped that this format will produce a more substantive, less vitriolic, evening than the one in Cleveland.

Our weekly newsletter will deliver expert analysis of the race to the White House from our US correspondent Matthew Knott. Sign up for the Herald‘s newsletter here, The Age‘s here, Brisbane Times‘ here and WAtoday‘s here.