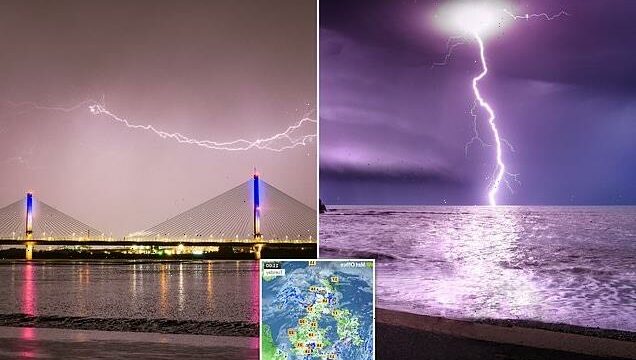 The Met Office today issued a warning to expect thundery and wet weather across large parts of the country, with showers also expected to linger throughout the week as Britain’s dry summer draws to a close.

While the onset of rain would be welcomed by Britain’s farmers after one of the driest summers on record, by mid-afternoon today temperatures could hit 25C (77F) in parts of East Anglia.

Boris’s farewell speech to the nation was already brought forward by more than an hour due to the difficult conditions as he departs Downing Street today for the final time as Prime Minister.

It is understood the outgoing PM agreed to the last-minute alteration because his trip to Balmoral Castle is now set to take longer. Mr Johnson and his wife Carrie flew to Aberdeenshire from RAF Northolt on Monday morning while Liz Truss will depart from the same airfield to meet Her Majesty at Balmoral Castle later today.

No 10 are also understood to have drawn up contingency plans for Ms Truss to launch her own premiership from inside Downing Street at 4pm with thunderstorms and even a chance of hail expected in Westminster. One aide told the Times earlier this week: ‘The weather for the early part of the week is terrible – thunderstorms.’

Despite a clear start to Tuesday for much of the country, Brits were warned to brace for a mixture of showers and longer spells of rain throughout the day.

Poor conditions are also expected in north east Scotland, where Mr Johnson and new Prime Minister Liz Truss are to hold and audience with the Queen later today.

Ellie Wilson, meteorologist at the Met Office, said: ‘It’s going to be a showery day as it has been today, especially in London, with a risk of thunderstorms particularly through the afternoon from midday onwards.

‘That’s continuing all the way until late afternoon, early evening. There’s a chance of hail too. In Scotland, a little bit of a drier start but cloudy tomorrow morning.

‘There’s a slow-moving front that’s going to move northwards through the late morning in the afternoon, which will bring some rain and drizzle over the hills. There’s also going to be some showers as well throughout the day in Scotland. 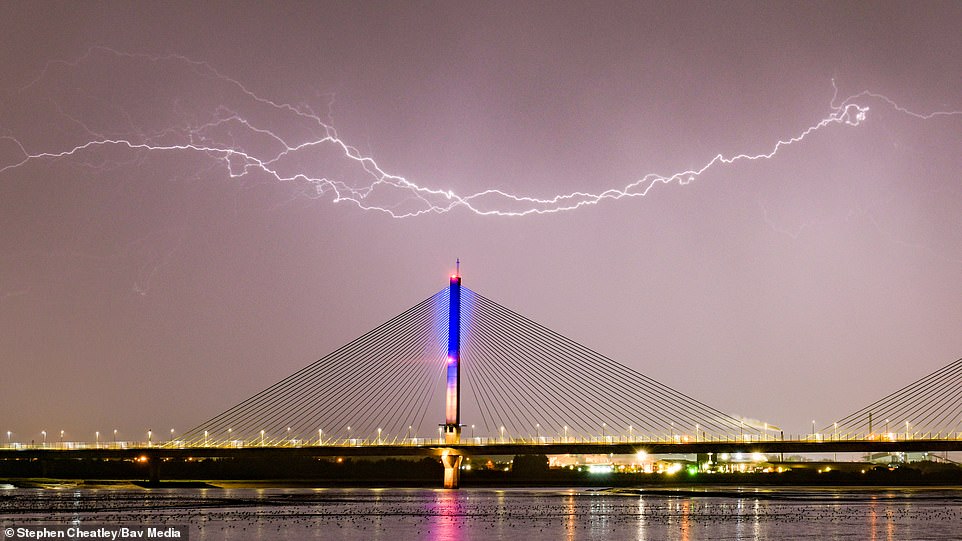 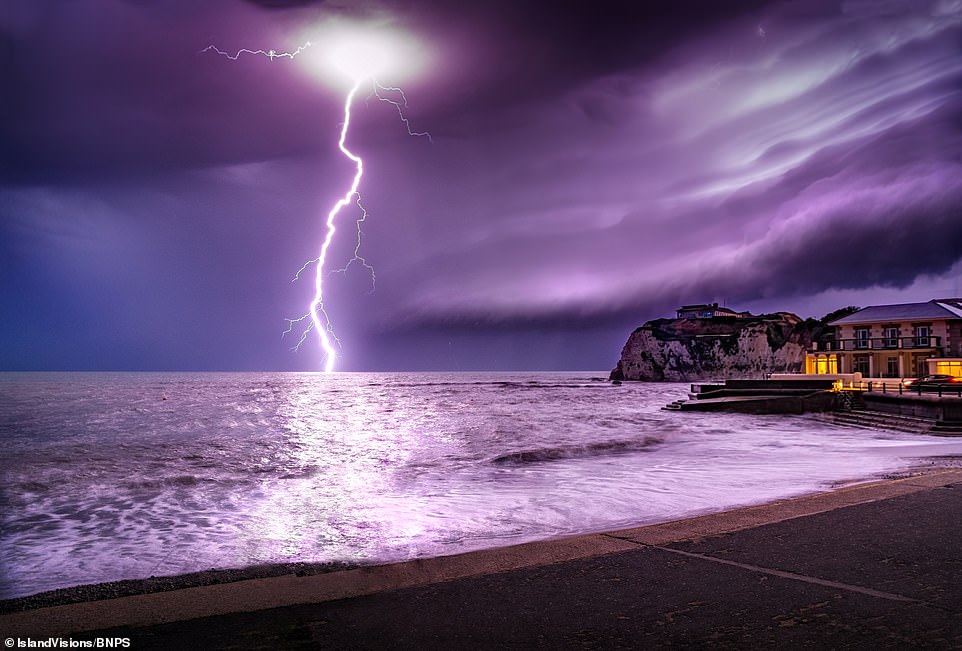 The Met Office today issued a warning to expect thundery and wet weather across large parts of the country, with showers also expected to linger throughout the week as Britain’s dry summer draws to a close. Pictured: A bolt of lightning is seen from the shores of Freshwater Bay, Isle of Wight 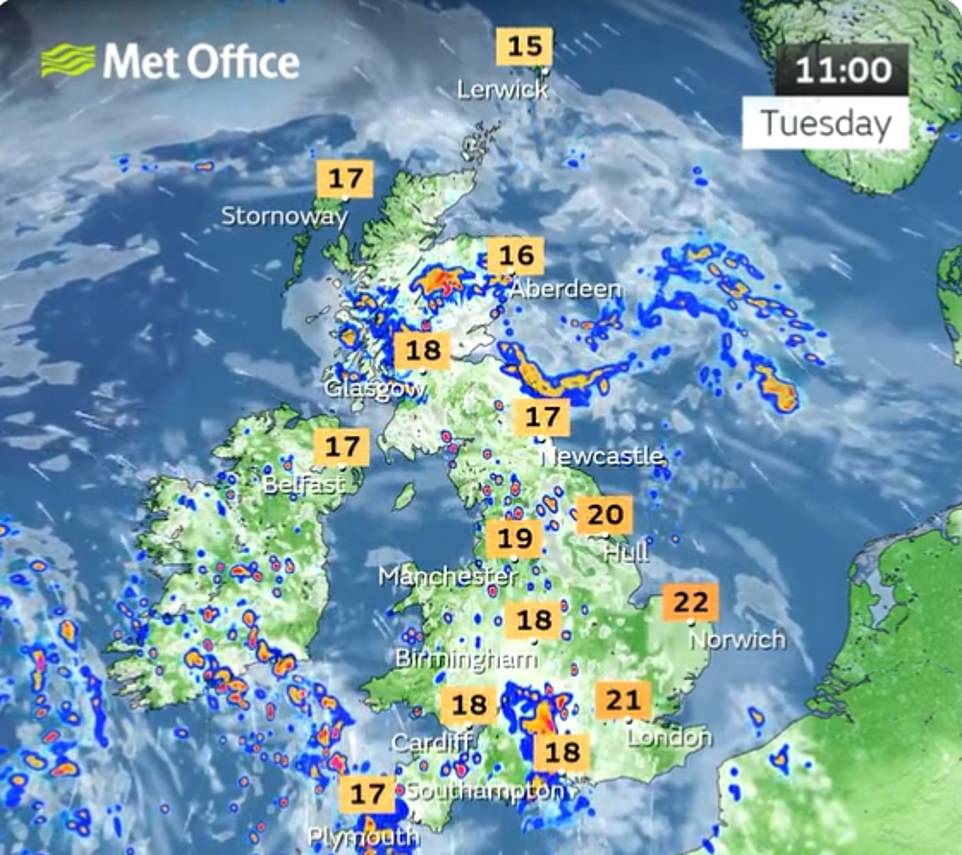 While the onset of rain would be welcomed by Britain’s farmers after one of the driest summers on record, by mid-afternoon today temperatures could hit 25C (77F) in parts of East Anglia 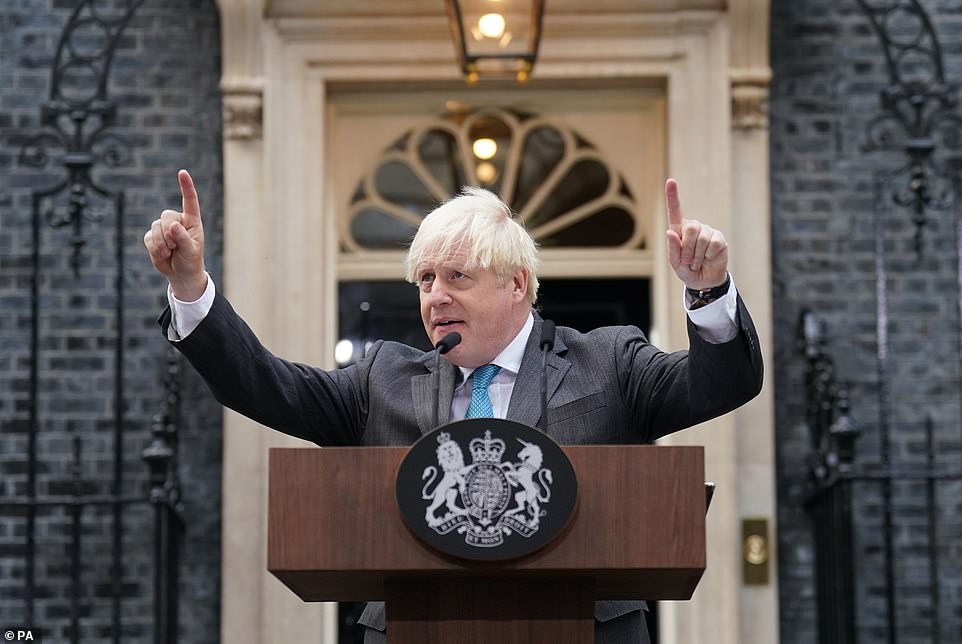 Watched by MPs, aides and allies as he spoke on the steps of No10, the outgoing PM put a brave face on his departure saying ‘this is it, folks’ 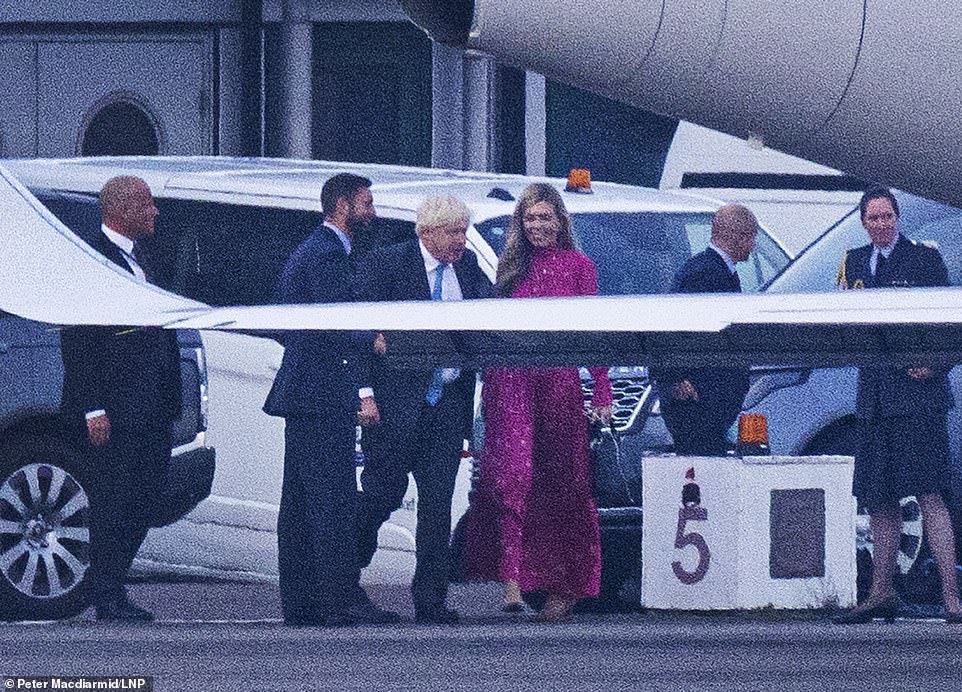 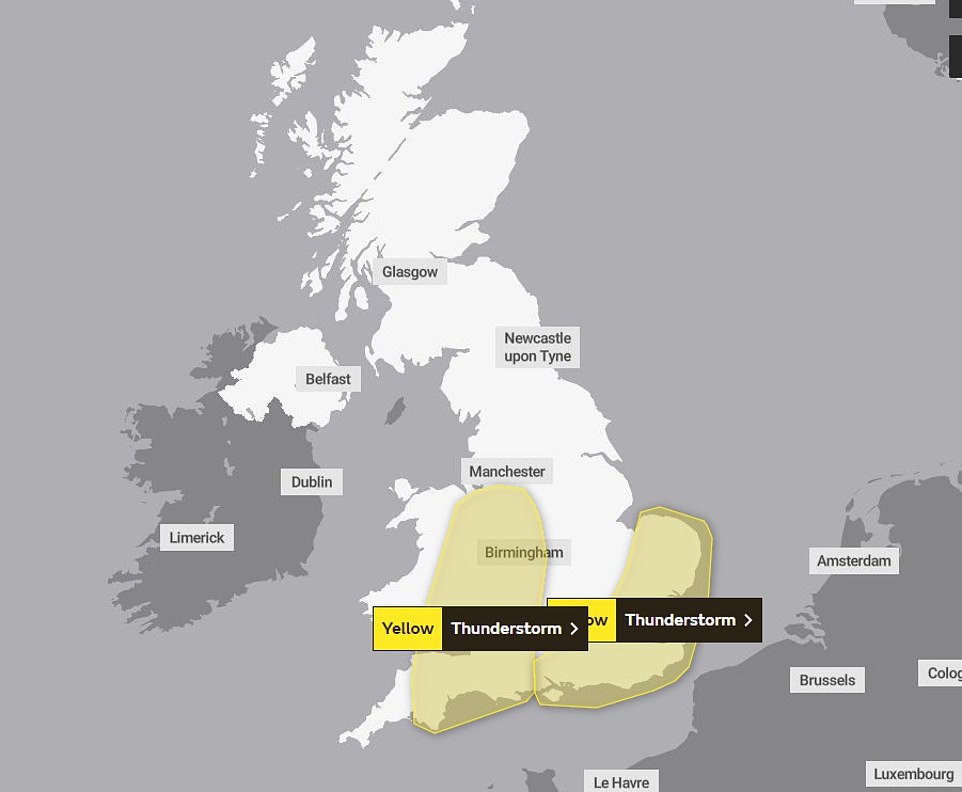 Two yellow thunderstorm warnings were in place over the UK for hours last night, and one was in place until 6am Tuesday 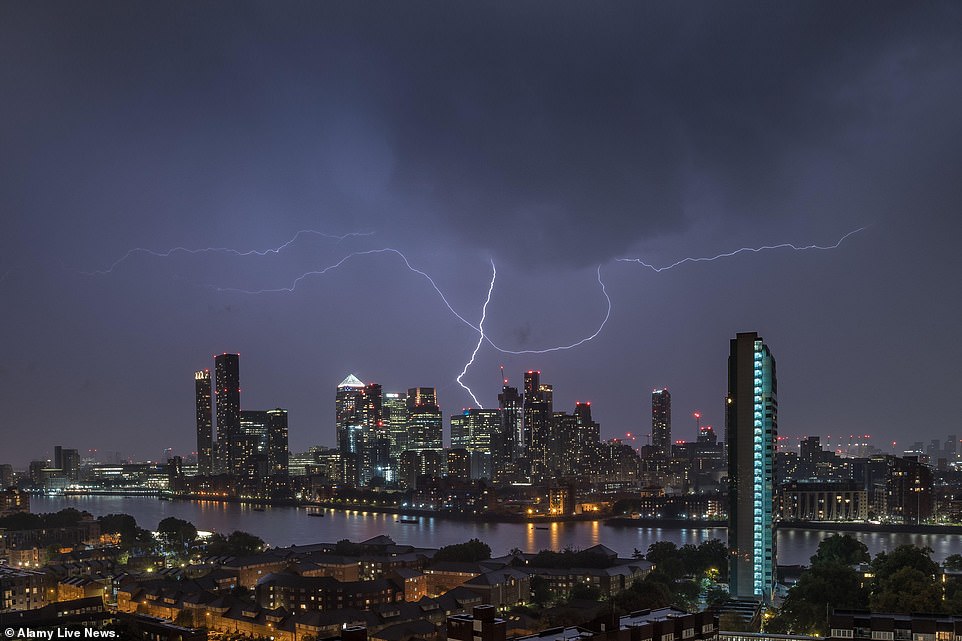 Lightning strikes over Canary Wharf business park buildings shortly before midnight on Monday, as thunderstorms are set to continue throughout Tuesday 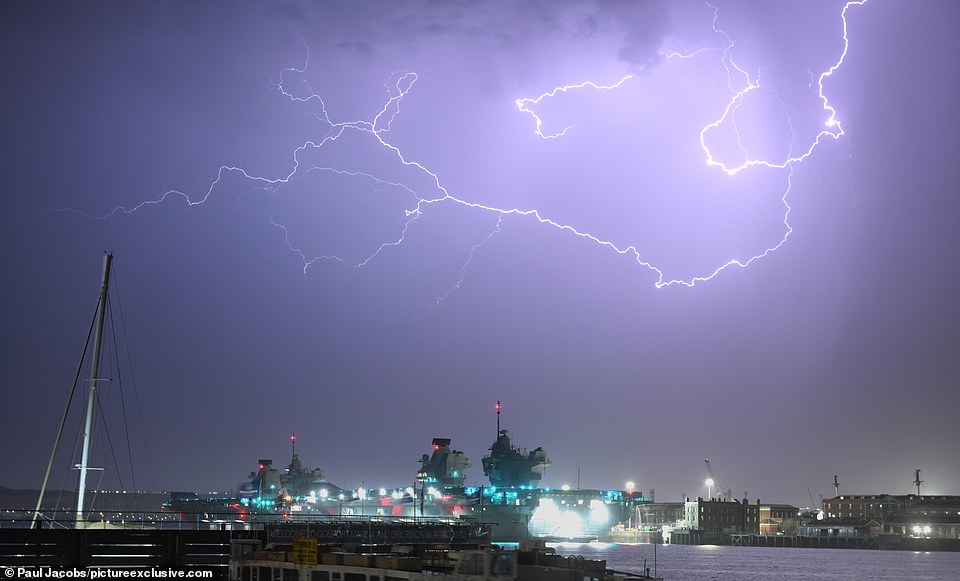 Lightning was captured lighting up the skies over Portsmouth Harbour in Hampshire on Sunday evening. More thunderstorms and torrential rain are forecast for today 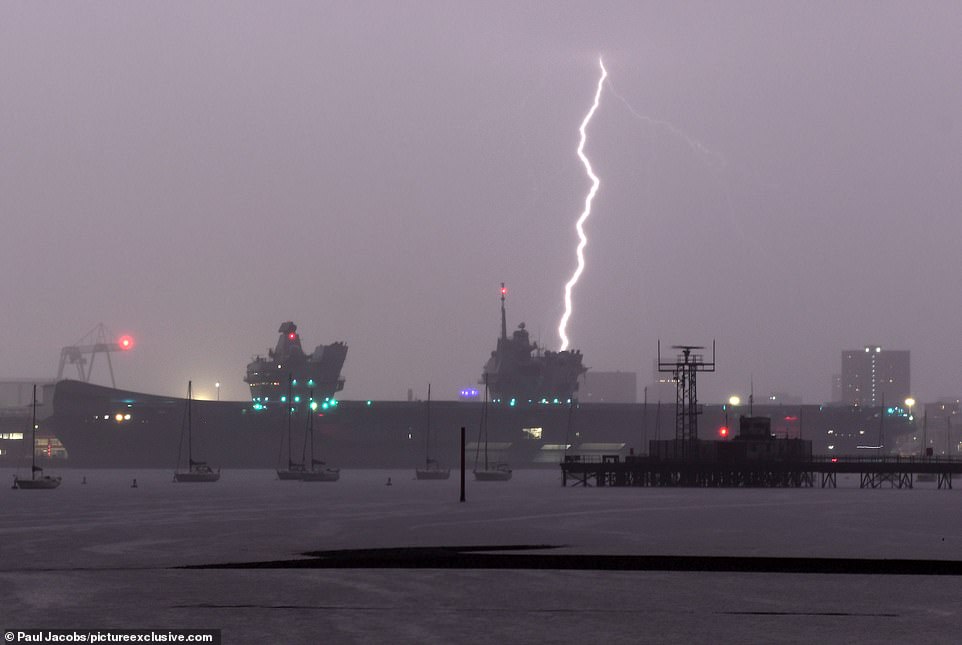 The Met office has warned that more thunderstorms are on the way after 36,000 lightning strikes his the UK on Sunday 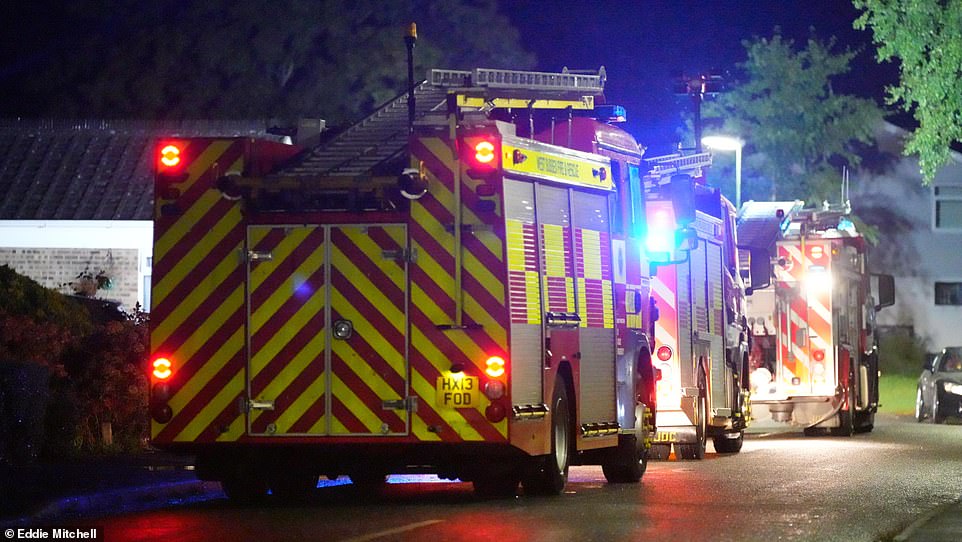 Fire engines are pictured outside a home in Littlehampton, West Sussex after lightning struck at around 10.30pm on Monday

The UK was last night battered by downpours after more than 36,000 lightning strikes were recorded across the country and more than three inches of rain were predicted to hit in some areas.

Flooding, damage to buildings and the loss of electricity to businesses and homes could also be experienced today – while motorists were warned to be wary of standing water, hail and gusty winds.

The dreary forecast forced Mr Johnson to bring forward his address to the unusually early time of 7.30am as poor conditions lingered into Tuesday and could affect his flight to see the Queen in Ballater, Aberdeenshire.

Under normal circumstances, the pomp and drama of the appointment is mostly in London over the course of an afternoon, with the outgoing premier speaking outside No 10 before a short car ride to Buckingham Palace.

But this time in a break with tradition, the departing and incoming prime minister will both have to make the 500-mile journey to the Queen’s Aberdeenshire retreat due to concerns over the 96-year-old monarch’s mobility.

Palace aides last week revealed that the 96-year-old monarch will receive Mr Johnson along with Ms Truss at her residence in the Scottish Highlands, where she is on her traditional summer break.

The Queen traditionally holds audiences with outgoing and incoming premiers at Buckingham Palace in the capital – but Mr Johnson and the new Conservative leader, who will be asked to form a government, will travel to Balmoral instead. There is also expected to be a virtual Privy Council meeting the following day.

Miss Truss and Mr Johnson are expected to fly to Aberdeen on separate planes – a journey likely take a couple of hours, with concerns that poor weather could result in it taking longer than usual.

Buckingham Palace confirmed the outgoing PM is due to see the monarch, 96, at Balmoral in the Cairngorms at 11.20am – and Royal aides are famously sticklers for timings.

Mr Johnson will be followed swiftly into the royal residence by Liz Truss, who will officially be asked to form a Government as prime minister.

It comes as the Met Office’s yellow warning was in place across southwest England and Wales last night with extreme weather and heavy downpours spreading northwards and up towards Scotland throughout the evening and early morning.

On Monday night, storms raged in large parts of the country – including south-east England, south-west England, most of Northern Ireland, Wales, the east of England, Northamptonshire and Warwickshire.

‘Some clear spells ahead of this, but low cloud will begin pushing into northeastern coasts of Scotland. With an area of low pressure slowly moving across the UK this week, the weather will remain unsettled.’

The Met Office has also forecasted challenging conditions throughout the remainder of the week.

‘By the time we get to Thursday, that low pressure is moving in across the UK. The isobars just perhaps starting to open up in places.

‘It could be quite windy across the southwest on Wednesday night for sure, but otherwise, as this low moves in, what we could see is the showers become more slow moving so they last a little longer and they could drop more rain.’