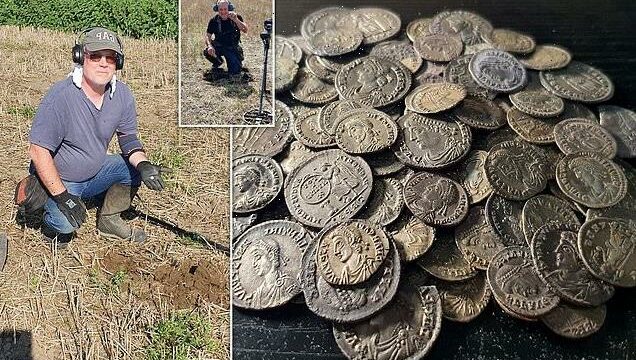 Three metal detectorist friends who stumbled upon a hoard of more than 150 Roman coins dating back to 340 AD are set to make £40,000

A trio of metal detectorists who discovered over 150 Roman coins in Pewsey, Wiltshire are set to make £40,000.

The band of friends were camping near the ancient village when they dug up the buried treasure just 6ft from where they chose to pitch their tent.

At first Robert Abbot, 53, thought he had found a boring handful of old metal tent pegs which activated his metal detector, but hidden just below was a valuable silver Roman Siliqua coin.

Rob, who owns a computer shop in Essex, said: ‘We were so excited and we’re looking forward to the auction, but we have no idea how we’ll spend the money.’ 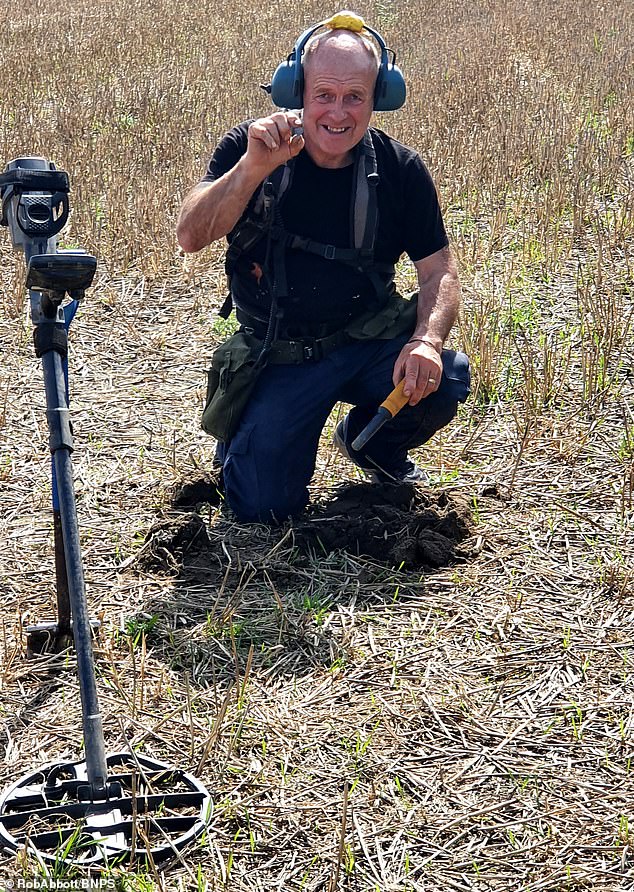 Mick Rae from Wiltshire (pictured) holds up a coin from the hoard, picture taken by Rob Abbot from Essex who first discovered the ancient silver coins under a handful of metal tent pegs 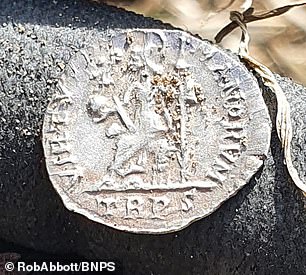 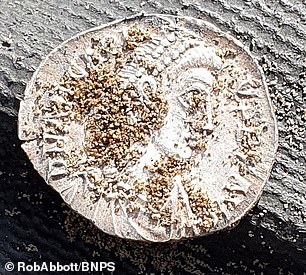 ‘Having finished breakfast first, I turned on my machine and having walked around six paces from the tent, I found several tent pegs and just under the surface a late Roman silver siliqua in pristine condition.

‘A few moments later beside it, I found another one.

‘Ironically, we had been camping there two weeks previous for a week-long detecting outing. What we hadn’t realised is we’d actually camped right on top of the area where the coins were found.’

His detector went into a frenzy and with the help of friends, Dave Allen, 59, a carpenter and Mick Rae, 63, a dairy herd manager they frantically dug up dozens of the ancient Roman coins.

By the end of their weekend camping trip they had uncovered 161 silver coins, all around 1,600 years old, which they carried home in their washing up bowl.

The coins, which date from 340 to 602 AD would have been buried when Anglo-Saxon invaders overran Britain in the final days of the Roman empire.

The ‘Pewsey Hoard’ is now tipped to sell for £40,000 and the coins will go under the hammer at London-based auctioneers Noonans in Mayfair.

Nigel Mills, a coin specialist at Noonans, said the coins were in ‘mint’ condition.

He said: ‘Virtually, all of the coins are in mint condition and have not even needed to be cleaned since their discovery.

‘The hoard was buried at a time when Roman rule in Britain under the Emperor Honorius was no longer viable with the army being recalled to protect other provinces.

‘In AD 410 Britain was told to protect itself by Honorius. As a result Britain has become a treasure island of late 4th century and early 5th century gold and silver Roman coin and jewellery hoards as the local population buried their valuables and then fell victim to Saxon raids.

‘Detector finds in recent years include the Thetford and Hoxne hoards.’

Rob, who discovered the hoard said: ‘Unbelievably I don’t actually have any photographs of myself finding any coins. I think everyone else was too excited to be taking pictures! ‘

The ancient treasures are valued at £40,000 (Pictured) Dave Allen finding one of the coins