As secret state government modelling suggests the current wave of coronavirus could rival January’s Omicron wave, which peaked at 1200 patients, and staff are bracing for the worst as they apply the lessons of the pandemic on the fly. 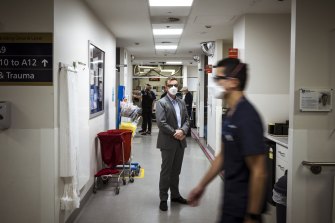 About half of those presenting in the hospital’s emergency department with coronavirus were being admitted.

“At the start of the year, Omicron was a disaster that sort of came and went in a real flash,” Putland said. “This wave is coming slowly, and it’s going to be a few hard months ahead.”

In a new measure aimed at reducing ambulances ramping, the Royal Melbourne Hospital is working with Ambulance Victoria to open up a separate space in the emergency department where patients who arrive by ambulance can be assessed and left in the care of hospital staff, allowing paramedics to quickly get back on the road.

It is an initiative the Victorian Ambulance Union wants adopted widely to reduce ambulance ramping and delays that have been linked to more than 20 deaths during the pandemic.

On Wednesday, coronavirus hospitalisations in Victoria hovered at 739 and active infections lingered at almost 60,000. There has been an 83 per cent increase in the number of Victorians in hospital with COVID-19 over the past three weeks.

Workforce shortages continue to cripple the healthcare system and some hospitals are operating on skeleton staff. In regional areas, a third of staff are furloughed on any given day, according to the Victorian Healthcare Association that represents the state’s public hospitals.

The association said more than 10 per cent of staff were unavailable in some metropolitan services, but senior hospital sources, not authorised to speak publicly, estimated it could be double that.

Statewide, 1923 public hospital staff are unavailable to work due to COVID-19.

Putland said much had been learnt from the first Omicron wave and the Delta outbreak.

“During Delta we had half of the population who was vaccinated, half wasn’t, and we saw some terribly, terribly unwell patients coming into the ED and dying of COVID as they arrived,” Putland said.

“We now have an understanding of what COVID looks like in a vaccinated population. We know there will be people very badly affected by it. Often people who are vulnerable or who have left it too late to get their booster.”

In Melbourne’s north, the Northern Hospital has opened a 12-bed modular facility in response to rising coronavirus presentations.

The hospital is also expanding its virtual emergency service, which has been providing care for hundreds of Victorians with non-life-threatening conditions.

Australian College of Critical Care Nurses chief executive Rand Butcher said intensive care units across the state were at capacity, or had already exceeded it.

“Every hospital is struggling for staff,” he said, noting nurses received texts daily asking for them to do double shifts or fill gaps in the roster.

At Royal Melbourne Hospital, a senior doctor now permanently oversees the emergency department triage until late at night. The new role was created to ensure a doctor examines patients arriving by ambulance and those filling corridors in trolleys.

“We’re doing everything we can to try and provide timely care for patients while they’re stuck waiting much longer than we would like,” Putland said, adding the triage doctor can provide care outside the traditional emergency department setting and send patients home when it is safe to do so.

The triage doctor is supported by extra nurses, one who cares for patients filling hospital corridors, and another who keeps a watchful eye on patients in the waiting room.

A team of final-year medical students has also been deployed in Royal Melbourne Hospital’s emergency department to help stretched nurses.

But emergency physician Simon Judkins, who also sits on the board of the Australian Medical Association, said deploying triage doctors to emergency wards was merely “managing a symptom rather than providing a cure”.

There was still not enough staff and available beds in other areas of the hospital to take those coming into emergency who needed further care, he said, while most hospitals did not have extra doctors to staff emergency wards.

Judkins confirmed that intensive care units had reached maximum capacity in hospitals across Melbourne, a deterioration forcing the sickest patients onto waiting lists for critical care. 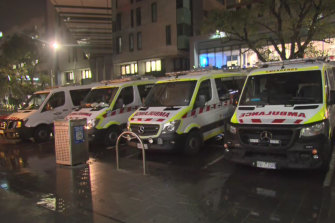 “Now, with the pressures in the system, you actually have to be deteriorating before you go into intensive care.”

Putland urged anyone eligible for a third or fourth vaccine dose to get a shot urgently.

“If you haven’t heard a third dose yet, for goodness’s sake, go get it done, so we can continue to make this a disease that is in the background rather than one that’s killing people unnecessarily,” he said.

He also urged Victorians to wear their masks when they could not socially distance.

People who need emergency care are urged not to delay coming to hospital.

“But at the same time, if you don’t need the care of a hospital and you can get your care some other way, don’t treat your local hospital as a convenience store,” Putland said.

“Go and see the GP if you can and only call ambulances if you need them.”

A Department of Health spokeswoman said the next few months were “going to be tough on our health system – with COVID demand not going away and ongoing demand from influenza and other respiratory issues, trauma or deferred care”.

She said the state was “investing billions to address this ongoing demand, including through the $12 billion Pandemic Repair Plan to get more paramedics on the road, more triple zero call takers, expand emergency departments, and the training and recruitment of up to 7000 healthcare workers to reinforce our health system” and that “the department continues to work closely with health services to monitor pressure and demands, and provide support to generate more bed capacity and prioritise resources”.