Don’t rubbish Daisy Noyes. She’s already rubbished herself, her friends and her children. And she’s the first to admit her work stinks.

The Brunswick photographer has for the past year been collecting litter from Merri Creek, in Melbourne’s northern suburbs, and fashioning it into dresses for her, her friends and her two sons to pose in for her latest series. 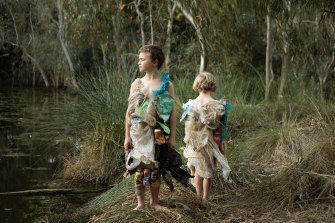 Photographer Daisy Noyes makes dresses out of rubbish she collects from Merri Creek. She and her sons Marlow, 6, and Augie, 8, model them by the creek for her photo series on climate anxiety.Credit:Daisy Noyes

“They really stink,” she says of her works of bricolage, a style of art that uses found objects as the medium.

“They have all kinds of mud in them, earthworms.”

Noyes, who grew up in New York State but has lived in Melbourne for 20 years, came up with the idea during her daily walks with her sons along the creek during lockdown this time last year.

“I was coming here every day and I was noticing how much rubbish was in the water … there’s a lot more single-use plastics being used in COVID-time. I was picking it up and was not wanting to throw it away.”

She began collecting materials including plastic bags, cans, bottles, even dog poo bags – “there’s lots and lots of them” – and stitching them together to create the dresses, which her models wear for shoots at the creek banks where she found the litter.

The result is a series of images, taken across the northern suburbs of Faulkner, Thornbury and Coburg, that land somewhere between woodland elf clad in refuse, and post-apocalyptic punk.

“I wanted to make a series about how to deal with my own eco-anxiety, what we’re doing to the land,” she says. “First it was me wearing them … but then I started using other people and my kids – I’ve probably made 10.” 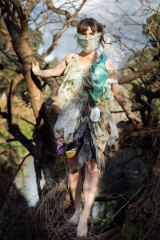 Noyes plans to expand her project to other waterways when the five-kilometre travel restrictions lift.Credit:Daisy Noyes

Her sons, Marlow, 6, and Augie, 8, were only too keen to get involved in the project, having long been subjects in their mum’s work. “They’re really interested and involved in the whole process. They are here with me picking up rubbish,” Noyes says.

“They said, will this help clean up the creek? I said, ‘I don’t know, but it might.’ They were really into it.

“It brings in the idea of them, the next generation, wearing the rubbish of this generation.”

A significant challenge of the project was the reeking filth clinging to Noyes’ medium. “[I thought] how am I going to disinfect these? I’m wearing that stuff, or asking other people to wear it. The Merri Creek has sewage.

“I was drying it in the back garden. I was spraying them with Dettol.

“Nobody got weird rashes or gastro or anything, thankfully.”

Noyes understands people might think her work is odd, but she says that’s the point.

In a week when the UN’s Intergovernmental Panel on Climate Change called a “code red for humanity” as it reported global temperatures could hit 1.5 degrees above pre-industrial levels by 2030, meaning worse and longer fire seasons, droughts, flooding and rising sea levels, Noyes notes that wearing couture made from rubbish doesn’t seem like the maddest thing going on in the world.

“I don’t think it’s as crazy as what we’re doing to the earth right now. I feel like in some ways I’m trying to match the craziness of the climate inaction,” she says.

“Most of us are terrified about climate change, more floods, more fire, dirty water … It feels to me like the only way to deal with it aside from sticking your head in the sand is taking small actions … I want to contribute to a larger conversation about what do we do with our distress – and what do we do with our creek.”

Noyes previous work has mostly been about her personal life, most recently motherhood in isolation and feelings of confinement. “[This is] definitely much more overtly activist than anything I have done before.”

Previously she gained the most traction with a series called 71 self portraits in isolation.

As for the hardiness of the rubbish dresses, Noyes emphasises that her art is ephemeral.

“The plastic is coming apart already. They are definitely not utilitarian. [After the shoot] I am recycling the soft rubbish and the hard rubbish – it’s just about the art and the conversation.”

When lockdown and five-kilometre travel restrictions lift, Noyes plans to expand her work to other Melbourne waterways.

“I would like to do a Yarra dress and a Port Phillip [Bay] dress,” she says.

“It would be great to get enough masks and gloves to do a full COVID-waste dress – that would be really gross.”