Washington: A year-long trade war between the United States and China is proving to be an initial skirmish in an economic conflict that may persist for decades, as both countries battle for global dominance, stature and wealth.

Progress toward a trade agreement nearly collapsed this past week, with both sides hardening their bargaining positions. And even if a trade deal is reached, it may do little to resolve tensions between the world's two largest economies. 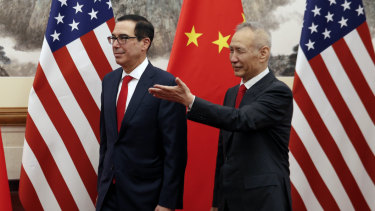 Chinese Vice Premier Liu He shows the way to US Treasury Secretary Steven Mnuchin during their meeting at the Diaoyutai State Guesthouse in Beijing.Credit:AP

The United States is increasingly wary of China's emerging role in the global economy and the tactics it uses to get ahead, including state-sponsored hacking, acquisitions of high-tech companies in the United States and Europe, subsidies to crucial industries and discrimination against foreign companies.

The Trump administration has begun trying to limit China's economic influence in the United States and abroad, warning about China's ambitions in increasingly stark terms. Secretary of State Mike Pompeo compared China's ambitions to Russia and Iran in a speech in London on Wednesday, saying Beijing poses "a new kind of challenge; an authoritarian regime that's integrated economically into the West in ways that the Soviet Union never was".

The United States has been erecting barriers to limit Chinese investment in US companies, re-examining the kinds of technology that can be exported to China and restricting China's role in building America's next-generation telecommunications networks, while also discouraging other countries from using Chinese equipment.

The FBI has increased its scrutiny of Chinese researchers in the United States over fears they may be acquiring intellectual secrets. A Justice Department initiative is targeting commercial espionage of US technology, and earlier this year, the United States unveiled a sweeping indictment of Chinese telecom giant Huawei and its chief financial officer, Meng Wanzhou, over accusations of stealing trade secrets and evading US sanctions on Iran.

China, whose ambition is to dominate industries of the future, is pushing back. A column on Saturday in the Communist Party's People's Daily newspaper stated, "The United States is again waving the club of tariffs after misjudging China's strength, capacity and will, further escalating trade friction between our two countries."

The piece was written under the pen name Zhong Sheng — the "voice of China"— a name used when the paper publishes comments on foreign affairs that are authoritative.

Restraining China's ambitions and methods is a tricky task — and there is concern that the Trump administration's effort is creating a new red scare, fuelling discrimination against China and its citizens that could ultimately hurt the United States. As many as 30 Chinese professors have had their visas to the United States cancelled in the past year or been put on administrative review, according to Chinese academics and their American counterparts.

"We've got decades of painful negotiating with China ahead," said David Lampton, a China scholar at Stanford University. Lampton said a trade deal, if reached, would do little to resolve the bigger conflict. "It's just a skirmish in an ongoing battle." 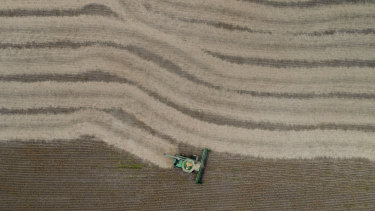 The soybean industry is one of the areas that will be most obviously affected by a trade deal.Credit:Bloomberg

Chinese negotiators returned to Beijing over the weekend without a trade agreement and with even larger economic barriers between the two countries. The Trump administration raised tariffs on $200 billion in exports Friday and said it would move ahead with the legal process of taxing another roughly $300 billion of products at the same 25 per cent rate.

The two countries could yet come to an agreement that opens opportunities for businesses and rolls back the levies they have placed on each other. Both US and Chinese officials said Friday that they would continue to talk and could meet in Beijing next month. Liu He, China's Vice Premier, called the failure to reach a deal "just a small setback in the talks between two countries," while Trump, in a tweet, described the talks as "candid and constructive".

While a trade deal could calm some tensions and establish more good will between the two nations, it is unlikely to achieve many of the ambitious goals that the administration has set for itself. Trump's advisers, in particular the US trade representative, Robert Lighthizer, have been focused on what the administration calls China's practices of "economic aggression".

But the administration has struggled to address the immensity of the problems in the text of a trade deal. People close to the talks say that the negotiators appear powerless to force any changes that aren't in China's interest.

Liu, who is leading China's team in the trade negotiations, hinted at that uphill battle in a video statement released by the official Xinhua news agency.

"Now both sides have reached consensus in many respects, but frankly there are also areas of disagreement," he said. "We believe that these are major matters of principle, and any country has its own important principles — we can't make concessions on matters of principle."

Despite punishing tariffs already on nearly half of Chinese exports to the United States, Beijing is still resisting many of the most significant changes the administration seeks. It has been reluctant to roll back subsidies for advanced manufacturing industries or to make public commitments to stop cybertheft.

Instead, a trade deal between the two countries seems more likely to bring change around the margins — tens of billions of dollars of soybean purchases, some tariffs lifted and changes to the text of Chinese laws or regulations that the country might ultimately disregard, particularly once another administration occupies the White House.

"This is a decades-long endeavour," said Robert Daly, director of the Wilson Center's Kissinger Institute on China and the United States. "This can't be waved away over cake at Mar-a-Lago."

Many in China have sought to avoid a trade conflict, which could have a larger impact on their economy than the United States'. But they have long thought the United States would have a difficult time accepting a true peer in economic, technology and military power, so consider the management of conflict with the United States to be an inevitable result of their own rise.

While the Trump administration accused China of breaking a trade deal, China's resistance to the emerging terms stemmed from its belief that the United States was asking too much and offering too little in return. Many of the changes the United States seeks would limit what Chinese officials regard as a tried-and-true approach of using tens of billions of dollars from state-owned banks and government investment funds to turn previously small industries like car production or solar panel manufacturing into the largest industries of their kind in the world.

And the Chinese view some of the Trump administration's demands as infringing on their sovereignty and giving America too much power over their economy — including requiring the country to codify changes through legislation in the National People's Congress. To the increasingly nationalistic public in China, the US requests are reminiscent of a 19th-century history of unequal treaties forced on the country by foreign powers.

Trump on Saturday suggested China was simply delaying a deal in the hopes that a Democrat would win election in 2020 and continued his pugilistic approach, saying "the deal will become far worse for them if it has to be negotiated in my second term. Would be wise for them to act now, but love collecting BIG TARIFFS!"

In the United States, China's unwillingness to bow to America's demands is uniting lawmakers like the Democratic Senate leader, Chuck Schumer of New York, and Republican Senator Marco Rubio.

While US companies have long hankered for access to China's growing market, their position has begun to shift as they see China's practices and treatment of foreign companies. A survey released by the US Chamber of Commerce in China in February showed that the majority of its members favoured retaining tariffs on Chinese goods while trade negotiations continued.

China's own experts say that the Beijing leadership has been caught off guard by the pace of change in US perceptions of Sino-American relations.

"Even if there is some kind of agreement between Xi and Trump, in the long run the strategic bilateral relationship is already in trouble," said Zhang Jian, a professor in the School of Government at Peking University, referring to President Xi Jinping. "There is no coming back, even if there is a deal."