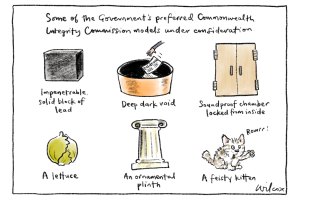 To submit a letter to The Age, email [email protected] Please include your home address and telephone number.

The ’G comes alive, again
Despite the case numbers and the hiccup scare, one could flash back to the 1998-99 Ashes series and feel how the MCG should feel and sound.

The winner in 2021 was the MCG crowd – alive again the day I attended – the Mexican wave transpired, the beach balls bounced through the crowd and Bay 13 evictions occurred with cheers unfortunately, but the good-humoured Bairstow appreciated his Fab Club at fine leg. It was great to feel the atmosphere at the ’G again not letting COVID dampen the party. One can only hope we can continue to glimpse life as it was as we all get third doses.
Julian Collins, Ormond

Our social housing need
It’s embarrassingly disturbing to read Social Housing Regulation Review chair David Hayward’s declaration that “most people eligible for social housing aren’t in it” (“Review calls for social housing regulator to protect tenants”, The Age, 28/12). The review of Victoria’s social housing system recommends a single regulator oversee all public and community housing and tenants’ rights be protected in legislation. I welcome the Victorian government’s $5.3 billion allocation last year for social housing but it’s long overdue. The business case for public housing is a no-brainer with a return of $1.40 for every $1 invested. The socio-cultural case is equally powerful as an accessible housing policy will future-proof the country from health and disability challenges. Wouldn’t it be marvellous if the federal government matched the Victorian government’s actual investment dollar for dollar?
Father Kevin F. Burke, Sandringham

Local tourism the winner
The only good news for Victoria about the COVID-19 pandemic and its continuing spread, nationally, is that it will inevitably mean more Victorians will holiday in their own state. Primarily, because of the burdensome demands placed on those wanting to travel interstate, bringing overdue benefits to the local tourism industry.
Michael J. Gamble, Belmont

Leadership wanting
With government health bureaucracies it’s always too little, too late: culpably slow and confused in ordering and distributing vaccines initially, callously incapable of understanding the mental toll of lockdowns and unbelievably reluctant to consider replacing the unwieldy and slow PCR with quick and simple RA tests.

They’ve got excuses and improvised interpretations of science aplenty to defend their hegemony but RAT kits should have been ordered and distributed nationwide six months ago. And it’s all due to a total lack of leadership at the national level.
John Laurie, Riddells Creek

Shame on ALP executive
For the ALP to target and remove Frank McGuire from the Victorian seat of Broadmeadows leads someone like me, a longstanding supporter of the party, to despair at the stupidity of those wielding power. This man wears his heart on his sleeve, not only for his constituents in one of the most under-privileged electorates in the country, but for his commitments as a parliamentary secretary in the areas of crime and medicine.

No, I am not a Broady resident. I live in the wealthy, leafy eastern suburbs, but how I wish we could have someone of his calibre representing us. The ALP national executive should hang their collective heads in shame.
Sheryl Dabb, Ashburton

Mask wearing applauded
I understand that we have to learn to live with COVID, however, Omicron has presented a new challenge we must address albeit without the harshness of previous restrictions. I noticed that at the Melbourne Test cricket and Queensland BBL there were no masks worn by spectators but, at the Tasmanian BBL, masks were worn. Wearing masks is a minor inconvenience but an acknowledged significant prevention in assisting with the spread of COVID. Not everyone will agree with its border entry requirements but the Tasmanian government should be applauded for its scientifically based, non-political approach to managing public events.
Ken Finley, Mount Martha

Make test kits free
As state leaders struggle to provide testing services needed by people with symptoms of COVID and others wishing to travel, there is one simple thing the government could do. Rapid antigen testing kits should be distributed free to each Australian. At present these are virtually impossible to find. If the federal government wants to do more than oversee the vaccine strollout that can’t even get aged care residents a booster shot for a month, it could put taxpayers’ money to good use and distribute the tests now.
Juliet Flesch, Kew

Testing anomaly
“State eyes rapid tests as path out of isolation” (The Age, 27/12) states that people “exposed to COVID-19” could be released from isolation by using rapid antigen tests rather than queueing for a PCR test. Why, particularly as they have been exposed to the virus? My wife and I returned from the UK on Christmas Day after an enforced two-year exile. We have been triple vaccinated, PCR tested before travel, given a permit to enter Victoria and yet we have to continue to quarantine until we receive our arrival PCR test results. Since Christmas Day, we have tested daily with rapid antigen tests and each time have received negative results. How many days must pass before we get our arrival PCR result? We then must take another PCR test but people who have been exposed to the virus are not required to do this.
Chris Sullivan, Mount Eliza

US ‘sun’ is setting
Ross Gittins’ plea for Australia and Australians to stop aping America will fall on deaf ears (“This isn’t America, so please stop acting like a Yank”, The Age, 27/12). Indeed in the decade ahead, the American influence will likely deepen and broaden. However, it is best thought of as the flare-up on the horizon and sky as the sun sets. The US sun is setting as this century unfolds, and other influences economic, intellectual, social and cultural will increasingly brighten and darken the sky.
Stewart Sweeney, Adelaide, SA

Vale Desmond Tutu
Vale Desmond Tutu, man of the people and of God. I recall him speaking to 2500 young people in Melbourne without notes for 45 minutes and his audience was captivated by his words of wisdom and honesty. When asked a question about sexuality he replied by saying sometimes the church gets it wrong. Rest eternal Desmond.
Ray Cleary, Camberwell

Long memory
One can only assume that Resolve Strategic did none of its surveying (“Frydenberg ‘most liked politician’, The Age, 28/12) in Victoria. The disgraceful anti-Victoria comments of Mr Frydenberg during the 2020 COVID outbreak will long resonate in the memory of many.
Robert Brown, Camberwell

The wrong question
If I’d been asked “do you like your federal member Josh Frydenberg?” I’d have answered “he seems very nice”. However the important question is “will you vote for him?” My answer is no. Issues that are important to me such as climate change, asylum seekers, equal representation of women in Parliament and decent behaviour in Parliament are ignored by the Coalition.
Belinda Burke, Hawthorn

Politics
Were the 1600 voters who liked Josh Frydenberg from NSW? They surely couldn’t have been Victorians.
Ingrid Rodger, Williamstown

After two years of the pandemic, Josh Frydenberg tells us the government is “looking at its options”.
Ross Hudson, Mount Martha

Forget “likes” and “dislikes”. The most telling takeaway of the Age’s “popularity” survey is the “don’t knows” and “don’t cares”.
Bernd Rieve, Brighton

PM! Stop acting like muggins and listen to Greg Mullins (The Age, 27/12), who clearly describes our climate dangers and the need to cut our emissions by 50 per cent by 2030.
Greg Curtin, Blackburn South

Ivan Glynn (Letters, 28/12) asks how to be involved in politics. There is an alternative to joining one of the major parties. He should read the Greens policies, especially on the climate crisis.
Barbara Trauer, Northcote

Furthermore
Will we be celebrating “Disunited States of Australia” on January 26?
Joan Segrave, Healesville

Yes we can live with COVID. The real challenge – living with a carbon budget and our imperilled biodiversity.
Jenny Smithers, Ashburton

It’s time to add some fresh Ashes to the urn. There’s been another death of English cricket.
John Walsh, Watsonia

Here I am stuck at home on crutches waiting for a knee replacement – and the third Test is all over in 2 days. Can we have a replay so I’ve got something to watch for the rest of the year?
Ron Burnstein, Heidelberg

Finally
Archbishop Desmond Tutu’s death is a sad reminder of how desperately our world is in need of leaders with vision and compassion.
Bruce McMillan, Grovedale