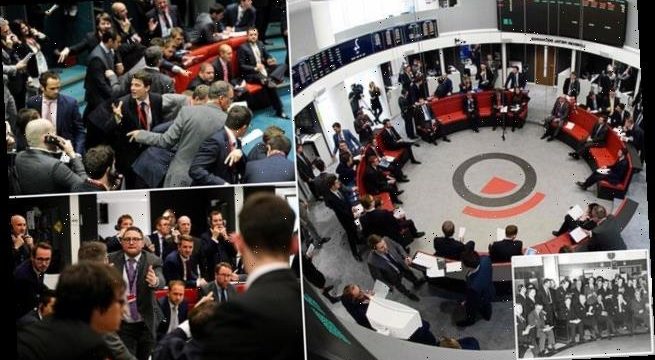 For whom the final bell tolls: The City’s last ‘open outcry’ trading ring at the London Metal Exchange could be silenced after 144 years

The site where traders shout at each other across the floor to set the world’s metal prices has been shut since Covid struck in March.

But bosses at the LME now believe it is the ‘right time’ to permanently close the open outcry structure – known simply as ‘The Ring’.

While closed due to the pandemic, the Finsbury Park-based exchange has modernised trading to keep in line with social distancing measures.

Under the plans the LME will move away from open outcry trading and towards an electronic system – like those used in other industries such as share trading. 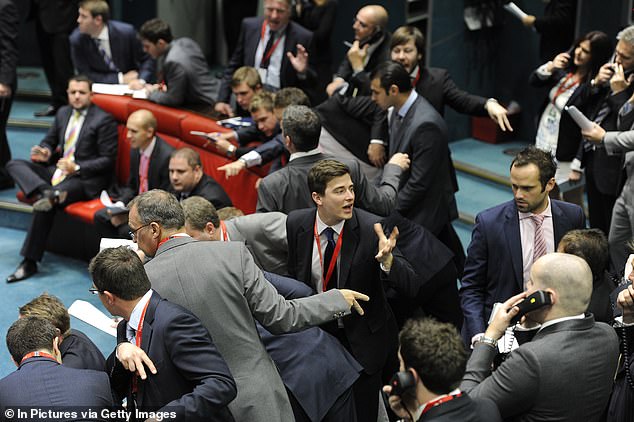 No slovenly behaviour or throwing projectiles and fines for standing: The rules which govern trading in The Ring

Traders must abide by strict rules in the ring. The LME bans chewing while dealing, reading newspapers or magazines in the trading area, ‘slovenly, overzealous and drunken behaviour’ and the throwing of projectiles.

Examples of acts of misconduct include:

Chewing whilst dealing by open-outcry;

The use of foul and abusive language; Reading newspapers or magazines etc. in the Dealing Area;

Sitting down in the Dealing Area (other than when dealing in the Ring or using the seat provided in each member’s booth);

Smoking on Exchange premises at any time;

Excessive noise from behind the Ring whilst dealings are in progress or the Official Prices are being announced.

However metal brokers are likely to resist any changes – with many enjoying the rowdy trading and claiming it is the best way to set LME’s complex system of futures contracts.

Many say it serves the industry as well today as it did in Victorian times, doing £38billion of trades a day.

And the announcement of the plans come as experts predict a global boom for the metal trading industry.

A spokesperson for the LME said: ‘We believe it is the right time to consider the permanent closure of the Ring and a move to an electronic pricing structure

‘This shift is expected to benefit the market by broadening direct participation during the price discovery periods and increasing overall transparency.’

LME chief executive Matthew Chamberlain said: ‘The Ring is a greatly treasured aspect of the LME’s rich 144-year history, and its closure is not a decision we or our market will take lightly.

‘However, the LME has stood the test of time precisely because of its ability to adapt to the evolution of market dynamics and trading behaviour.

‘For the last 10 months, the Ring had to be temporarily closed due to the global COVID-19 pandemic.

‘We have been clear that we will not use the pandemic as a pretext to close the Ring, and we remain committed to this.

‘However, it is fair to observe that this period of electronic pricing has served the market well, with consistently high volumes of activity in the pricing window, easily observable by all stakeholders, and more participants with direct access.

‘Given the data, and our industry’s continued move towards digitisation and greater transparency, we believe it is now time to consider the long-term future of pricing at the LME – with the intention of providing certainty, which will allow all customers to make their future business decisions with confidence.’

City commentator David Buik said: ‘Tragic but with the advent of technology, the LME has done well to hang in there for so long.’ 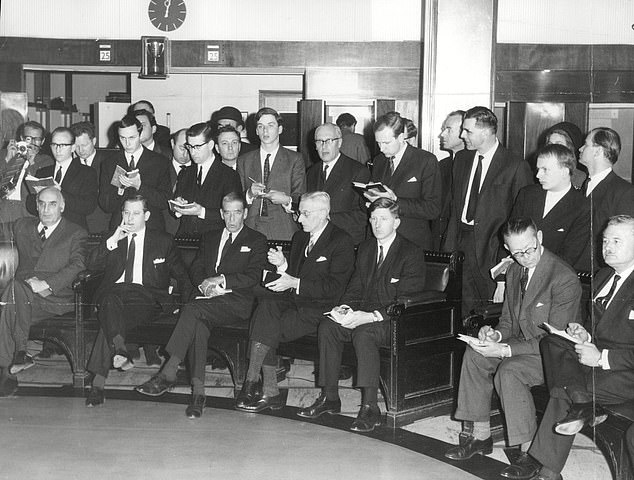 In the trading pit – the Ring – brokers huddle together on circular red sofas to decide the final price. But it has been criticised for being outdated and not female-friendly 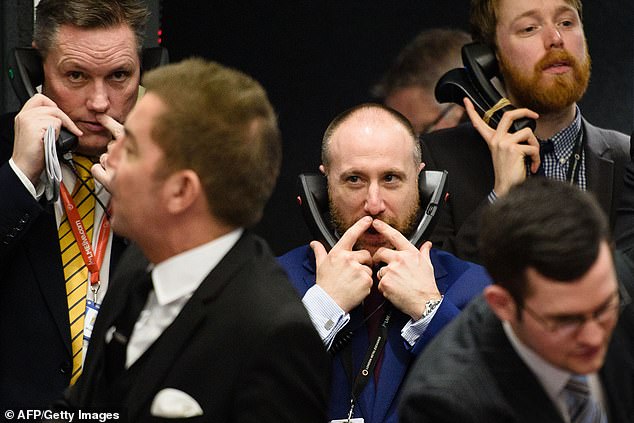 Traders operate in the Ring, the open trading floor of the new London Metal Exchange (LME) in central London on February 18, 2016. The exchange famously has strict rules on dress code and conduct, which includes keeping your top button fastened, your jacket on and hair presentable. Members are also banned from chewing gum 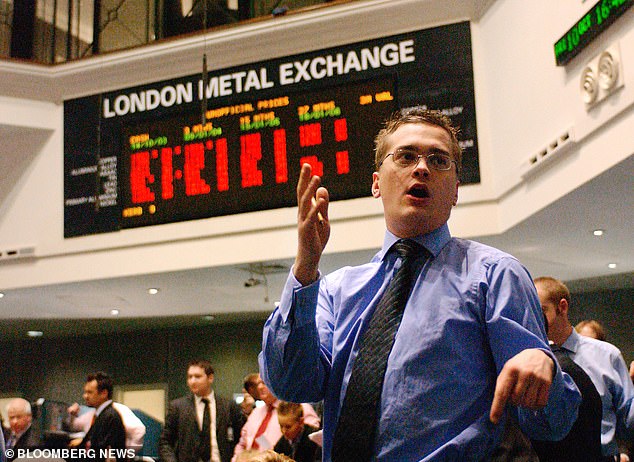 Traders are fined thousands for standing

Traders from nine of the 11 floor-dealing firms, including JPMorgan and Société Générale, were fined more than £1,000 in 2014 after they were caught ‘standing in the Ring’.

The LME said it, ‘operates a ring, not a pit’ and dealers that stand create an unfair advantage and might obstruct the view of other dealers and LME pricing committee members.

Traders must sit on red leather sofas arranged in a 20-foot diameter ring.

In 2011, nine traders had to pay a total of £13,750 and one was suspended for two days because it was his second offence in three months.

The ancient rule against standing was established to ensure that dealers’ line of sight is never obstructed during the five-minute trading sessions.

In the trading pit – the Ring – brokers huddle together on circular red sofas to decide the final price.

But it has been criticised for being outdated and not female-friendly.

Closing the floor instead pits them against sophisticated algorithmic traders and big banks.

City commentator David Buik said: ‘Tragic but with the advent of technology, the LME has done well to hang in there for so long.’

‘We still have serious concerns about how the exchange will continue to operate efficiently during periods of illiquidity and uncertainty.’

The LME is owned by HKEX, the owner of the Hong Kong Stock Exchange, which bought it for £1.4billion in 2012.

The exchange famously has strict rules on dress code and conduct, which includes keeping your top button fastened, your jacket on and hair presentable.

1571: The origins of the London Metal Exchange can only be traced back as far as the opening of the Royal Exchange in London in 1571 during the reign of Queen Elizabeth I.

It was there that traders in metal and a range of other commodities began to meet on a regular basis.

At first the traders merely dealt in physical metal for the domestic market but because Britain soon became a major exporter of metals, European merchants began to arrive to join in these activities. 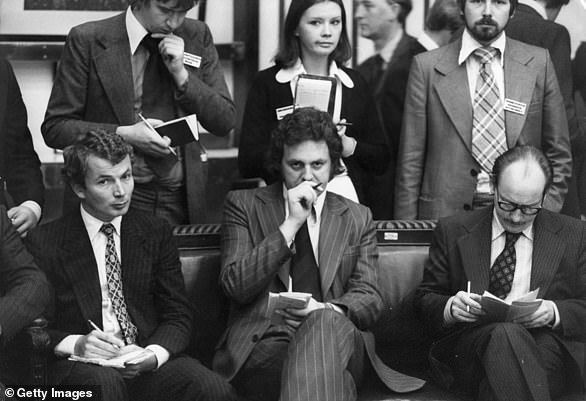 1877: In the early 19th century there were so many commodity traders, ship charterers and financiers using the Royal Exchange that it became impossible to do business.

As a result, individual groups of traders set up shop in the nearby city coffee houses.

The Jerusalem Coffee House, off Cornhill, became the favourite of the metal trading community and it was there that the tradition of the Ring was born.

A merchant with metal to sell would draw a circle in the sawdust on the floor and call out ‘Change’, at which point all those wishing to trade would assemble around the circle and make their bids and offers.

In 1877, The traders formed the London Metals and Mining Company and moved into their first premises over a hat shop in Lombard Court.

After membership exceeded the three hundred mark, the decision was taken to move to a purpose built Exchange in Whittington Avenue, where it remained for 98 years.

1994: After a period of 14 years at Plantation House in Fenchurch Street, the Exchange moved to Leadenhall Street.

2016: The LME moved to its current home in Finsbury Square. 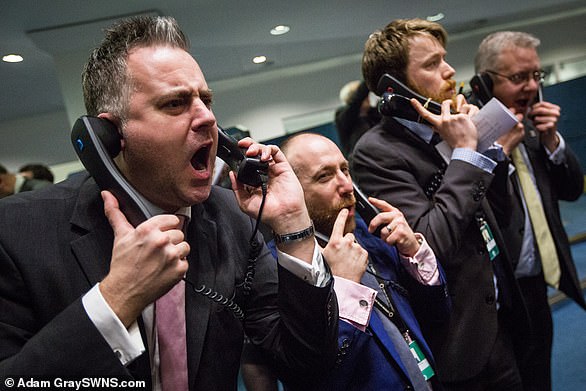 Traders work on the trading floor of the open outcry pit during the last ever session at the London Metal Exchange in 2016, before it moved to Leadenhall Street