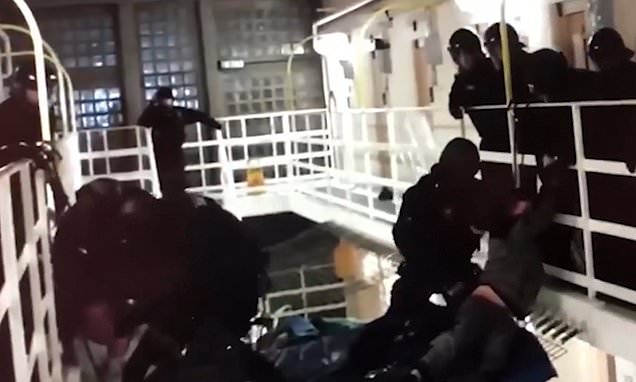 Prison inmates downed illicit alcohol before jumping on to netting designed to stop prisoners falling from the top storeys of cell blocks.

And two of the inmates had ligatures around their neck as they threatened that if they fell and hanged themselves the prison guards were to blame.

As prison officers armed with riot shields tried to get the men back over the railings one of the men wielded a table leg.

They were just inches away from the edge of the netting when officers deployed a Pava (pepper) spray which left them rolling on the netting with their hands to their face.

Desperately trying to find the edge of the net one of the men, who had just seconds before been trying to hit the officers with a table let, reached out towards them for help. 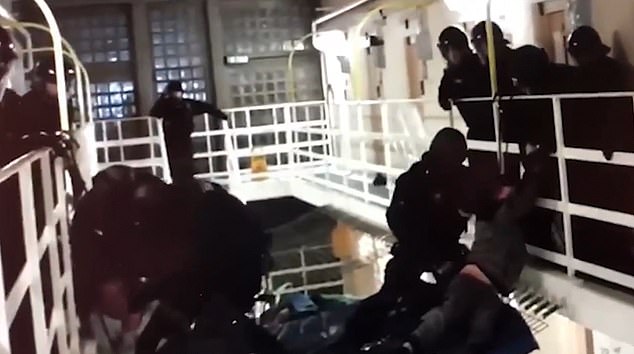 He was immediately pulled back on to the cell landing as officers descended on him to ensure he could not lash out.

But the other two inmates remained on the netting and kicked their legs out towards the edge to stop officers getting to them.

Eventually two prison officers are forced to leap out on to the net and each grab one of the men before wrestling them through the railings.

Hull Crown Court heard last week how it had been part of a three-hour stand-off.

The men had spent the day drinking before they and two other men kicked off. Prison officers in helmets and riot shields rushed to the scene. 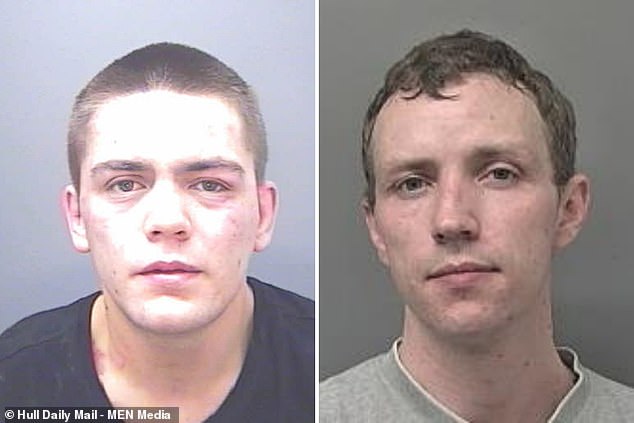 The two other men eventually gave up but Windass, Skelton and Smith continued their violent stand-off, as shown in the video above, and put ligatures around their necks and threatened to jump if officers stepped in.

The violence took place on May 11, 2017, and it is unclear what triggered the stand-off other than the fact the men had been drinking.

Smith, 36, of Hornby Grove, east Hull, was also sentenced for two counts of dealing class A drugs which he committed after being released from prison.

Mike Greenhalgh, prosecuting, said: ‘The men accessed the netting area between the balconies which stops prisoners from falling.

‘They were all described as highly intoxicated after drinking a fermented liquid.

‘They attacked the prison officers who tried to remove them, threatening violence, spitting on them and then striking the officers with handmade weapons, namely table legs. 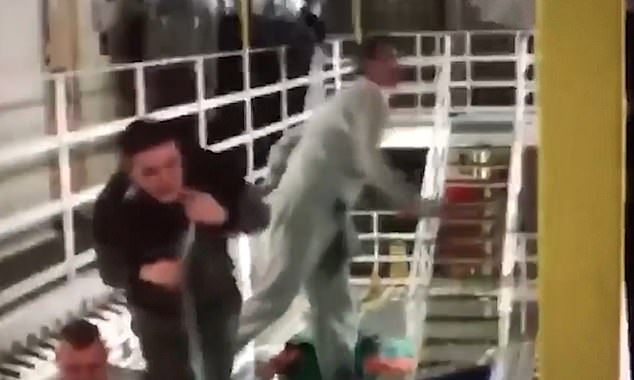 ‘The three men also had ligatures around their necks and said that if they fell and were hanged, the prison officers would be to blame.

‘They remained there for three hours and it only ended when officers deployed a Pava (pepper) spray to incapacitate them.’

In relation to the drug offences committed by Smith, the court heard he was caught by police at an address in Hull on November 29, 2018. 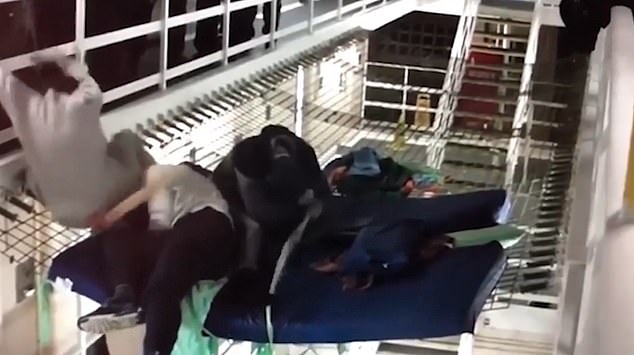 Desperately trying to find the edge of the net one of the men, who had just seconds before been trying to hit the officers with a table let, reaches out towards them for help

Police saw him with some tin foil and a mobile phone. He was searched and kinder eggs were found containing heroin and cocaine. Texts were found on the phone which related to drug dealing.

Ian Phillip, representing Skelton, 28, of Peel Place, west Hull, pointed out that it is two years since the offence was committed and he since served his time and moved on.

He told the court: ‘My client has now found work with an agency and he is keen for that to continue. He met his girlfriend shortly after his released from prison and now they are expecting their first child.’ 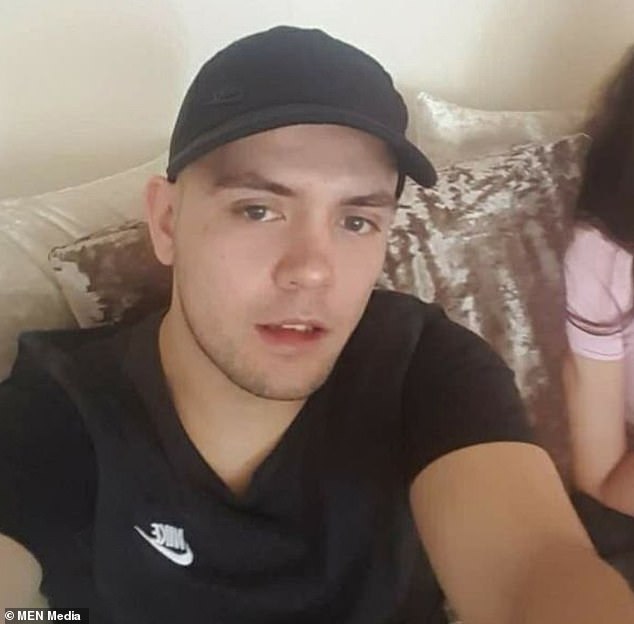 Shaun Smith, 36, of Hornby Grove, east Hull, was also sentenced for two counts of dealing class A drugs which he committed after being released from prison

Dale Brook, for Windass, 32, of Nornabell Street, east Hull, says it is a similar story for his client.

He said: ‘Since my client has been released he has got himself a job and is in a stable, loving relationship.

‘While this sort of behaviour in prison is totally unacceptable, two years have elapsed since and why it has taken so long beggars belief.’

Claire Holmes, for Smith, accepted her client was going to jail due to the drug offences but asked for leniency.

She said: ‘In relation to the drug offences, it was low-level dealing to other users he knew to feed his own habit.

‘This is a genuine turning point for him and he is now clean and wants to sort himself out so he can see his children when he is released.’

Judge Paul Watson admits he was in a quandary regarding sentencing due to the length of time since the affray offences took place.

He said: ‘This is one of the most appalling incidents of prison indiscipline I have seen. Whether you call it affray or violent disorder, it deserves a substantial custodial sentence. 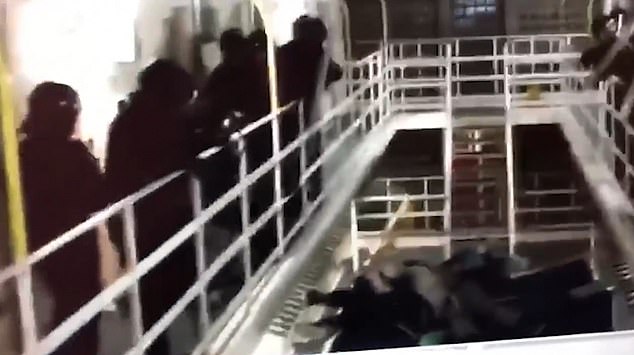 ‘It was absolutely disgraceful conduct and it was dangerous for the prison officers who were just trying to do their job.

‘Trouble like this in prison is something the public are very rightly concerned about.

‘But I find it very difficult because, since both Mr Skelton and Mr Windass were released, they have served their time on licence and have not been recalled.

‘In fact, both men have made significant attempts to turn their lives around and have, to some degree, succeeded.

‘This offence would normally attract a prison sentence of two and a half years but to send you both to prison now after all your efforts would be inhumane.’

Skelton and Windass were given 20-month prison sentences, suspended for 12 months, while Skelton was also told to carry out 180 hours unpaid work after breaching a community order.

Smith was handed three years in jail for the two drug dealing offences and a further 20 months concurrently for the affray.