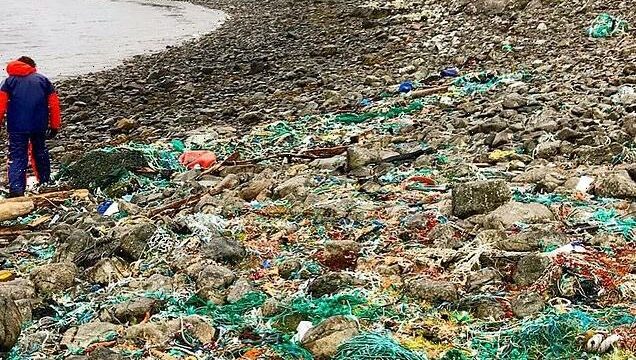 A hundred billion reasons to turn the plastic tide: Survey shows shocking amount we throw away every year as scourge of pollution is laid bare

British households throw away collectively nearly 100billion pieces of plastic every year, according to a survey.

On average each home throws away 66 pieces of plastic a day – with only a small fraction recycled, the survey found.

The Big Plastic Count saw nearly British 100,000 households count every piece of disposable packaging they used over the course of a week in May.

If scaled up, it suggests Britons are chucking out 96.6billion pieces of plastic a year, according to Greenpeace and Everyday Plastic, which launched the project. The most common item was packaging from fruit and veg, followed by snack bags, packets and wrappers.

Around 46 per cent of plastic is incinerated, with 25 per cent dumped in landfill, the survey found. Just 12 per cent will be recycled in the UK, with 17 per cent shipped abroad. The Daily Mail has long highlighted the scourge of such pollution with its Turn the Tide on Plastic campaign.

Greenpeace UK’s Chris Thorne said: ‘This is a jaw-dropping amount of plastic waste… Pretending we can sort this with recycling is just industry greenwash.’

The Department for Environment, Food and Rural Affairs said it is ‘tackling single-use plastics through our landmark Environment Act’.