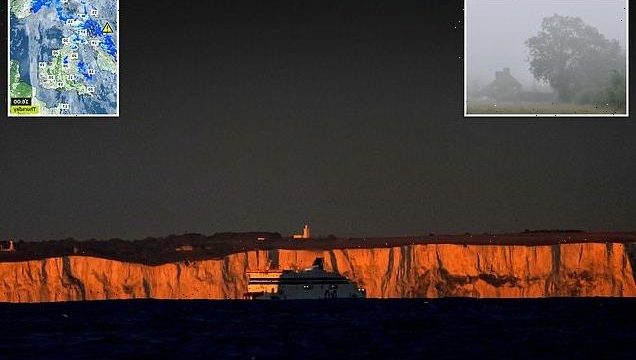 Enjoy it while it lasts! Sub-tropical air will see 70F heat today making UK hotter than Istanbul and Rome with the sun lasting over the weekend… before the mercury falls to more typical 55F by Tuesday

Parts of Britain are set to enjoy 70F (21C) highs from today until the end of the weekend in a welcome reprieve from torrential downpours and flash floods that have blighted this week.

Much of England will enjoy brighter skies and warm weather thanks to sub-tropical air being drawn in from the South West – with the above-average temperatures maintained until at least Sunday.

However the picture is not the same across the whole of the UK – with western Scotland under a weather warning for up to 4in (100m) of rain from today until noon on Saturday, and downpours also expected in Wales.

Temperatures will fall at the start of next week with highs of only 55F (13C) expected on Tuesday and Wednesday. 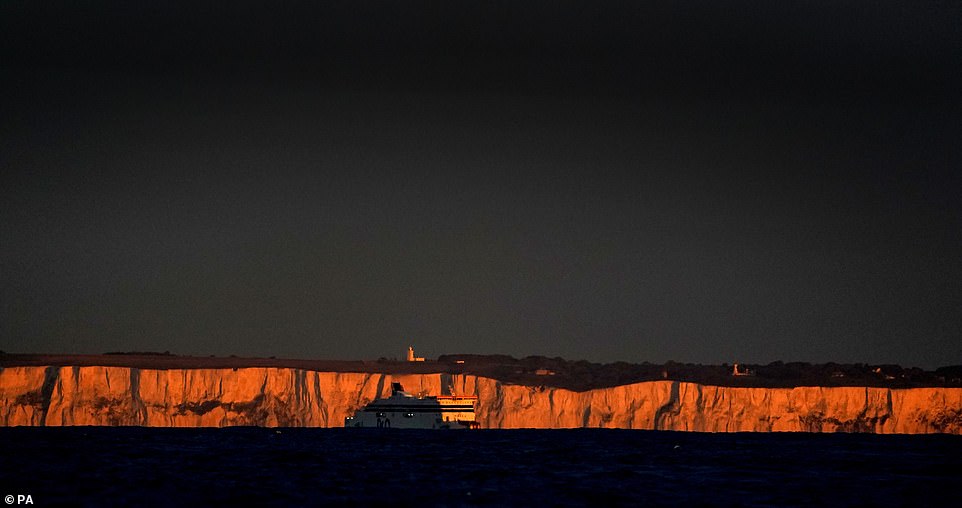 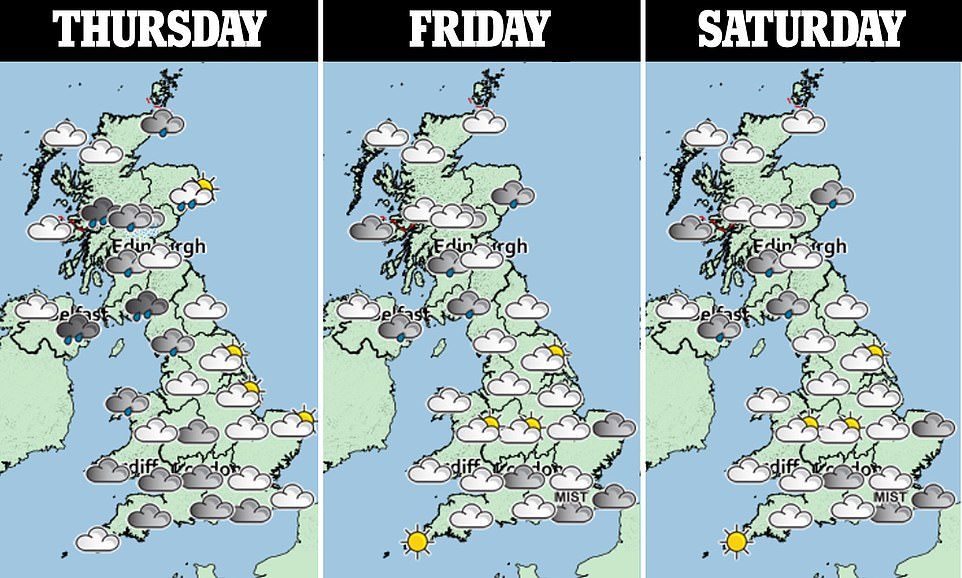 Today, early patches of mist will soon lift and clear in the morning, and it will then be overcast with cloudy skies and outbreaks of rain which will be locally heavy and persistent across Northern Ireland and Scotland.

There will be spots of drizzle and light rain for Wales and western England. Outbreaks of rain will continue across Northern Ireland and Scotland during the evening but further south will be dry. 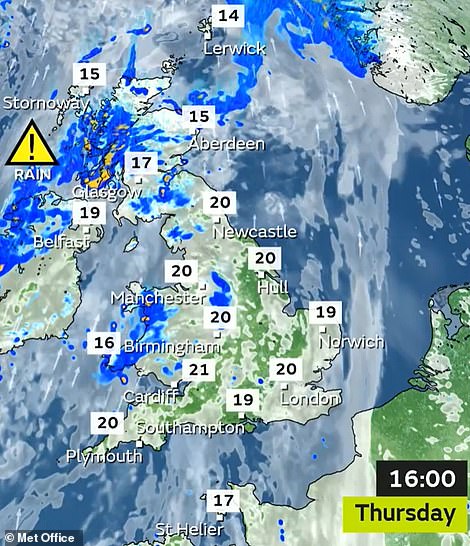 Overnight, England and Wales will be dry with variable amounts of cloud cover – and rain will continue across Scotland and Northern Ireland before spreading into northern England by dawn.

Tomorrow will be mostly cloudy with outbreaks of rain across Scotland and Northern Ireland, while a few brighter spells will develop further south.

Saturday will be another cloudy and wet day across Scotland and Northern Ireland – and cloudy across England and Wales with a few spots of drizzle possible.

Met Office forecaster Aidan McGivern said: ‘Generally a cloudy picture on Thursday morning with a lot of low cloud covering hills in the West and some drizzle continuing in parts of Wales and western England.

‘More persistent wet weather continuing for western Scotland as well as Northern Ireland. Some outbreaks of moderate rain into other parts of Scotland, perhaps some central parts of England and Wales.

‘But generally the wettest conditions for western Scotland. The rain building up – 70mm (3in), perhaps 100mm (4in) over exposed peaks, rain warning in force.

‘The skies brightening across the Midlands, central and southern England, East Anglia – and where that happens, because of warmth coming in from the South West, temperatures reach around 20C, 21C in places – so a mild day, if not warm, where we get that sunshine coming through. 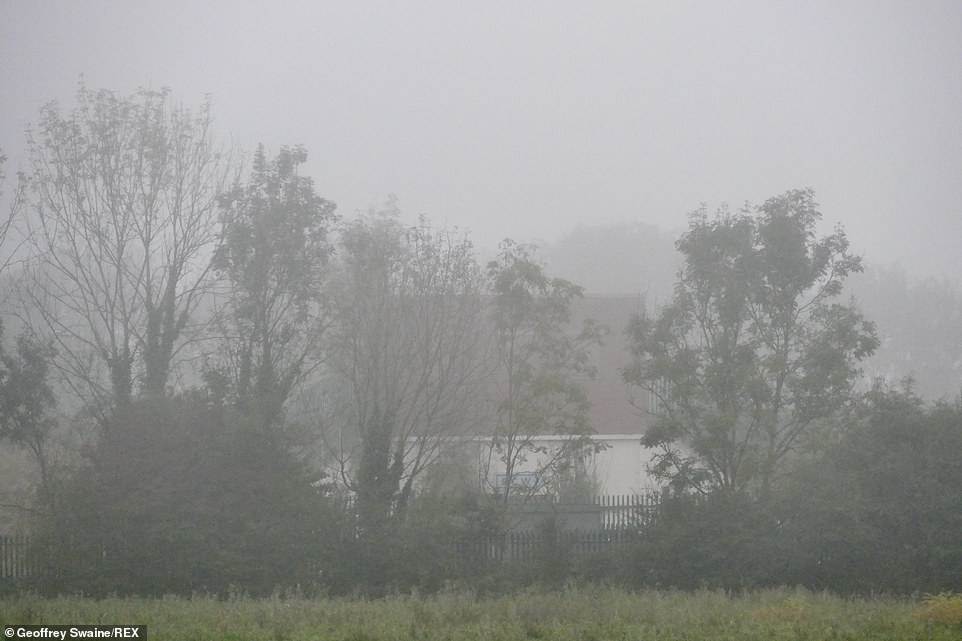 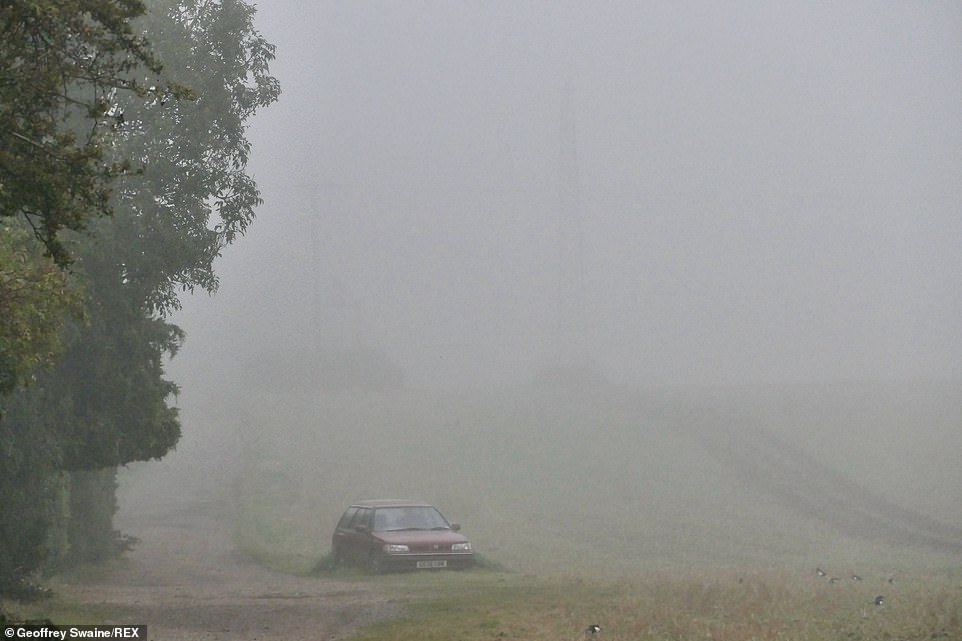 Early patches of mist will soon lift and clear in the morning in places including Dunsden in Oxfordshire, pictured today

‘Into the evening and the rain continues for western Scotland. It’s going to come and go with heavier bursts over the next few days but certainly a lot of wet weather there for parts of the west Highlands and the Western Isles.

‘Some outbreaks as well over northern and western UK. But the further south-east you are, the drier it will be, and another mild night to come on Thursday night heading into Friday.

‘Into the weekend the rain in the North West eventually eases away, but it also turns a bit cooler at the same time.’

It comes after half a month’s rain fell in just a few hours at the start of this week. The bad weather hit London and the South East through the early hours of Tuesday causing flooding, before moving north later in the day.