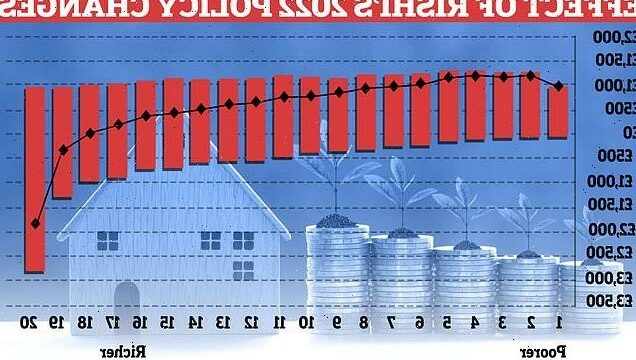 State benefits and pension will see largest increase in 32 YEARS after Rishi Sunak’s £15bn splurge with poorest households £1,000 better off… but rich £2,000 poorer

State benefits and pension will see their largest increase in 32 years after Rishi Sunak’s £15billion splurge, a new analysis has found.

The Chancellor unveiled a fresh cost-of-living bailout on Thursday with every household getting hundreds of pounds off their sky-rocketing bills.

Pensioners who get winter fuel allowance will receive £300 extra, and he confirmed that the triple-lock will be applied to the state pension this year – likely to entail a double-digit increase. 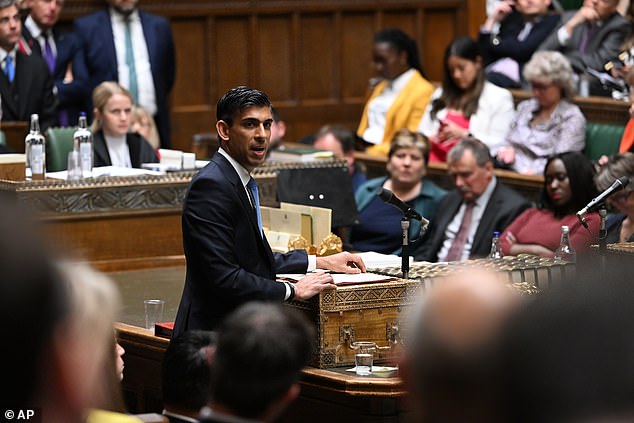 State benefits and pension will see their largest increase in 32 years after Rishi Sunak’s £15billion splurge, a new analysis has found (Pictured: Sunak making a statement in the House of Commons on the cost of living crisis on Thursday)

The Resolution Foundation welcomed the decision to boost benefit and state allowances yesterday, but revealed it will come with a massive price tag.

It said: ‘On current forecasts, this means that most benefits and the state pension are set for an increase of around 9.5 per cent, the largest nominal increase since 1991, and at an expected cost of around £15billion.’

The triple lock – a Tory manifesto commitment – ensures that the state pension will rise each year in line with average wage growth, inflation or by 2.5 per cent – whichever is highest.

The Resolution Foundation analysis showed that that the poorest fifth of households will gain £1,195 on average.

In comparison, the richest fifth of households will lose £456 on average.

A part of the document read: ‘The winter ahead will be a long way from easy for poorer households, but it will be a lot less grim as a result of yesterday’s package.’ 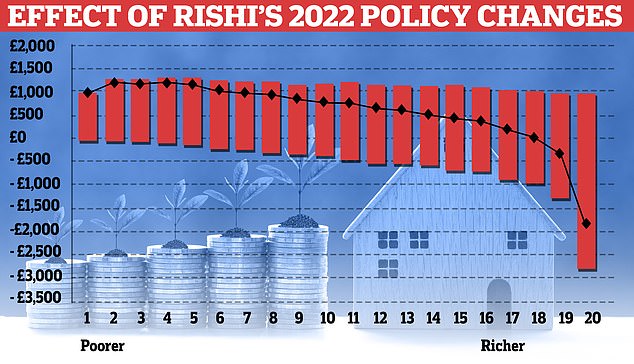 Mr Sunak confirmed that the government is performing an extraordinary U-turn on imposing a 25 per cent windfall tax on the surging profits of oil and gas firms, following weeks of wrangling in Cabinet.

But he attempted to soothe Tory fury that he had caved into Labour demands and offered ‘red meat to socialists’ by saying the levy – which should raise £5billion in the first year – will be ‘temporary’ and there will be big tax breaks for companies that invest.

Rishi insisted he remains a ‘fiscal conservative’ despite not ruling out returning next year with another high-spending emergency package.

Asked if he is prepared to return with another emergency package next year even if it requires more borrowing and taxes, Mr Sunak told BBC Radio 4’s Today programme: ‘People can judge me by how I’ve acted over the last couple of years.

‘I’ve always been prepared to respond to the situation on the ground, what’s happening to the economy, what families are experiencing and making sure we’ve got policies in place to support them through that.

‘In terms of “is it one-off?”, what’s happening next year, I’d go back to what I said earlier.

‘I do want people to be reassured and confident that we will get through this. We will be able to combat and reduce inflation, we have the tools at our disposal and after time it will come down.’ 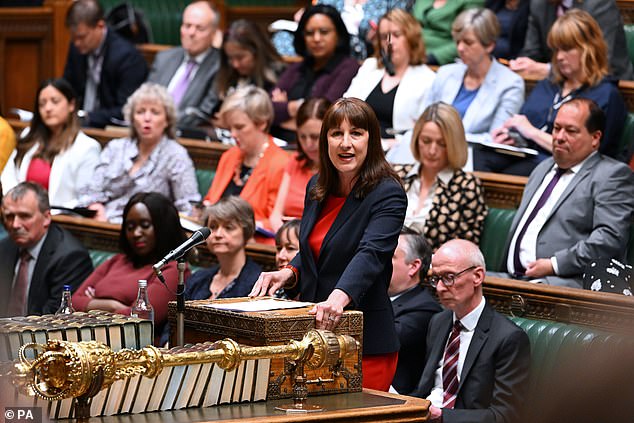 Shadow chancellor Rachel Reeves (above) goaded Mr Sunak over his volte face on the windfall tax, saying he was desperate for a ‘new headline’ after Partygate 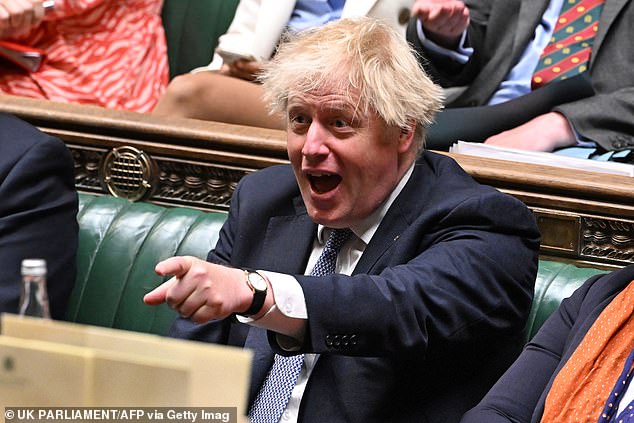 The Chancellor unveiled a fresh cost-of-living bailout on Thursday with every household getting hundreds of pounds off their sky-rocketing bills (Pictured: Prime Minister Boris Johnson reacts to opposition)

He added: ‘First and foremost I’m a fiscal conservative, I believe it’s incredibly important that I manage the country’s finances responsibly.

‘That means after suffering the shock we did to get our borrowing and debt levels back on a sustainable trajectory.’

The £200 per household state loan for energy bills – which was due to take effect in October and be paid back over the next four years – is being converted to a permanent grant and doubled to £400 to take the edge off the misery of spiking inflation for 27million homes.

Officials have confirmed that owners of second homes will benefit for each property.

Mr Sunak is expected to receive the benefit as he has multiple properties, although he does not directly pay utility bills at his grace-and-favour residences.

It is understood the Chancellor will donate any saving he makes to good causes in his constituency.

Mr Sunak said eight million households on benefits will also get a £650 handout, paid in two stages in July and autumn – which will cost the Treasury £5billion.

It means that most of those families could be due a total of £1,200 over the coming months, including the previously-announced £150 council tax rebate for band A-D properties. 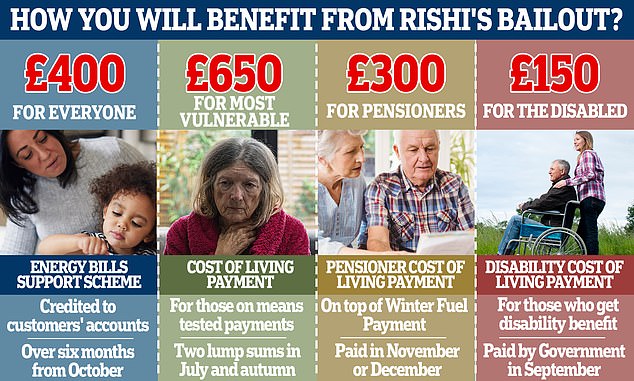 How will Rishi’s cost-of-living measures work?

The government is funding energy firms to cut bills by £400 for every household this year.

The reduction will be automatically applied to bills from October.

Previously a £200 discount was due to be added back to bills over the next five years – but it will now not need to be repaid.

PAYMENTS TO BENEFITS CLAIMANTS AND PENSIONERS

The government will pay £650 payments directly into benefits claimants’ bank accounts in July and the Autumn.

Pensioners will receive £300 automatically alongside Winter Fuel Payments in November and December.

The £150 will be paid to individuals in receipt of extra cost disability benefits by September.

Households in England in council tax bands A-D received a £150 rebate from April.

It is being applied directly by local authorities, and need not be repaid.

The government says 80 per cent of all homes in England will benefit.