It started with vomiting, and it had doctors baffled. Oli Kenny, a bright six-year-old prep student, had been sick on and off for weeks. A GP recommended Oli’s parents cut dairy from his diet, then prescribed antibiotics for an ear infection.

The vomiting continued, and got worse. Eventually Oli’s mother Merita took him to hospital for assessment. Even there, doctors could initially find nothing wrong with him. 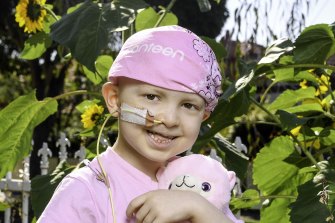 “I actually had one of the doctors in there saying, ’well at least we know it’s not a brain tumour or anything because his co-ordination is so good,” Merita recalled. “And I was like, ‘well I didn’t even think of a brain tumour’.”

For two months Oli’s parents shunted him between GPs and hospital, trying to find answers. Finally, on October 4, with Merita refusing to leave the Royal Children’s Hospital, a specialist examined Oli’s eyes.

And then he turned around and looked at me and he said, ‘You’re going to the ward tonight’,” Merita said. “‘You’re not going home. There’s swelling on the brain’.”

Oli was rushed in for surgery two days later to remove a 32mm tumour, which had produced two small pea-like tumours on his spine.

Three days later, on his father Kirk’s 50th birthday, the family found out Oli – a one in a million kid – had medulloblastoma.

Medulloblastoma is a fast-growing and aggressive cancer, with which about 25 children are diagnosed in Australia each year. Doctors who performed the surgery on Oli told his parents that without diagnosis and medical intervention, he could have had as little as two weeks left to live.

The Kennys were plunged into every family’s worst nightmare, made more difficult by Melbourne’s tough lockdown. Merita had to step back from her part-time job at an aged care provider to care for Oli full-time. Kirk kept working but took frequent absences to look after Oli and his eight-year-old brother Ethan.

After surgery, Oli underwent 30 rounds of radiation therapy; having to be put under general anaesthetic each time. In January, he began chemotherapy. He’s undergone lumbar punches, blood and platelet transfusions, fevers and rounds of antibiotics after each transfusion. There are five more months of treatment to go.

And there is the unexpected cost of chronic illness. The family had to renovate, changing a drafty, small spare room into a room for Oli. This meant it had to be carpeted, heated and insulated. Then there are the IV poles, the wheelchair and hospital-grade bed for home, the lost income and games bought as a reward for the gruelling treatments. 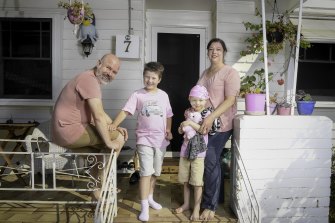 Through it all, say Merita and Kirk, their community and Ethan’s courage have kept them going.

When Oli had recovered from the surgery and was being released home, the family’s friends and neighbours decorated their home with pink ribbons and balloons in honour of Oli’s favourite colour.

A stranger gave them a television for Oli’s room. Pascoe Vale North Primary School, where the boys attend, held a Pink for Oli day – children and teachers dressing in pink and donating a gold coin to the Royal Children’s Hospital’s oncology ward.

Once Merita went to the supermarket in the middle of a particularly hard day and found herself tearfully telling the checkout assistant all about Oli’s radiation therapy and treatments. As Merita packed her bags, the woman paid for her shopping, more than $100’s worth.

“She came back and bawled her eyes out,” Kirk says.

“It’s been wonderful, the support. Like they say, you find out who your friends are when the chips are down and we found out we’ve got lots of friends, but much, much better friends than we even knew.”

Merita and Kirk want two things from telling their story: to encourage people to donate blood – there is a particular need for platelets – and to bring more awareness of the vague symptoms of medulloblastoma. They include dizziness and clumsiness, headaches, nausea and vomiting, tiredness and changes in thinking.

And for Merita, there is another: to encourage parents to keep seeking another opinion if they believe they’re not being taken seriously.

“Don’t take no for an answer,” Merita says. “If you’re not confident to take your child home, you let them know. Stand strong, because you know what’s going on at home.”