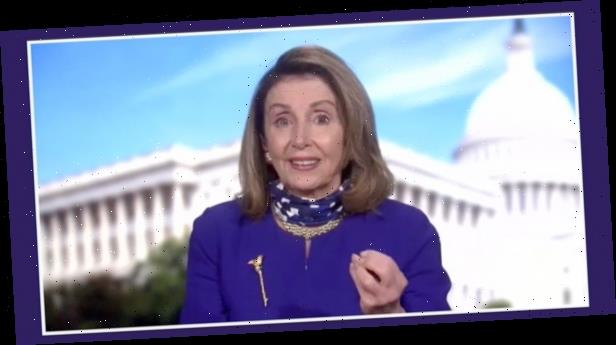 House Speaker Nancy Pelosi on Monday called a report that President Donald Trump has more than $300 million in loans coming due within the next few years a “national security issue” and argued it raises questions about whether foreign nations or individuals could have “leverage” over the president.

Trump has refused to disclose his tax documents, but The New York Times’ reported on Sunday that that documents seen by the newspaper show he is personally responsible for repaying the loans.

In an interview with NBC News’ Andrea Mitchell, Pelosi, a Democrat, expressed concern about the impact that might have had on policy and on relations with different nations, including Russia.

“This president appears to have over $400 million dollars in debt. To whom? Different countries? What is the leverage they have? So for me, this is a national security question,” Pelosi said.

“We take an oath to protect and defend. This president is commander in chief. He has exposure to the tune of hundreds of millions of dollars, to whom? The public has a right to know,” she continued.

The New York Times obtained two decades of President Donald Trump’s tax information, reporting Sunday that the president paid only $750 in federal income taxes the year he won the presidency and again during his first year in office.

The Times reported that Trump has not paid any income taxes in 10 of the past 15 years, mostly because he reported significant losses, and that Trump is facing a decades long Internal Revenue Service audit over a $72.9 million tax refund he received that could end up costing him more than $100 million.

The Times also reported that Trump has more than $300 million in loans coming due within the next few years that he is personally responsible for repaying.

The tax documents cover more than two decades, including some of his time as president, but they do not include his returns from 2018 and 2019. NBC News has not seen or verified any of the documents reported by The Times.

Trump dismissed the report as “fake” and his company said that the president had paid millions in “personal” taxes. Neither Trump nor his company would provide different tax payment totals to contradict The Times reporting.

Without providing any evidence, Pelosi pointed specifically to Russia as a country she felt could be involved. She cited numerous policy and messaging items the Trump administration has pushed over the last several years that have been favorable to Russia.

“The question is what does Putin have on the president politically, personally, financially in every way that the president would try to undermine our commitment to NATO, give away the store to Russia and Syria, try to cast blame on Ukraine for interfering in our elections when he knows full well with the consensus from the intelligence community that it is Russia. The list goes on and on. The annexation in the Crimea, and the rest of that that the president just turns away from,” Pelosi said. “So, he says he likes Putin and Putin likes him. Well, what’s the connection? We’ll see.”

“But the fact is whatever that leads to, the fact is over $400 million in leverage that somebody has over the president of the United States,” she added.

Pelosi also addressed a letter she wrote to her fellow House Democrats, urging them to flip House state delegations to Democratic majorities in preparation for the possibility that the 2020 election could be decided, per the U.S. Constitution, by those delegations.

”I’ve been working on almost every scheme he might have to steal the election,” Pelosi said. “Anything we do to increase our number in the House of state delegations or members of Congress, wherever they are, will help us hold the House, enlarge our size, win the Senate and elect Joe Biden President of the United States on election day, or the few days that it takes to count thereafter.”