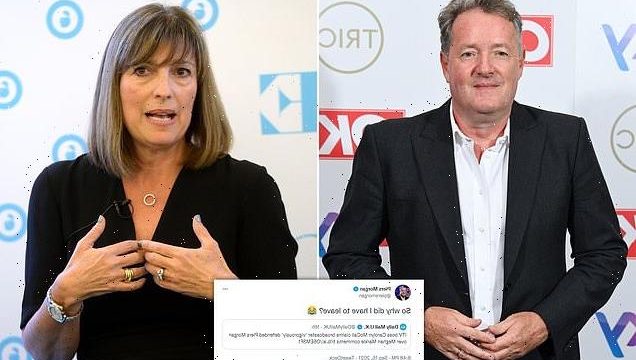 ‘So why did I have to leave?’ Piers Morgan hits back at ITV boss Carolyn McCall after she claimed broadcaster ‘vigorously’ defended him over Meghan Markle comments and were ‘championing free speech’

Piers Morgan has hit back at head of ITV Dame Carolyn McCall after she claimed the broadcaster ‘vigorously’ defended him over his comments about Meghan Markle earlier this year.

The 56-year-old presenter shared an article on Twitter reporting on his former boss’s comments last night, asking her: ‘So why did I have to leave?’, next to a laughing emoji.

Dame McCall had told the Royal Television Society Cambridge Convention: ‘I will just say that we vigorously defended both the programme and Piers to Ofcom, and the reason we didn’t get pulled up by them is because of the programme making.’

She added there is ‘no way we wouldn’t be absolutely, not just endorsing, but championing freedom of speech and freedom of expression’.

She said she expects to see Mr Morgan ‘working on some global platform any day soon.’

Mr Morgan left Good Morning Britain (GMB) in March after refusing to apologise for saying he ‘didn’t believe a word’ of what Ms Markle had claimed in her bombshell interview with Oprah.

The episode became the most complained about moment in Ofcom’s history – however the TV watchdog cleared him of any wrongdoing earlier this month. 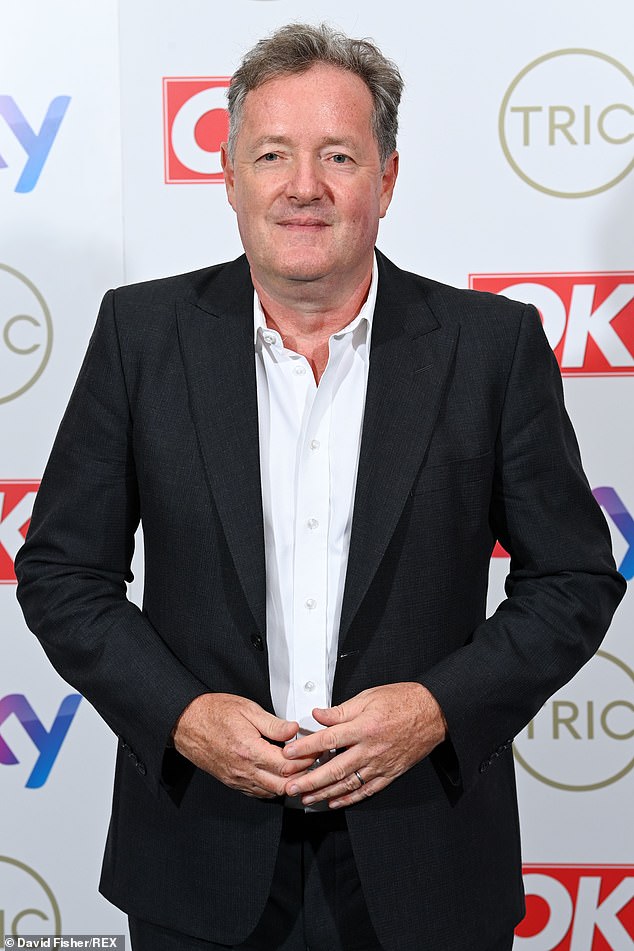 Piers Morgan, 56, asked ITV boss Dame Carolyn McCall: ‘So why did I have to leave?’ after she claimed she ‘vigorously’ defended him 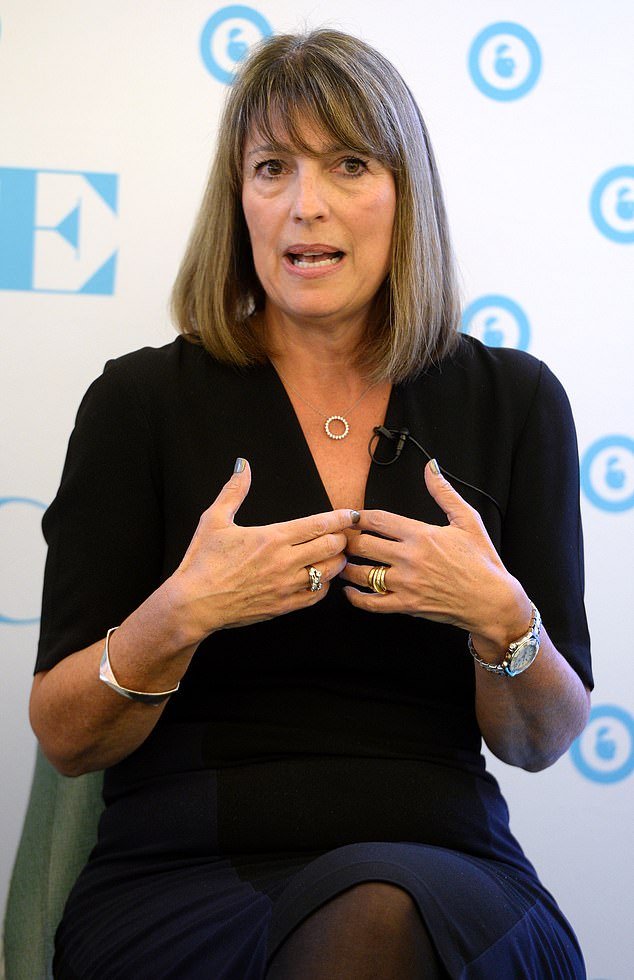 Dame McCall (pictured) had told the Royal Television Society Cambridge Convention: ‘I will just say that we vigorously defended both the programme and Piers to Ofcom, and the reason we didn’t get pulled up by them is because of the programme making.’

Mr Morgan shared an article on Twitter reporting on his former boss’s comments last night, asking her: ‘So why did I have to leave?’, next to a laughing emoji

Mr Morgan was effectively forced out when he refused to offer an apology – later saying in an Instagram post that he had become the latest ‘victim’ of ‘cancel culture’ while warning that freedom of speech was the ‘most important’ issue in modern Britain.

Mr Morgan had said he ‘didn’t believe a word’ of Ms Markle’s claims, including that she had been left feeling ‘suicidal’ after being mistreated by the Royals and that her baby Archie had faced racism.

The presenter clashed with GMB’s weatherman Alex Beresford, who accused him of unfairly ‘trashing’ the Duchess of Sussex, and branded him ‘diabolical’, prompting Mr Morgan to walk off set.

He was then contacted by a senior ITV executive who asked him to apologise for questioning the Ms Markle’s account of her mental health, but he refused and quit instead.

The comments prompted tens of thousands of complaints to Ofcom, but the broadcast regulator defended Mr Morgan’s right to free speech when it cleared him of any wrongdoing earlier this month.

He was left furious on Wednesday when his former show interviewed jihadi bride Shamima Begum, who donned typically western-style clothing as she appealed to prime minister Boris Johnson to be brought home – before brazenly telling him he ‘doesn’t know what he’s doing’ in regards to his fight against terrorism.

Mr Morgan said Begum had been given a chance ‘to exercise her right to free speech’ – when he claims he wasn’t allowed to do the same in relation to Ms Markle.

‘Interesting times we live in when an ISIS terror bride is allowed to exercise her right to freedom of speech on GMB but I wasn’t…’ he tweeted.

The journalist also branded Begum a ‘self-serving monster’ who should be ‘left to rot’ in Syria.

He said: ‘Just as well I’m not interviewing this lying, snivelling, cold-hearted, self-serving ISIS bride monster or I’d have seriously lost my temper by now.

‘Begum should never be allowed back to Britain. Let her rot in the terror bed she made for herself.’ 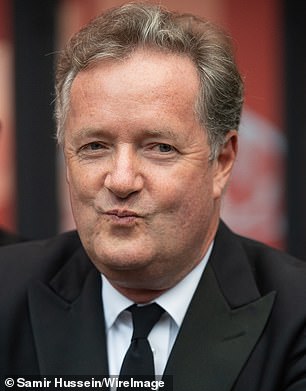 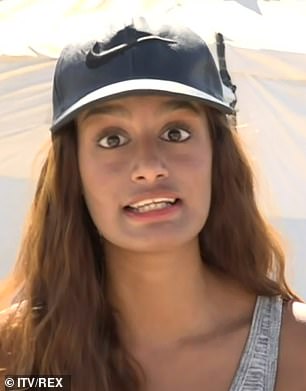 Mr Morgan (left) also slammed the jihadi bride – who wants to be allowed back into the UK – calling her a ‘self-serving monster’ who should be ‘left to rot’ in Syria. She is seen on GMB today

Mr Morgan, 56, left GMB earlier this year after refusing to apologise for saying he ‘didn’t believe a word’ of what Meghan Markle had claimed in her interview with Oprah 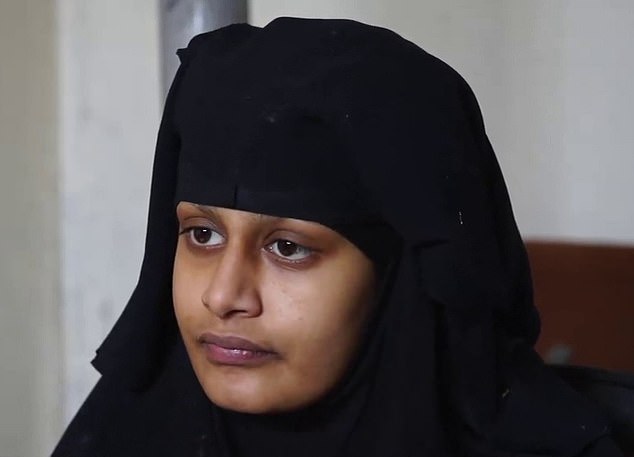 Ms Begum no longer wears her niqab, now straightens her hair, paints her nails, with associates saying she now enjoys Zumba, listening to Shakira and watching Good Morning Britain, which she appeared on today

Sajid Javid (right today) hit back at Shamima Begum’s claims that she played no part in Islamic State terrorism.

Begum claims she was just a housewife in Raqqa trying to live a ‘pure Islamic life’.

But security services reportedly have evidence she was active in ISIS’ reign of terror, carried a Kalashnikov rifle, and became an ‘enforcer’ in the terror group’s ‘morality police’ who enforced sharia law and ensured women were wearing the right clothes and covering their bodies.

Sources claimed Ms Begum had been witnessed preparing suicide vests for would-be bombers, sewing them into them.

Mr Javid refused to comment on the claims – but hinted he believes she is lying.

Referring to his decision while home secretary to strip Begum of her British citizenship, the Health Secretary said: ‘I won’t go into details of the case, but what I will say is that you certainly haven’t seen what I saw.’

He added: ‘If you did know what I knew, because you are sensible, responsible people, you would have made exactly the same decision – of that I have no doubt.’

In the interview that attracted his ire Wednesday, Shamima Begum donned western clothing as she called herself a victim and begged Britain for forgiveness in a tone deaf interview from a Syrian refugee camp.

She also denied being a terrorist or a criminal and insisted she had no idea ISIS was a ‘death cult’ when she joined.

The 22-year-old is banned from the UK after marrying a jihadi with spy agencies denying her claims she was just a Raqqa housewife and instead believe she was a member of the terror group’s feared ‘morality police’ and was even seen stitching suicide bombers into explosive vests and carrying a Kalashnikov.

But wearing a Nike baseball cap and a low-cut vest top instead of a niqab, Begum said she is a victim of grooming by extremists, would now ‘rather die’ than rejoin ISIS and admitted she was wrong to say the Manchester Arena attack was ‘justified’ because of airstrikes that have killed civilians in Syria.

She told Good Morning Britain: ‘No one can hate me more than I hate myself for what I’ve done and all I can say is I’m sorry and just give me a second chance’, but she added she was ‘groomed and taken advantage of and manipulated into’ travelling to Syria.

Denying she is a criminal, she said: ‘The only crime I think I committed was being dumb enough to come to ISIS’.

But Health Secretary Sajid Javid, who revoked her British citizenship in 2019 on national security grounds when he was Home Secretary, hinted that Begum was lying about just being a ‘mother and wife’ when in Syria.

He said: ‘I won’t go into details of the case, but what I will say is that you certainly haven’t seen what I saw.’ He added: ‘If you did know what I knew, because you are sensible, responsible people, you would have made exactly the same decision – of that I have no doubt.’

The east London schoolgirl who dumped her veil a year ago and now straightens her dyed hair, paints her nails and wears make-up, fled her home in 2015 to join the so-called Islamic State terror group in Syria with two friends both now believed to be dead. She denies her image change is a publicity stunt.

Begum also made a jaw-dropping offer to the Prime Minister Boris Johnson, who wants her kept out of Britain, she said: ‘You are clearly struggling with extremism and terrorism in your country.

‘I could very much help you with that because you clearly don’t know what you’re doing’.

She added: ‘I want them (the British public) to see me as an asset rather than a threat to them.’

She has begged to be brought back to the UK to face a terror trial. Asked why she won’t go to Bangladesh, she said: ‘How can a country like the UK, who does not believe in the death penalty, how can they expect me to go to a country where I will be killed?’