Washington: In Alabama, where the nation’s lowest vaccination rate has helped push the state closer to a record number of hospitalisations, a doctor has sent a clear message to his patients: Don’t come in for medical treatment if you are unvaccinated.

Jason Valentine, a doctor at Diagnostic and Medical Clinic Infirmary Health in Mobile, Alabama, posted a photo on Facebook last week of him pointing to a sign taped to a door informing patients of his new policy coming October 1. 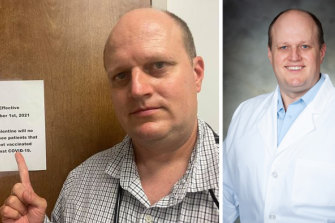 “Dr Valentine will no longer see patients that are not vaccinated against COVID-19,” the sign reads.

Valentine wrote in the post, which has since been made private but captured in online images, that there were “no conspiracy theories, no excuses” stopping anyone from being vaccinated, AL.com reported. The doctor, who said at least three unvaccinated patients have asked him where they could get a vaccine since he posted the photo, has remained resolute to those who have questioned his decision in recent days.

“If they asked why, I told them COVID is a miserable way to die and I can’t watch them die like that,” wrote Valentine, who has specialised in family medicine with Diagnostic and Medical Clinic since 2008.

The Alabama doctor’s stance highlights the state’s challenges in getting residents inoculated at a time when another wave of the pandemic has been fuelled by the highly transmissible delta variant and the millions of people who remain unvaccinated. Alabama has the lowest vaccination rate in the United States, with less than 36 per cent of the population fully vaccinated, and Republican Governor Kay Ivey recently said that “it’s time to start blaming the unvaccinated folks” for the state’s surge in new cases and hospitalisations.

Valentine did not immediately return a request for comment. An employee with the Mobile clinic where Valentine works told The Washington Post that they had no comment. Ashley Rains, a spokesperson with Infirmary Health, which oversees Diagnostic and Medical Clinic, said she did not anticipate Valentine or the hospital system to have a statement on the matter.

All but one county in the state have been deemed by the Centres for Disease Control and Prevention as areas of high community transmission. There are more than 2900 people in Alabama hospitalised because of COVID-19, the fifth-highest state total in the country. The number of hospitalisations is approaching the record set in the state on January 11, according to the Alabama Department of Public Health, when the vaccine was not widely available.

The dire situation has strained the state’s hospital system to the point that there are more patients in intensive care units than there are available ICU beds, according to the Alabama Hospital Association. Don Williamson, the association’s president, told WSFA that there were 1568 patients who needed ICU beds on Tuesday but only 1557 ICU beds for the entire state. About half of the people in ICU beds are COVID-19 patients, he told WBRC, adding that patients were still able to get ICU-level treatment in parts of the hospital not equipped for such care.

Williamson did, however, note whether the ICU situation would look different if more people were vaccinated.

“Only 12 per cent of the patients who are in the hospital today are fully vaccinated,” he told the station. “This could have been prevented had we gotten vaccination numbers to higher levels.”

Hesitancy has led to regret in pockets of the state. A woman in Alabama, Christy Carpenter, whose 28-year-old son, Curt, died of COVID-19 two months after he was diagnosed, told The Post last month how “it took watching my son die and me suffering the effects of COVID for us to realise we need the vaccine”.

Valentine expressed his frustration on Facebook over similar cases of those who’ve hesitated or outright rejected getting vaccinated.

“We do not yet have any great treatments for severe disease, but we do have great prevention with vaccines. Unfortunately, many have declined to take the vaccine, and some end up severely ill or dead,” he wrote. “I cannot and will not force anyone to take the vaccine, but I also cannot continue to watch my patients suffer and die from an eminently preventable disease.”

After he announced he would not see unvaccinated patients starting October 1, the doctor said he required that people show documentation of their vaccination for them to keep him as their physician.

“If you wish to choose another physician, we will be happy to transfer your records,” Valentine wrote.

Since his post went viral, critics and supporters, many of whom are from outside Mobile, have submitted Google reviews in the last 24 hours based on whether they agree with the doctor’s decision. The one-star reviews accused Valentine of being a “bully” who “doesn’t believe in his oath to care for all.” The five-star reviews were much kinder to Valentine for giving his patients a vaccine ultimatum.

“I don’t ever plan on going to Alabama,” one supporter wrote, “[but] if I do I’ll be sure to schedule an appointment with Dr Valentine.”

Meanwhile, a conservative talk radio host from Tennessee who had been a vaccine sceptic until he was hospitalised from COVID-19 has died. He was 61.

Valentine had been a sceptic of coronavirus vaccines. But after he tested positive for COVID-19, and prior to his hospitalisation, he told his listeners to consider, “If I get this COVID thing, do I have a chance of dying from it?” If so, he advised them to get vaccinated. He said he chose not to get vaccinated because he thought he probably wouldn’t die.

After Valentine was moved into a critical care unit, Mark Valentine said his brother regretted that “he wasn’t a more vocal advocate of the vaccination”.

“He regrets not being more adamant about getting the vaccine. Look at the dadgum data,” Mark Valentine said.

Phil Valentine had been a radio personality since he was 20 and became a popular conservative host by railing against a state income tax proposed by Republican then-Governor Don Sundquist, The Tennessean reported.

The program grew into a nationally syndicated show that aired for 12 years on as many as 100 stations, according to the newspaper. At the end of the run, Valentine signed a three-year deal in 2019 that kept him on 99.7 WTN.

“Phil Valentine was a visionary for the conservative movement, and he made an enormous impact on the lives of many Tennesseans,” US Senator Marsha Blackburn tweeted. “My deepest condolences and prayers are with Phil’s wife, Susan, and his family. May they be comforted and surrounded by love during this difficult time.”