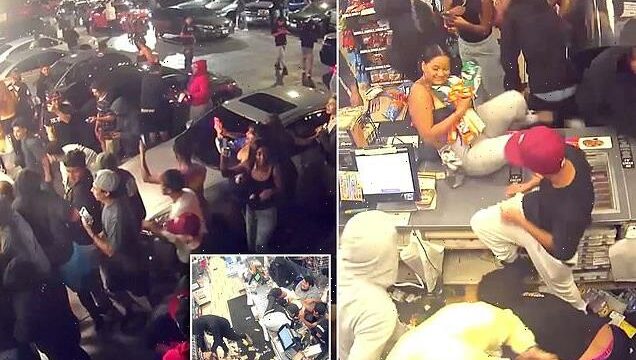 A giant mob descended upon a 7-Eleven following a street takeover at an intersection earlier this week – throwing items over the counter and looting the convenience store.

The gang of people ransacked the store while shouting, completely destroying the COVID-19 safety screen that had been set up to grab as much as they could in Los Angeles, California.

A group entered the convenience store near Figueroa Street and El Segundo Boulevard, with surveillance footage showing the looters shouting at each other, on August 15.

They can be seen running across the store and grabbing drinks, cigarettes, lottery tickets, bags of chips and other items.

According to the Los Angeles Police Department the suspects also started throwing items at them, with around 100 people involved in the chaos.

One store employee was left fearing for his life after the incident, with a suspect wearing a Colorado Rockies hate throwing food at one employee. 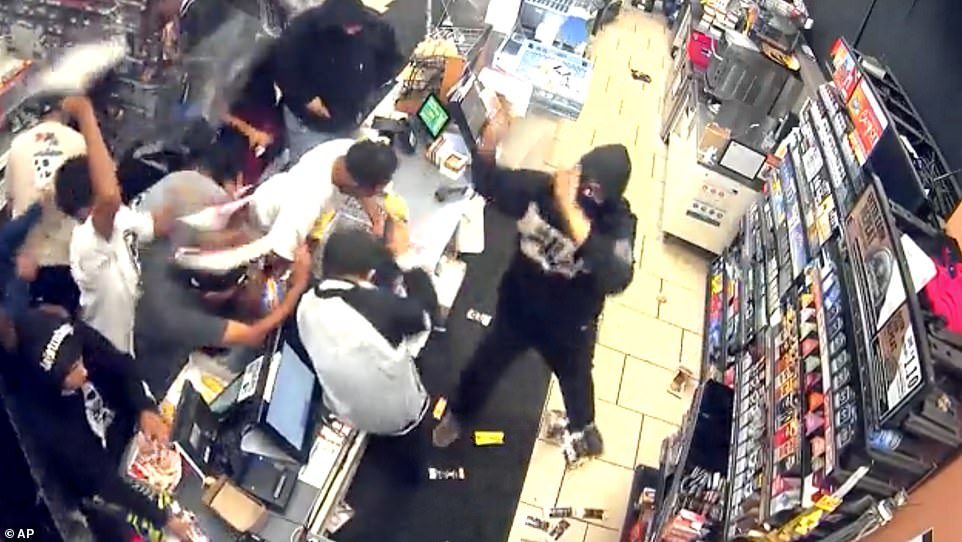 A staff member cowered behind the till as more than 100 people descended on the store, with one man throwing what appeared to be cigarettes to others 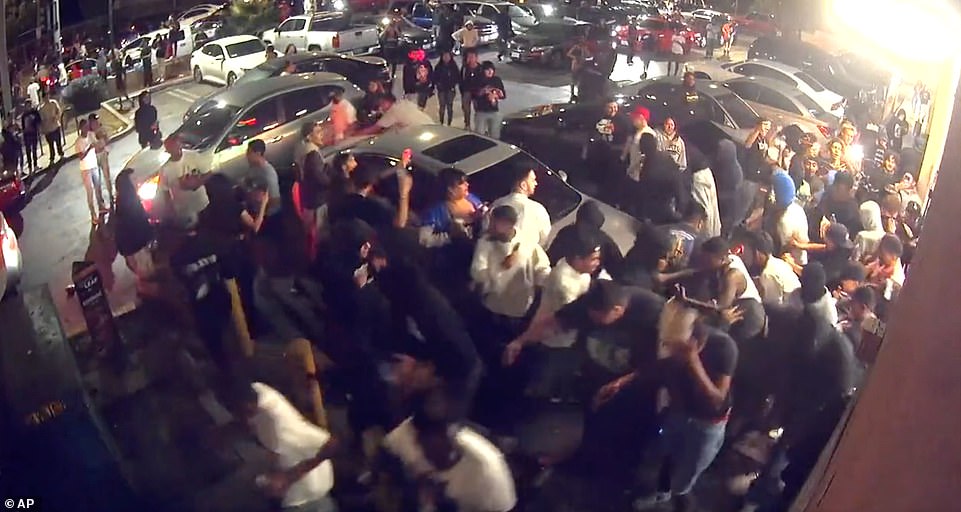 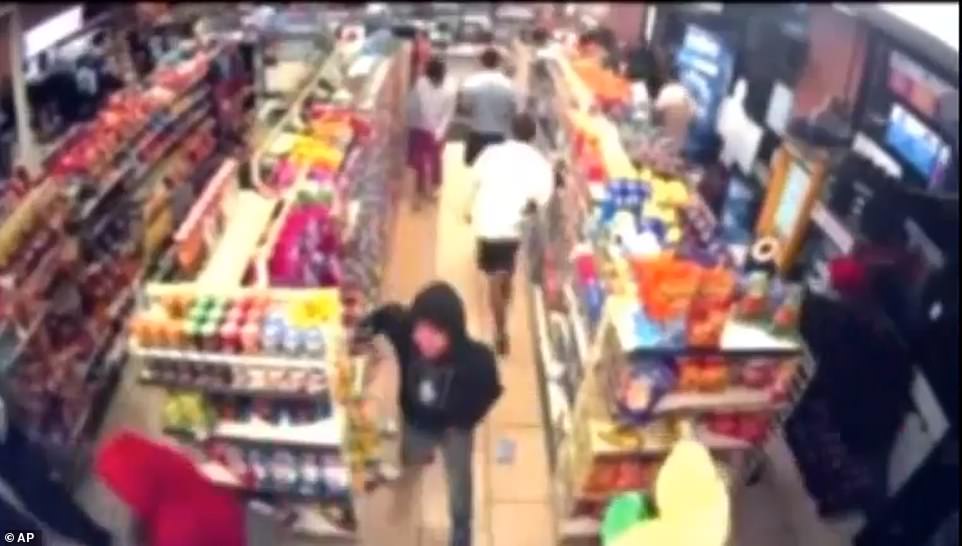 They can be seen running across the store and grabbing drinks, cigarettes, lottery tickets, bags of chips and other items 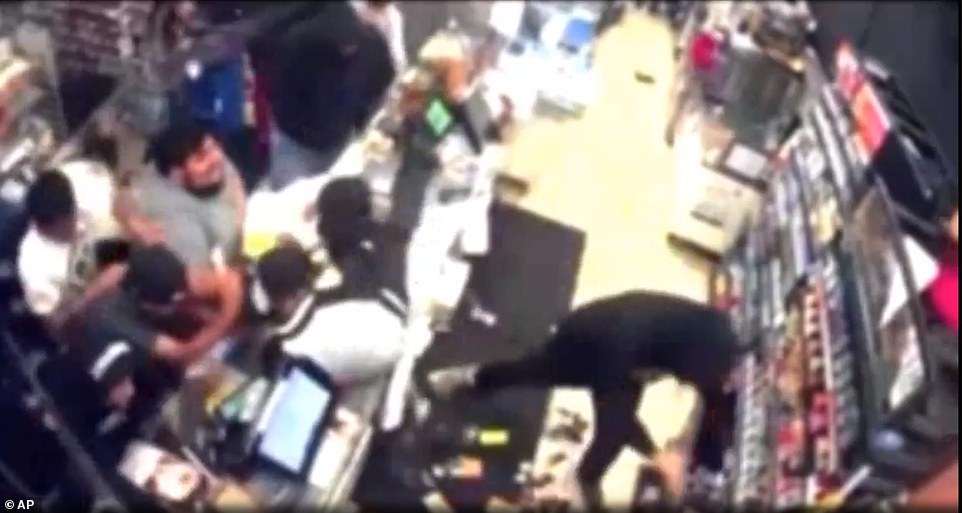 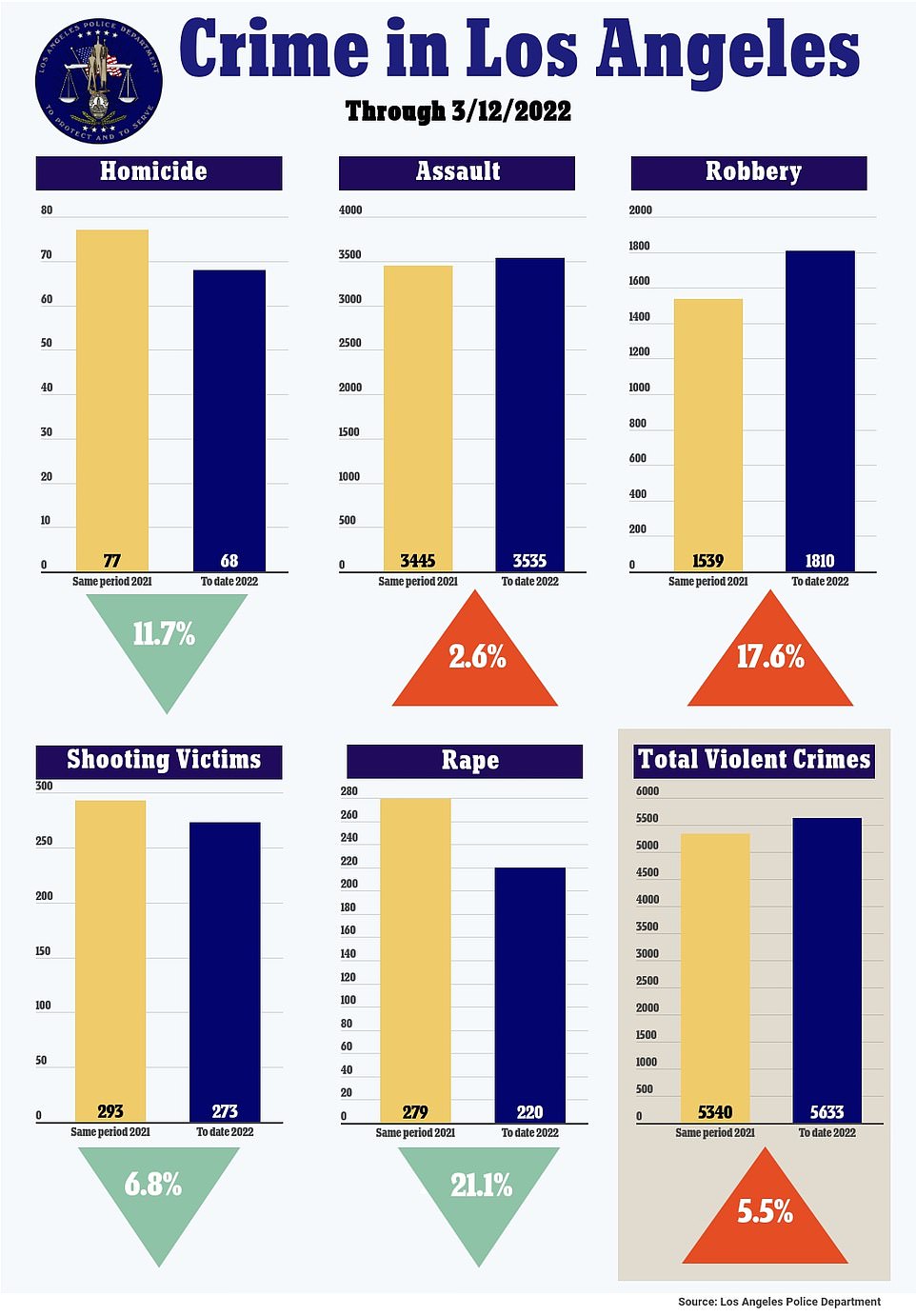 LAPD Det. Ryan Moreno said that there was ‘no resistance’ and ‘no fight put up’ by the staff members working that day.

He added: ‘We really want to prevent this from becoming a new trend.’

Those involved face charges of vandalism, grand theft and looting when they are apprehended by authorities.

Before the store incident, the crowd held a street takeover nearby and blocked traffic with their vehicles and performed ‘donuts.’

Another street takeover, just an hour later and less than two miles down the road saw a teenage boy shot dead.

The brazen incident comes after Proposition 47 was passed in California in 2014, meaning that some property theft was reduced from a felony to a misdemeanor.

The law, aimed at complying with a California Supreme Court order to reduce prison overcrowding, raised the threshold for felony theft to $950 from $400.

Two or more people who conspire to ‘cheat and defraud any person or any property, by any means which are in themselves criminal’ can face only one year in a county prison, a fine of $10k or a combination of th two.

Soft-on-crime progressive District Attorney George Gascón has been slammed for his policies which other politicians claim ‘weaken’ their laws.

LAPD data shows that as of March 2022 robberies had skyrocketed in Los Angeles by a staggering 17.2% from the same period of time in 2021.

Fed-up California assemblyman Rudy Salas, a Democrat, introduced a bill that would lower the amount a suspect can steal before facing a felony to $400, which was the original threshold before Proposition 47 passed.

Salas said: ‘Enough is enough, we need to fight back against the criminals who are stealing from our communities.

‘We have seen the unintended consequences of Prop 47’s weakening of our theft laws and I believe California voters are ready to make their voices heard on this issue again.’

The wild street takeovers have become more of an issue in recent months, with locals in LA begging police to do something about the problem. 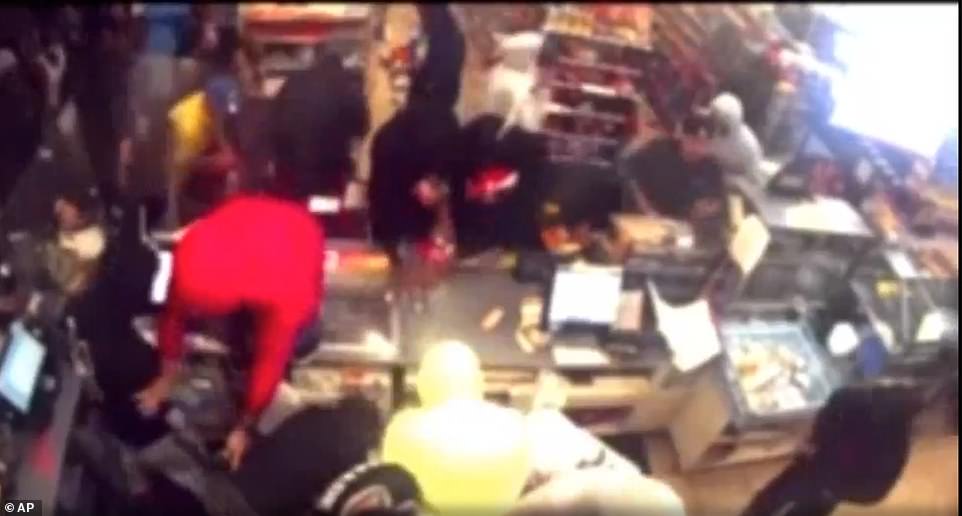 Looters threw themselves over the counter to pocket as much as they could, as others shoved packets of snacks into bags before fleeing 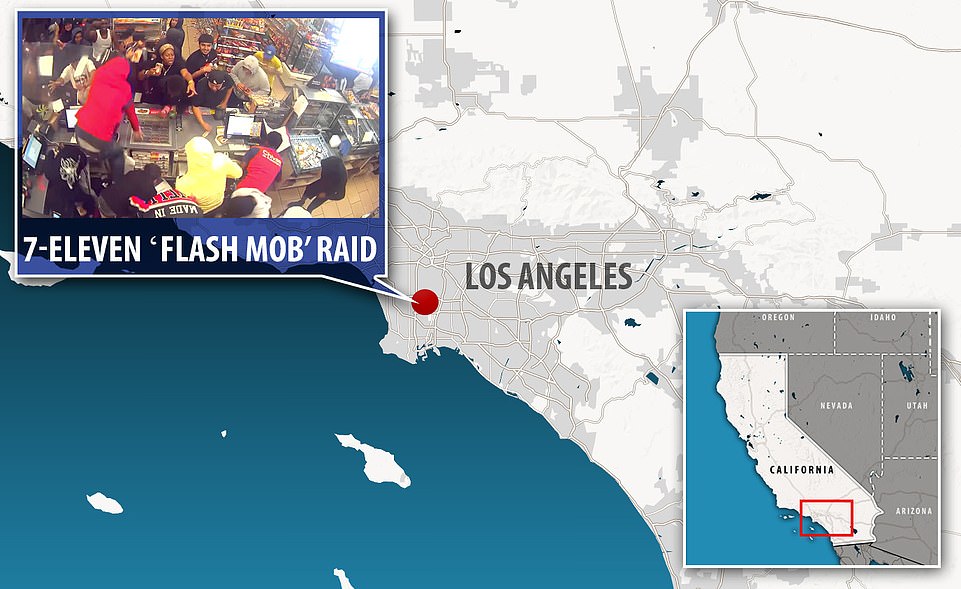 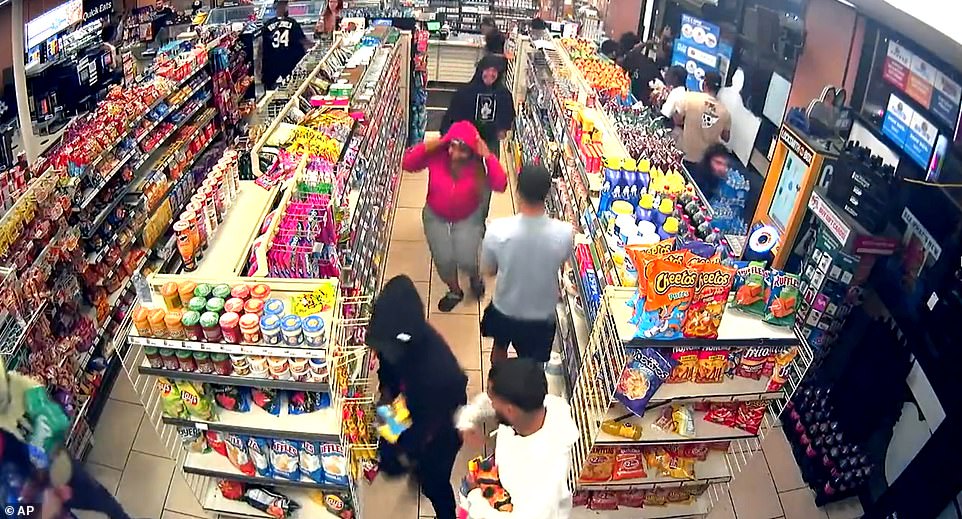 The gang of people were seen grabbing as much as they could before fleeing, with some putting their hoods up to hide their identities 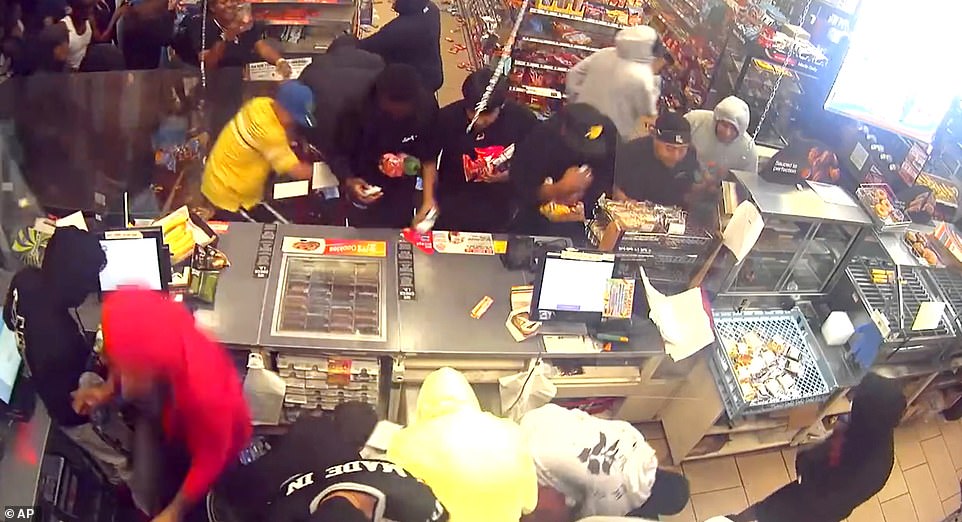 The protective COVID-19 screen was ripped down by the flash mob, who could be seen looting everything they could get theirs hands on 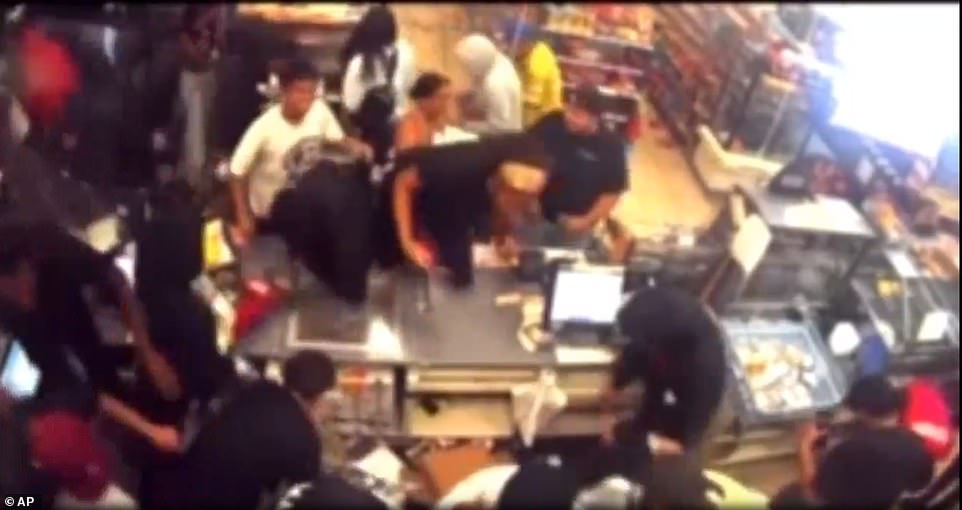 According to the Los Angeles Police Department the suspects also started throwing items at them, with around 100 people involved in the chaos

Proposition 47 was passed by California voters on November 5, 2014.

It made some ‘non-violent’ property crimes, where the value of the stolen goods does not exceed $950, into misdemeanors.

It also made some ‘simple’ drug possession offenses into misdemeanors, and allows past convictions for these charges to be reduced to a misdemeanor by a court.

Under California law, though, if two or more person’s conspire to ‘cheat and defraud any person or any property, by any means which are in themselves criminal’ they can face no more than one year in county prison, a fine of $10,000 or a combination of the two.

One incident saw a man shot dead at the intersection of Hoover Street and West Century Boulevard on July 4.

Another in South LA saw cars spinning out of control before injuring a bystander as they performed donuts and dangerous tricks with their cars. Residents are claiming that the events are happening ‘once a week’ if not more, making them scared to leave their homes.

A spokesman for the LAPD added: ‘On August 15, 2022, around 12:40 a.m., a street takeover initiated at the intersection of Figueroa Street and El Segundo Boulevard.

‘During the incident, spectators exited their vehicles and watched as motorists recklessly drove in a maneuver known as ‘doing donuts.’

‘The maneuver involves purposely losing tire traction while driving in a circular motion and continuing to accelerate. This results in a series of skid marks left on the pavement.

‘The spectators then formed a ‘flash mob’ of looters and rushed a nearby 7-Eleven located at the northwest corner of Figueroa Street and El Segundo Boulevard.

‘Video surveillance from the store showed the looters fanning out across the store and grabbing all the snacks, drinks, cigarettes, lotto tickets, and other merchandise.

‘Looters also vandalized the store and threw merchandise at employees.

‘The looters then exited the store to the surrounding parking lots and streets, and quickly dispersed before police arrived.

‘The term ‘flash mob’ was first used to describe a large public gathering at which people perform an unusual or seemingly random act and then disperse, typically organized by means of the internet or social media.

‘In the latest cases, however, ‘flash mobs’ have turned from fun spontaneous events to opportunistic criminal occurrences.

‘Officers obtained surveillance video of the looters to identify and the arrest the individuals involved.’