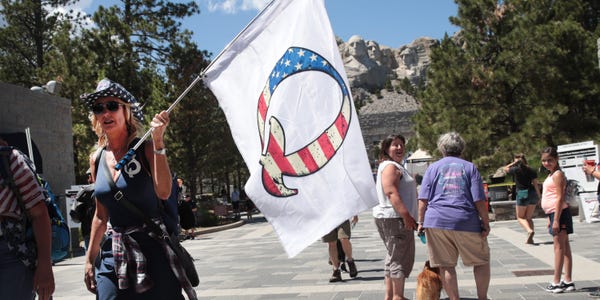 Christy Croft, a sex-trafficking survivor, was scrolling through social media in July when they came across a debunked QAnon conspiracy claiming that the furniture company Wayfair was selling kidnapped children in expensive dresser-like items.

At the time, hundreds of thousands of people on social media were discussing the baseless conspiracy. Croft decided to look into the theory when they saw other survivors and fellow anti-trafficking professionals criticizing it.

"I was appalled, and immediately frustrated with the really strong pushback I encountered with people when I tried to correct misinformation," Croft told Insider.

The QAnon theory about Wayfair is not true. Wayfair has denied claims that it is trafficking children, and the conspiracy theory has been debunked by Snopes, independent fact-checkers, and many journalists.

This wasn't the first time Croft encountered misinformation while working as an anti-sex-trafficking activist. But Croft has noticed an uptick, driven by the QAnon movement's ability to spread misinformation so easily.

At its core, the QAnon movement is premised on the baseless conspiracy theory that President Donald Trump is secretly fighting a cabal of satanic pedophiles and cannibals. One of its most prominent preoccupations is the false notion that Democratic elites run a vast pedophilic sex trafficking ring.

QAnon theories, Croft told Insider, make it harder to fight misinformation about the real-life phenomenon and hijack attention to the cause. Croft and other sex-trafficking survivors told Insider that the discredited theories are exploitative and, oftentimes, infuriating.

"As a survivor, when I see it, I feel exploited again. I feel like my trauma and the trauma of people like me is being exploited for purposes other than ending trafficking," Croft said.

Croft said that QAnon believers often question and attempt to discredit work done by survivors, accusing them as being "part of the cover-up."

"It's really infuriating when you have survivors who have lived experience and are working full time in this field and have helped tons and tons of survivors saying 'Actually that's not quite right,'" Croft said. "And you have someone with no experience and no professional expertise with a whole day of internet research on unverified sites telling you: 'You don't know your own life.'"

Suamhirs Piraino-Guzman, who as a child was kidnapped from his hometown in Honduras, smuggled into the US by human traffickers, and repeatedly sexually assaulted, told Insider that the anti-trafficking movement has been fighting "huge amounts of misinformation" for years.

"It's really difficult for people to really differentiate the super-sensationalization of human trafficking," Piraino-Guzman, who worked on former President Barack Obama's US Advisory Council on Human Trafficking, said. "People don't really know what human trafficking is, and they're creating these type of stories distract from the real issue."

As Insider's Rachel Greenspan has reported, QAnon believers package their sex-trafficking conspiracy theories "into simple, hard-to-challenge 'Save the Children' rhetoric" that's been spread across the internet, leading to fundraisers, protests, and rallies calling for help to prevent trafficking.

Members of the movement, which originated on the internet message board 4chan and has been labeled a potential domestic terror threat by the FBI, spread the false "Pizzagate" claim that Hillary Clinton and other elite Democrats ran a sex-abuse ring from a Washington, DC, pizzeria.

In recent months, followers have also claimed that phishing scam texts sent by people posing to be the USPS were part of a human trafficking scheme.

But QAnon's anti-trafficking campaign, which has been supported by a number of candidates in the upcoming November election, relies on exaggerated data, false accusations of children being kidnapped from their homes, and partisan rhetoric.

Ultimately, hard data on sex trafficking is hard to establish — some organizations recirculate out-of-date statistics, while others avoid producing credible research on the topic, according to HuffPost reporter Michael Hobbes, who wrote in an article detailing the difficulty in finding hard numbers on the issue.

The very premise that Trump has a particularly hard stance against child sex trafficking is also dubious, as federal prosecutions of those cases have fallen under his presidency.

Piraino-Guzman said that by sharing misinformation, people are avoiding acknowledging larger issues when it comes to trafficking, like helping vulnerable communities.

"It's easier to scream like bloody hell that there is an issue here rather than actually doing something to acknowledge that maybe we are consuming products act are produced by forced labor, or we are maybe staying in hotel rooms where somebody has been sexually exploited," he said.

According to the anti-trafficking organization The Polaris Project, vulnerable communities are most at risk of being trafficked, which the Department of Justice defines as "exploiting a person for labor, services, or commercial sex."

Sex traffickers normally target vulnerable communities by luring them in with "offer of food, clothes, attention, friendship, love, and a seemingly safe place to sleep," according to the Department of Justice.

Most often, factors including recent relocation, substance use, mental health issues, involvement in child welfare, homelessness, or being a runaway can put a person at risk of being trafficked, the Polaris Project said.

When it comes to child sex-trafficking LGBTQ youth are at particular risk, because they make up 40% of homeless youth, Polaris said. Polaris said girls in Black communities are also at higher risk, primarily because they're likely to live in underserved areas.

K.D. Roche, a child sex-trafficking survivor who consults for a number of anti-trafficking organizations, told Insider that because of the novel coronavirus pandemic, many vulnerable children have been unable to find safe spaces in schools or with their counselors.

Roche, who wrote a book about his own survivor story called "Fragments: A Post-Traumatic Paradigm," added that he's spent time at trainings and webinars answering questions about QAnon and its Pizzagate and Wayfair conspiracy theories.

"I've definitely noticed this push of 'Save the Children' while simultaneously ignoring the problem that exists, that has left these kids vulnerable to trafficking to begin with," Roche said. "It's working against the work we're already doing and it's taking up a big chunk of time."

"It starts with having a well-educated community on what human trafficking is," he said.

"It's a lot harder to exploit people who are getting their needs met through other ways. So if people's needs for income and housing and safety and food and mental health treatment are already being met, these traffickers will have less leverage," Croft said. "So focusing on providing people with social support and wellness, filling in some of those gaps in our safety net, is trafficking prevention."