The conviction of a drug trafficker who worked for the Mokbel crime family has been overturned in the second case to fall in the wake of the Lawyer X scandal.

Zlate "Steve" Cvetanovski, who had been behind bars for 11 years, had his conviction for drug trafficking quashed today after the Court of Appeal found a substantial miscarriage of justice had occurred in his case. 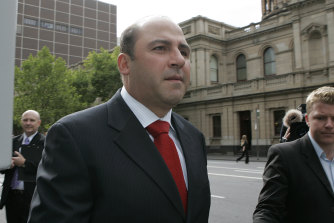 Tony Mokbel outside the Supreme Court in 2006.Credit:Angela Wylie

The 54-year-old appealed his conviction for trafficking in a large commercial quantity of the drug ice amid concerns his case had been corrupted by the actions of his former barrister Nicola Gobbo, known as Lawyer X and Informer 3838 for her role as a double agent and police informer.

Justices Chris Maxwell, David Beach and Mark Weinberg said the failure of Victoria Police to disclose
Ms Gobbo's role and that secret payments were made to the key witness against Cvetanovski resulted in a substantial miscarriage of justice.

The court was told that detectives from the gangland taskforce Purana paid at least $10,000 into the witness' prison account over a five-year period from 2006 to 2011. During this period he was a jailhouse witness in dozens of cases and investigations.

Under the law, any compensation provided to a witness must be disclosed in criminal proceedings because they are considered "inducements" that can affect a witness' credibility.

"The failure of Victoria Police to disclose financial payments to Mr Cooper prevented [Cvetanovski] from properly testing Mr Cooper's evidence which was central to the prosecution case, resulting in a substantial miscarriage of justice," Chief Crown prosecutor Brendan Kissane, QC, wrote in submissions to the Court of Appeal.

Justice Maxwell said the Crown's concession was properly made.

The non-disclosure of Ms Gobbo's involvement and the payments the key witness against Cvetanovski received, meant Cvetanovski was unable to properly interrogate the witness.

"The principals governing disclosure are fundamental to the integrity of criminal trials," Justice Maxwell said.

The key witness, a drug cook, turned police witness after Ms Gobbo simultaneously informed on and represented him.

His evidence was used to bring down Cvetanovski and 23 other people, including drug boss Tony Mokbel.

Today’s Court of Appeal decision could have major repercussions for those convictions.

The case of the key witness, whose identity is protected by the pseudonym 'Mr Cooper', and Ms Gobbo's role in it has become the centrepiece of the Royal Commission into the Management of Police Informants, which found the witness provided sworn statements in 45 other major police investigations into drug trafficking and the criminal underworld.

Cvetanovski’s appeal was headed by lawyer Ruth Parker, of Galbally Parker, who spearheaded the first successful appeal against conviction in connection with the Lawyer X scandal.

Faruk Orman, jailed over allegations he was the getaway driver in the 2002 gangland execution of Victor Peirce, had his murder conviction overturned in the Court of Appeal last year.