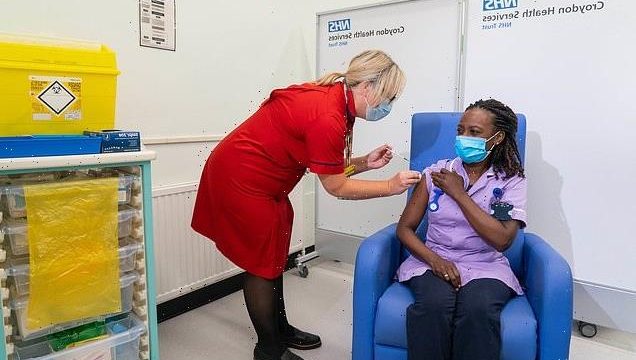 Top doctors have pledged to shun any potential booster Covid vaccine they will be offered amid backlash that spare doses are not being sent to poorer countries.

Third jabs are a key part of No10’s plan to avoid another crisis this winter and prevent another lockdown. Evidence has shown immunity can wane over time.

Up to 32million Britons over the age of 50, frontline health workers and care home residents will be offered another jab in the coming months.

Experts are yet to decide whether there should be a wider rollout in the UK, but Israel has already pledged to give children as young as 12 a third dose.

But ever since the idea of dishing out top-up vaccines was first touted, some experts have insisted extra jabs would be better used by giving people in other countries a first dose.

Now some leading British medics have declared that they will opt out of getting any booster when they are offered.

Dr Jake Dunning, an infectious diseases researcher at the University of Oxford and the Royal Free Hospital, compared the rollout to giving an extra life jacket to people ‘while ignoring those people who have no life jackets whatsoever’.

One Public Health England expert said they could not accept a booster jab ‘in good conscience’.

It comes after the the US Food and Drug Administration approved boosters for only the over-65s and those who are at high risk of developing a severe case of the virus. 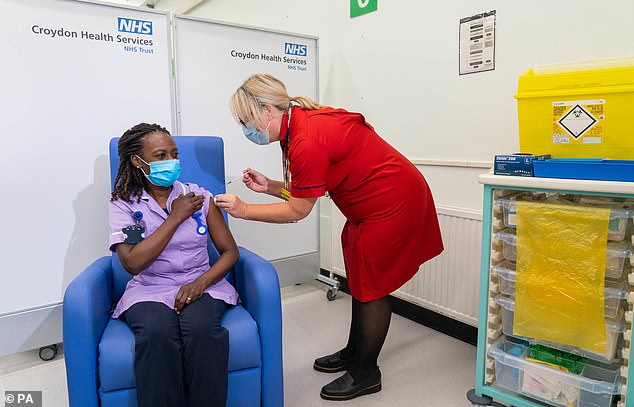 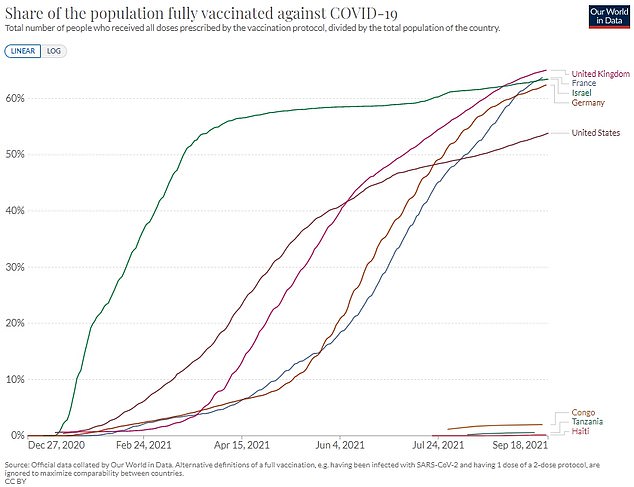 Some 48.5million over-16s (89.4 per cent) in the UK have received at least one Covid vaccine, while 44.4million (81.7 per cent) are double jabbed. But in some poorer countries, such as Haiti, as little as 0.1 per cent have had a single dose

Dr Dunning told The Telegraph he would not accept a third dose if he was offered one because there was little evidence of any benefit for young healthy people.

He said: ‘It’s like giving an extra life jacket to people already wearing functioning (but not always perfect) life jackets, just to make sure, while ignoring those people who have no life jackets whatsoever.

‘I just feel very uneasy accepting a booster myself and I hope to draw attention to the ongoing crisis of inadequate vaccinations in poorer countries.

Covid vaccines are being injected into healthy 12 to 15-year-olds in schools across Britain today for the first time.

A single dose of Pfizer’s jab is being used for children in the age group and it’s hoped that the rollout will prevent further disruptions to their education.

Parental consent is being sought, but children can overrule parents who do not want them to get the jab if deemed ‘competent’, in a move that has caused controversy.

More than 3million under-16s are eligible for the vaccines and ministers expect at least 60 per cent to take up the offer.

The jabs are being administered at some schools in England today and the rollout is due to begin in Scotland and Wales later this week.

In Northern Ireland, the head of the region’s vaccination programme said jabs are likely to be offered in schools from October.

The scientific community has been split over vaccinating healthy children against Covid because the virus poses such a low risk to them.

No10’s own advisory panel said earlier this month that immunising them would only provide ‘marginal’ benefit to their health, and not enough to advise a mass rollout.

But Chris Whitty and the chief medical officers in the devolved nations came down in favour of the rollout after weighing up the wider benefits to children.

They said hundreds of thousands of school absences could be prevented and school closures averted if there was good uptake of the vaccines.

‘If there are others who feel like me and act in the same way, hopefully it will send a ‘not in my name’ signal to my own government and other rich countries.’

The decision came amid concerns of an expected fourth wave in the coming months and waning protection among the first groups who got the vaccines.

Experts hope third doses will boost protection against severe illness, hospitalisation and death over the winter, reducing pressure on the health service.

The Pfizer jab – or a half dose of Moderna – will be administered six months after those eligible received their second dose, regardless of which injection they received previously.

But if a person is allergic to those vaccines, they will be given AstraZeneca’s.

But Pouria Hadjibagheri, technical and development lead of Public Health England’s Covid dashboard said he would not be taking a third dose.

He tweeted: ‘I don’t think that I can in good conscience accept one either. No matter how I look at it, I just can’t convince myself.’

And Dr Muge Cevik, a clinical lecturer in infectious diseases and medical virology at the University of St Andrews, who is also a member of the Government’s New and Emerging Respiratory Virus Threats Advisory Group (Nervtag) supported his stance.

She said: ‘As a healthy doubled-vaxxed individual, I don’t think I can be more protected than I already am.’

But in some poorer countries, as little as 0.1 per cent have had a single dose.

Sir Andrew Pollard, chair of the JCVI who helped to develop AstraZeneca’s vaccine, has consistently argued for extra jabs to be given abroad.

He told the All-Party Parliamentary Group on Coronavirus last month that any waning of protection provided by the vaccines would be ‘gradual’ and would be picked up on quickly through UK surveillance systems.

And the ‘greatest priority’ for vaccines was to give them to those ‘at high risk of dying from Covid, including older adults, those with health conditions and health care workers, wherever they live’, he said.

Sir Pollard added: ‘Those with zero doses have a lot to gain from receiving a vaccine today and so should be ahead of those who are already two doses up.’

Professor Dame Sarah Gilbert, the lead scientist on the Oxford jab, said ‘we have to do better’ at getting vaccines to other countries.

And Professor Danny Altmann, an immunologist at Imperial College London and a member of SAGE’s immunology taskforce, said sharing out vaccines equitably is the best approach ‘because the fewer millions of lungs you have virus replicating in, the better off we’re all going to be’.

But the UK is not alone in its booster plans. Israel began giving out extra jabs months ago and France and Germany also going ahead with boosters.

A Government spokesman said: ‘We have committed to donate 100million doses by June 2022 and have already delivered over 9million doses to developing nations across Africa and Asia.

‘We continue to work to ensure any vaccine that the UK does not need is reallocated to other countries who require it, wherever possible.

‘It’s vital all those who are eligible for their booster jab get it as soon as they’re offered, to ensure all those most vulnerable to Covid receive the best possible protection as we head into the winter months.’

It comes as advisers to the US FDA recommended over-65s, those with certain underlying conditions and healthcare workers should get a booster jab.

But experts said the move was a ‘step back’ from the initially proposed widespread booster campaign.

A White House spokesperson said boosters will be dished out once the FDA makes a decision on third doses, which is expected this week.