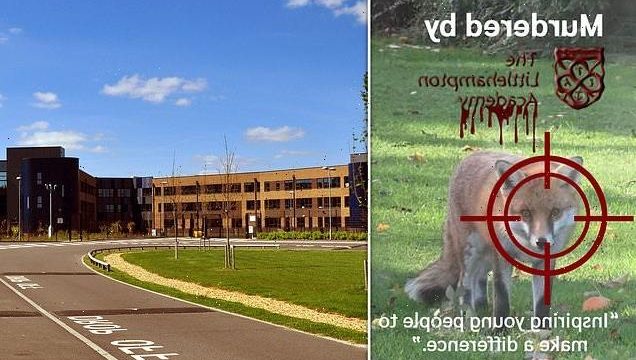 A Christian academy has been blasted after shooting dead a fox and her three cubs living on their school field.

Parents and animal charities slammed the secondary school for its ‘cruel and barbaric’ choice and for not looking for a more humane deterrent.

The Littlehampton Academy, in West Sussex, said it had seen ‘increasing amounts of damage’ and an ‘increasing prevalence of fox faeces’ that was a danger to children.

The school also claimed they had found a den in an area intended for educational use. 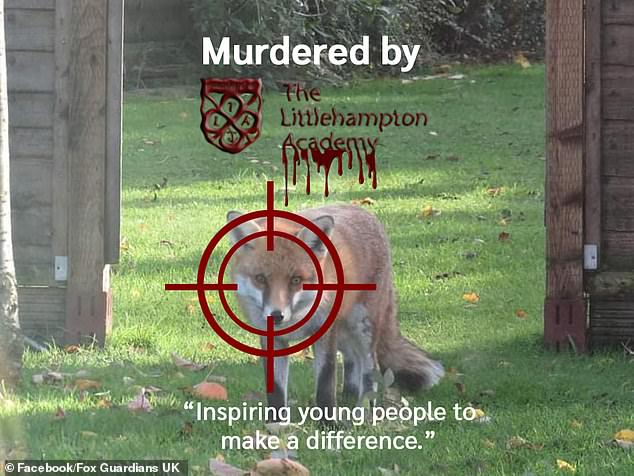 Parents and animal charities slammed the secondary school for its ‘cruel and barbaric’ choice and for not looking for a more humane deterrent. Pictured: Fox Guardians take on the deaths

Fox Guardians, a West Sussex charity, wrote an open letter to the school saying: ‘We were shocked to be informed by extremely distressed local residents and parents of children who are pupils at your school that on the night of the 4th of August a much-loved vixen and her three cubs were shot and killed on the grounds of the Littlehampton Academy by paid marksmen you had employed.

‘The foxes’ only ”crime” was that they soiled your playing fields.’ Charlotte Owen, from Sussex Wildlife Trust, said: ‘The killing of any wild animal should be a last resort.

‘Foxes are widespread and common, so neither translocation nor killing will provide a long-term solution.’

Ms Owen added it’s ‘far more effective’ to focus on deterrence and that there are a ‘number of ways to do this humanely’.

Parents and local residents also voiced their anger at the killing of the fox and her cubs.

Brandon Pragnell said: ‘Personally I think it’s cruel and barbaric to even think of killing them let alone their young.

‘They didn’t even try to relocate them, there are so many different things they could’ve done to move them on off the school property but instead they inhumanely shot them.

‘Having three and a half years experience working and rehabilitating wildlife, I hear of this so often, selfish people just going out of their way to destroy innocent creatures for no reason.

‘The foxes weren’t doing any harm to the students of the school.’ Kirsten Ann Connelly said: ‘I think it’s disgusting.

‘In this day and age, they should be setting an example to their students on how to nurture nature not destroy it.’ 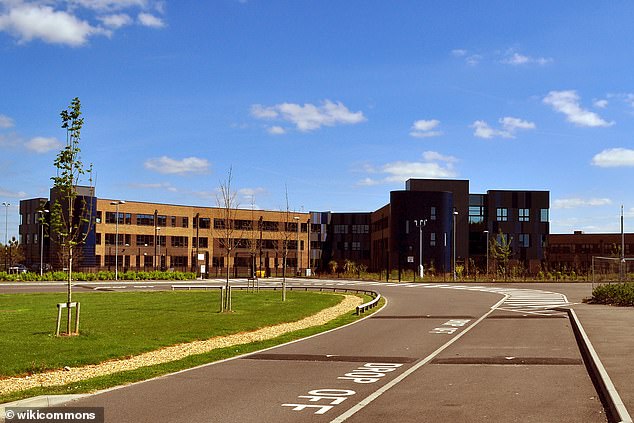 A spokesman for the school, which describes itself as a Christian Academy, said the school had explored other options but their ‘choices were limited’.

They said: ‘We did look at trapping them as an option but, once trapped they would be destroyed, and on balance, we felt that allowing them to be trapped and held in cages for a period before being destroyed was a worse option.

‘This is not something we decided on lightly but I hope that you can see that as an educational establishment with over 1,300 children on site we have a responsibility to ensure their safety and health, and so we took this difficult decision.’

The government states foxes may be ‘humanely killed’ if they are on private property using a ‘suitable firearm and ammunition’.

It also states foxes should not be relocated as it will cause them stress transporting them to an unfamiliar environment.

Netflixs Clickbait Shoots to the Top of Nielsens Streaming Rankings