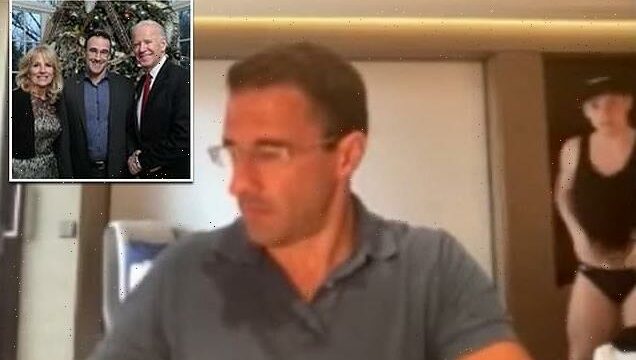 Arizona lawmaker, 45, who worked in Obama administration is left red-faced after speedo-clad ‘friend’, 24, struts through his cruise ship cabin and flaunts muscles during official Zoom meeting

A half-naked man wearing a Speedo popped into the background of an Arizona counselor’s Zoom call during a meeting of the Pima County Board of Supervisors on Tuesday.

Openly Gay County Supervisor Dr. Matt Heinz, 45, who previously served in the Obama administration, joined the meeting remotely from a cruise ship in the Caribbean.

The 9:00 am meeting was two hours old when Heinz’s unidentified 24-year-old travel companion wandered in to the shot. The man is wearing black vest and a black Speedo.

The man begins to lift up his shirt, then freezes and looks at the computer, apparently not immediately realizing that Heinz was in a meeting. The physician quickly turned off his camera at that point.

None of Heinz’s colleagues made reference to the cameo. The board is scheduled to meet again on January 24.

The physician later explained that the man in the video is his ‘travel companion’ and said that the pair are not an item nor is he a sex worker. He compared the moment to other viral moments in which Zoom calls are interrupted by children and pets.

County Supervisor Dr. Matt Heinz, who previously served in the Obama administration, joined a meeting of the Pima County Board remotely from a cruise ship in the Caribbean 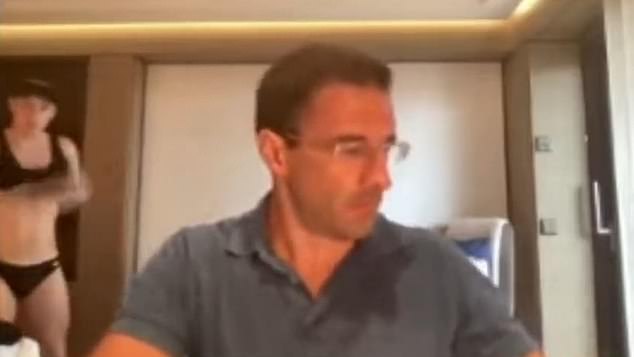 The 9:00 am meeting was two hours old when the openly-gay Heinz’s unidentified 24-year-old travel companion wandered into the shot

After the clip went viral, Heinz addressed the awkward moment in an interview with The Advocate.

The Democrat said that he was ‘baffled’ with how much attention the clip has generated. Heinz explained that he is on a 10-day Ritz Carlton cruise with a ‘travel companion, a friend.’

Heinz said his friend, who is more than 20 years his junior, had been out on the balcony of their room and came back in to get a shirt when the moment was captured.

The good doctor did not identify the companion merely saying: ‘He’s 24. He’s clearly an adult, and we’re good friends who travel well together.’

Heinz later labored the point saying: ‘Leave my friend alone. He was in a swimsuit. He accidentally walked into the frame for like not even three seconds, was not naked, is clearly an adult, and is not a sex worker — not that there’s anything wrong with that.’ 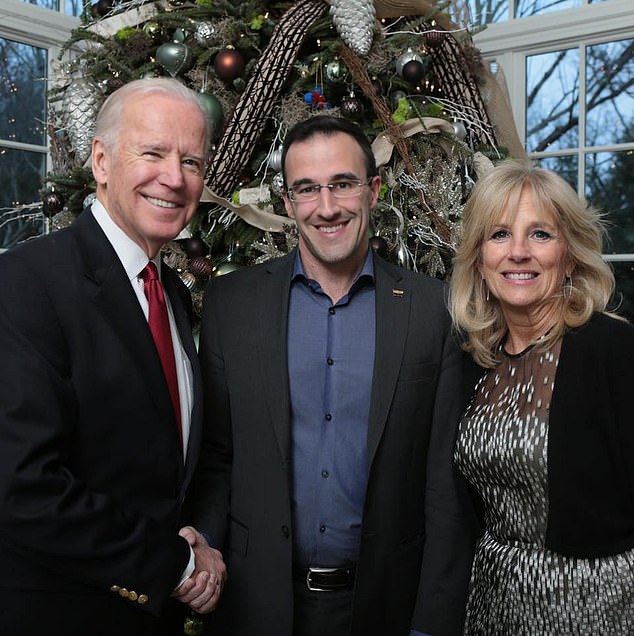 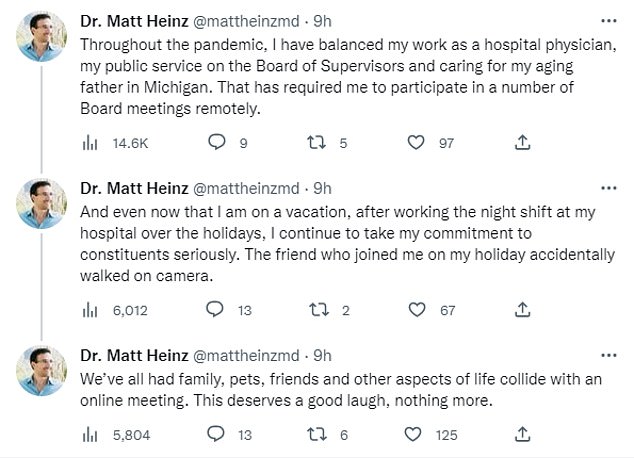 Speaking about why he was calling in to the meeting, Heinz said that because he is a single man, he works a lot around the holidays in order to allow his colleagues who have families to spend time at home.

Heinz also mentioned that he works three full-time jobs, in addition to his medical and political work, the Michigan native has a small business. On Twitter, Heinz also mentions that he spends a lot his time caring for his aging father.

His cruise ends on Saturday at which point he’s due to fly home via Florida. At the time of the interview, Heinz was at the Panama Canal. 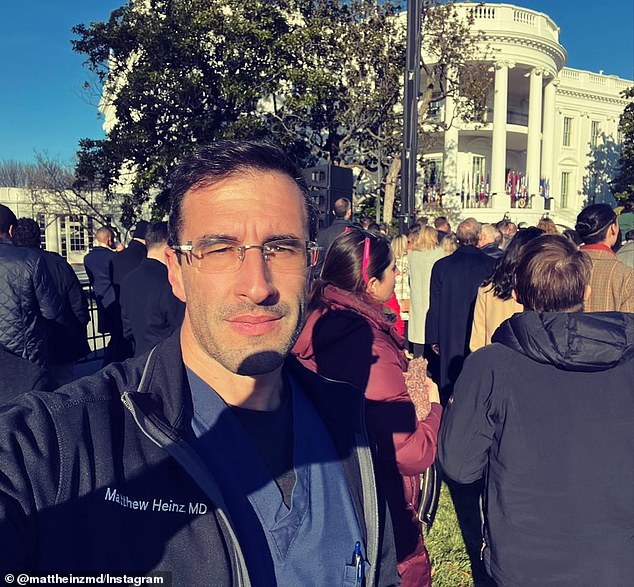 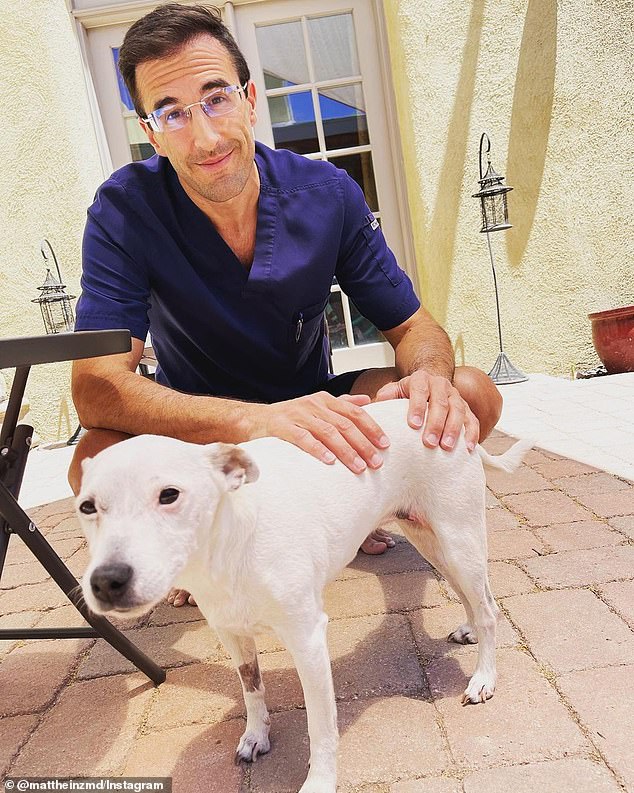 Heinz is an attending physician at the Tucson Medical Center, a role he’s been in since 2003. In 2008, Heinz made history by becoming the first openly gay member of Arizona’s House of Representatives

Heinz is an attending physician at the Tucson Medical Center, a role he’s been in since 2003. In 2008, Heinz made history by becoming the first openly gay member of Arizona’s House of Representatives. He served two terms in the house.

According to his official website, the issues close to Heinz’s heart are veteran’s affairs, seniors and healthcare in general.

Between 2013 and 2015, Heinz worked in the Obama administration as the Director of Provider Outreach in the Office of Intergovernmental and External Affairs.

In 2021, Heinz became the Pima County Supervisor. He was an outspoken advocate for mask mandates in the county throughout his first year in office.

According to posts on his Instagram page, Heinz was present at Biden’s signing of the Respect for Marriage Act in December 2022. He has made multiple unsuccessful attempts at gaining the Democratic nomination for congressional elections in various districts.