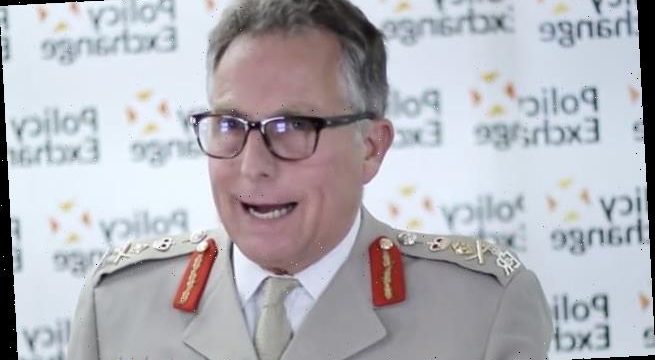 Russia and China are waging ‘political war’ on the West with the express goal of ‘breaking our willpower’, Britain’s highest ranking army officer warned today.

Chief of the Defence Staff General Sir Nick Carter said hostile powers ‘cannot afford’ a militarised conflict and so are turning to cyber attacks and disinformation.

He said such actions fall outside the traditional parameters of declaring war but nevertheless aim to sow division and sap ‘economic, political and social resilience’.

Announcing the greatest shift in the UK’s defence strategy ‘for a generation’, Sir Nick said: ‘We must fundamentally change our thinking if we are not to be overwhelmed.’ 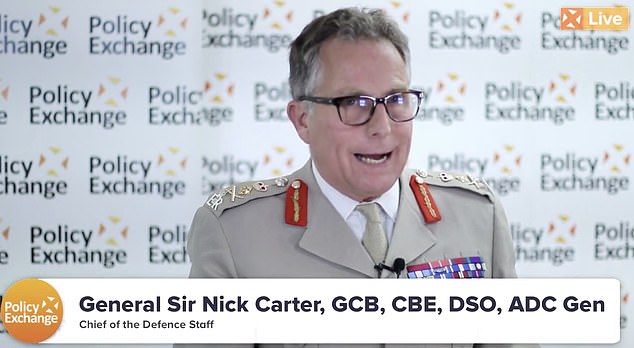 He told the Policy Exchange think tank on Wednesday: ‘These regimes believe that they are already engaged in an intense form of conflict that is predominantly political rather than kinetic.

‘Their strategy of “political warfare” is designed to undermine cohesion, to erode economic, political and social resilience, and to compete for strategic advantage in key regions of the world.

‘Their goal is to win without going to war: to achieve their objectives by breaking our willpower, using attacks below the threshold that would prompt a war-fighting response.

‘These attacks on our way of life from authoritarian rivals and extremist ideologies are remarkably difficult to defeat without undermining the very freedoms we want to protect. We are exposed through our openness.’

His speech, in which he launched the Integrated Operating Concept 2025, name-checked Russia and China as potential threats.

He added that Beijing is ‘forging a future of mass surveillance… and is rapidly exporting these tools to other parts of the world.’

And he highlighted evidence of how rogue actors are exploiting the coronavirus pandemic, including ‘pro-Russian vaccine politics whose disinformation narratives are designed to permeate anti-vaccination social media groups.’ 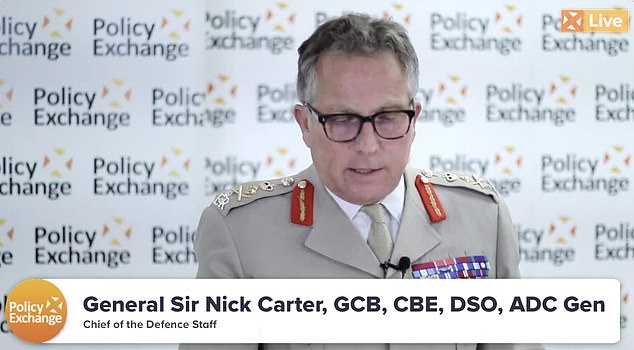 Announcing the greatest shift in the UK’s defence strategy ‘for a generation’, Sir Nick said: ‘We must fundamentally change our thinking if we are not to be overwhelmed’

Sir Nick also said that rival powers have observed Western military tactics and are adapting their methods to exploit weakness.

He said: ‘Our adversaries have studied our ‘Western way of war’, identified our vulnerabilities and modernised their own capabilities to target them. The campaigns of the last 30 years have been played out over global media networks.

‘From the first Gulf War in the early 1990s to the air strikes in Bosnia and Kosovo, the response to the terrorist attacks on embassies in Kenya and Tanzania, and of course the campaigns in Iraq, Afghanistan and Libya – all have been watched closely by our rivals.’

Sir Nick even said that ‘Russia has created battle laboratories from real life events to develop their tactics and battle harden a new generation of soldiers’.

To combat such rapidly evolving threats, the Integrated Operating Concept will shore up defences which fall below the ‘threshold’ of typical warefare.

He also stressed the need to cement international alliances, forge better cooperation with the various strands of the armed forces and modernise the British military.