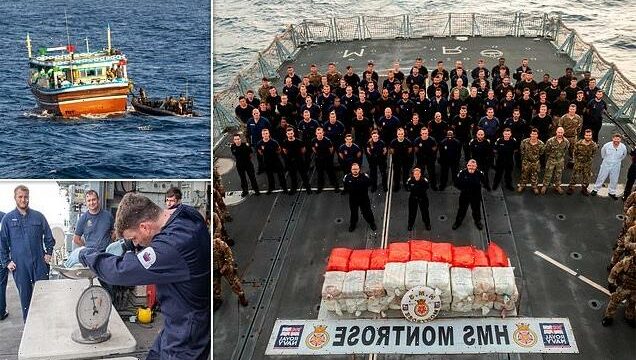 Royal Navy seizes record-breaking £15.5million worth of crystal methamphetamine from a dhow in Arabian Sea

A Royal Navy frigate has seized a record-breaking £15.5 million worth of drugs from a dhow in the Arabian Sea in its fifth narcotics raid this year.

HMS Montrose targeted the small vessel after the ship’s Wildcat helicopter tracked the movements of the suspect boat.

A boarding party of Royal Marines searched the vessel and found 870kg of crystal methamphetamine in a secret compartment following the six-hour operation.

The haul has a wholesale value of £15.5 million, according to the National Crime Agency.

It overtakes the previous record haul from 2019, when HMS Defender found 131kg of crystal meth from a dhow sailing in the Gulf of Oman. 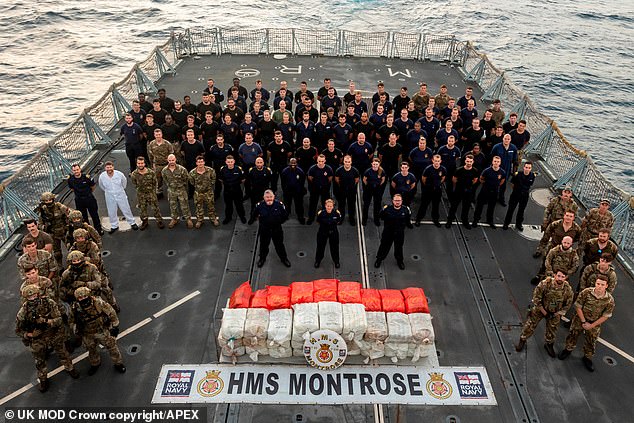 HMS Montrose (pictured is her team of sailors and Royal Marines) has seized a record-breaking £15.5 million worth of drugs (bottom centre) from a dhow in the Arabian Sea in its fifth narcotics raid this year 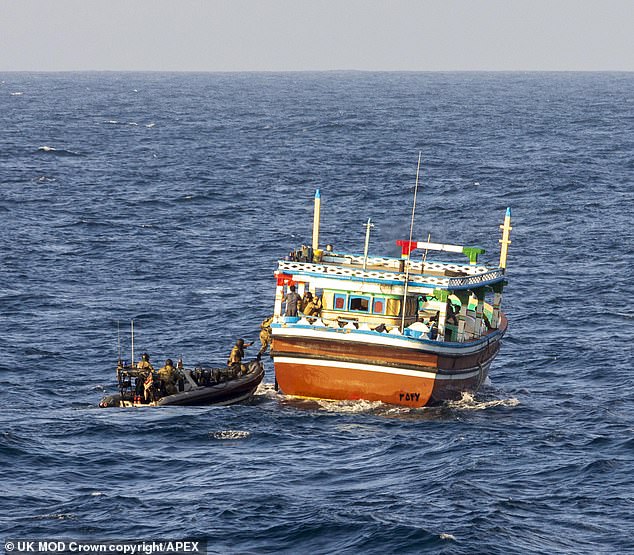 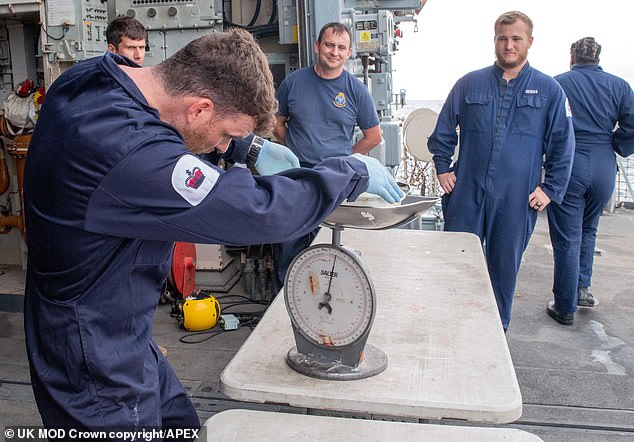 The haul (pictured being accounted and tested for) has a record-breaking wholesale value of £15.5 million, according to the National Crime Agency

A navy spokesman said: ‘HMS Montrose pounced after her Wildcat helicopter located and tracked the suspect dhow until the frigate was in range to launch her boarding teams in her boats.

‘Royal Marines from 42 Commando, the UK military’s specialists in these operations, seized control of the vessel in choppy conditions, before sailors moved in to search the craft for any illegal cargo, while overhead the Wildcat observed proceedings and provided cover for those scouring the dhow for her illicit cargo.

‘Persistence from the boarding team led to a secret compartment being found aboard the vessel, revealing hidden illegal narcotics.

‘The haul was brought back to the frigate for inspection and weighing.’

HMS Montrose, which has been based in the Middle East since 2019, has intercepted narcotics worth nearly £47 million this year.

Commander Claire Thompson, the frigate’s commanding officer, said: ‘We have disrupted the unlawful use of the oceans.

‘A seizure of this size will deal a huge blow to the criminal or terrorist gangs using these illegal narcotics to fund their activity.

‘This success proves we will persistently deny criminals the freedom to conduct their illegal activity on the high seas.

‘Disrupting terrorist organisations, criminals and their funding lines is key to keeping to UK, and rest of the world, safe.

‘It is a privilege to command HMS Montrose and the incredibly professional, highly-trained and dedicated personnel that I have on my team.

‘I could not be prouder of each and every one of them.’