The Andrews government will trial the use of robots in hotel quarantine to monitor breaches and provide an additional layer of security in the wake of multiple coronavirus leakages.

COVID-19 Quarantine Victoria (CQV) will undertake a pilot scheme of a robot that captures both audio and video at one of its hotel in coming weeks as part of a wide-ranging review of the state’s troubled hotel quarantine system. 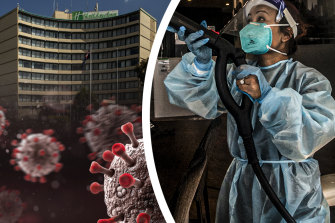 The Victorian government has been grappling with multiple leakages out of the hotel quarantine system.

Security company Monjon, who first offered a similar solution to Victorian officials in September, will provide the technology that was successfully used in the hotel quarantine program for the US Open.

“Monjon is looking forward to the prospect of assisting the Victorian government and its agencies in providing a safe and reliable alternative to limit human movement and human contact in hotels,” chief executive Bryan Goudsblom said.

Victoria’s hotel quarantine program, which was reset late last year after security guards seeded coronavirus into the community that led to the deadly second wave of the pandemic, has been beset by troubles in recent weeks.

There have been multiple leakages out of hotel quarantine despite Premier Daniel Andrews boasting Victoria has the strictest regime in place.

The state was plunged into its third lockdown about two weeks ago following transmission in the Holiday Inn near Melbourne Airport, with strong evidence emerging of the airborne spread of COVID-19.

Two returned travellers who never crossed paths but stayed on the same floor of the Park Royal Hotel transmitted the UK variant of coronavirus between them last month, with Emergency Services Minister Lisa Neville at the time saying: “The viral load of the room of the family of five was so high that just opening the door to pick up food saw the virus travel into the corridor.”

Meanwhile, a 26-year-old Noble Park man who worked at the Grand Hyatt returned a positive COVID-19 test early this month despite being a “model employee” who followed all safety protocols. Authorities at the time launched an investigation into the potential airborne and surface spread of the virus.

A CQV spokeswoman said the agency would undertake a pilot scheme at one of the hotels in coming weeks.

“We are currently considering options to install additional CCTV cameras at quarantine hotels to strengthen the present coverage,” the spokeswoman said.

“CCTV is an important tool for checking resident compliance and wellbeing, but it will not replace the role currently provided by CQV residential support officers in monitoring floors. We are always looking at ways to improve and strengthen the quarantine program, including exploring how technology can play a role within the quarantine system.”

Although all hotels in the hotel quarantine program have a level of CCTV, not all floors are fitted with cameras.

The government had previously indicated it had no plans to install security cameras on each floor, despite Queensland authorities demanding all floors in their hotels scheme have CCTV after a cluster was declared at the Hotel Grand Chancellor.

In its pitch to CQV, Monjon said the robots could provide a ‘floor monitoring’ service to minimise workers’ exposure to returned travellers, who have either tested positive to COVID-19 or are at high risk of being infected.

Mr Goudsblom said the robots were fitted with 360-degree cameras, microphones, speakers, and sensors to monitor a range of situations and provide real-time information to Victoria Police officers and security guards on site.

They are capable of identifying workers, checking they are wearing appropriate personal protective equipment and taking their temperature.

The robots would also be capable of monitoring the floors and check that guests are not opening their doors. If they detected any breaches or anomalies, the technology could send an alert to authorised officers, including police, on-site to enforce the rules, Mr Goudsblom said.

“So instead of having 15 or 20 police officers or security guards to monitor every floor, you’d have five who are on-site at hotel quarantine who can be dispatched easily,” he said.

However, CQV confirmed that it would not be utilising the floor monitoring technology.

Under Victoria’s rebooted hotel quarantine system, Victoria Police took the lead on security and management in a bid to avoid repeating the failures that led to the deadly second wave of the coronavirus pandemic.

Police have since raised concerns about their resources being stretched, and on Tuesday told a parliamentary committee 25 stations were closed to the public temporarily at one point due to a lack of personnel.

At the end of each day, we’ll send you the most important breaking news headlines, evening entertainment ideas and a long read to enjoy.  Sign up to The Sydney Morning Herald’s newsletter here, The Age’s here, Brisbane Times’ here, and WAtoday’s here.