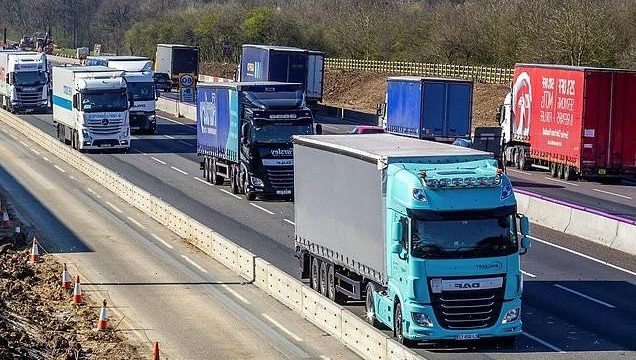 Retailers are calling on the government to issue temporary visas for EU workers to plug a lorry driver shortage that threatens to disrupt Christmas – as gaps were seen on supermarket shelves and McDonald’s ran out of milkshakes.

The British Retail Consortium, which represents major retailers, demanded business secretary Kwasi Kwarteng to push for the emergency measure to plug a shortfall of 90,000 lorry drivers.

Tesco chairman, John Allan, backed the idea, while Richard Walker, managing director of Iceland, said lorry drivers should be added to the government’s essential and skilled workers list to allow those based abroad to apply for a ‘skilled worker visa’. 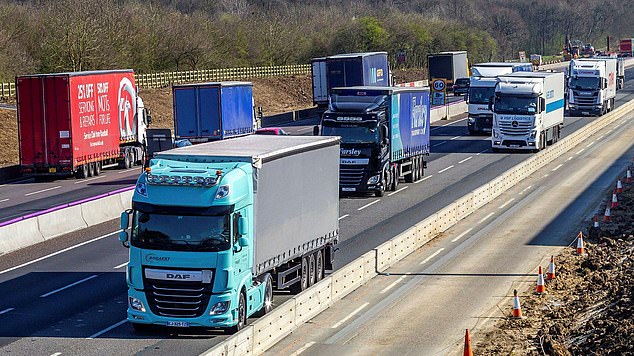 The British Retail Consortium, which represents major retailers, demanded business secretary Kwasi Kwarteng to push for the emergency measure to plug a shortfall of 90,000 lorry drivers

Why is there a supply-chain crisis?

A lack of lorry drivers and food processors is being partly blamed on the new Brexit visa regime introduced on January 1, which penalises lower-skilled migrants in favour of those with qualifications.

But global factors are relevant too, bosses say, including Chinese port closures and a lack of shipping containers. US Vice President Kamala Harris urged Americans to buy Christmas toys early due to a shortage there.

Nick Allen, chief executive of the British Meat Processors Association, told MailOnline Britain has so far been unable to shake its dependency on EU workers who have been leaving due to the pandemic.

The supply of new workers is also being held back by stricter visa rules introduced on January 1.

The most common complaint among UK retailers and food producers is the shortage of lorry drivers, which the Road Haulage Association currently puts at 100,000.

Thousands of prospective drivers are waiting for their HGV tests due to a backlog caused by lockdown, while many existing ones have left the UK after Brexit or to be back with their families during Covid.

Importers are also suffering a financial hit, with dramatically rising transport costs caused by a global lack of shipping containers and a slowdown in freight movements resulting from port closures.

Chinese authorities recently shut Ningbo-Zhoushan port, which is one of the world’s largest container terminals, due to a Covid outbreak.

Gary Grant, founder and executive chairman of toy chain the Entertainer, said the cost of shipping a container from Asia had increased from $1,700 to more than $13,000 (£8,000) over the past year.

But ministers are said to be against relaxing visa requirements in light of 4.7% of the population remaining unemployed, according to the latest figure from the Office of National Statistics.

‘They [retailers] know what the answer is, it’s just expensive,’ a Whitehall source told The Times. ‘There are millions of people unemployed and 90,000 vacancies. They need to pay more and offer training. Government is not going to budge on that.’

‘The shortage of drivers is the key issue,’ she told BBC Radio 4’s Today programme.

‘We’re taking drastic action like buying smaller delivery vehicles because there is going to be increased pressure when schools reopen and people return to their offices.

‘So the office is going to get worse. We would like the government to introduce a temporary visa scheme as a quick fix and then more training to increase the number of drivers in the longer term.’

On Wednesday, it emerged that Greggs has been unable to restock popular products, including its chicken bake, the chargrill chicken oval bite, and several chicken-filled baguettes.

It is the latest national chain, joining McDonald’s, Nando’s, KFC, Beefeater and Subway, to warn customers about shortages of key ingredients and products.

Deliveries of bread, milk and fresh produce to supermarkets and convenience stores have been disrupted, while supplies of canned and bottled drinks are rationed in some areas.

Haulage and retail industry leaders say the UK has a shortage of 90,000-100,000 drivers and they are calling on the government to take urgent action amid fears that crucial Christmas deliveries will be disrupted.

They argue that HGV drivers should be added to a list of essential and skilled workers so people from the EU can be given visas and allowed into the country to keep food on plates.

The managing director of Iceland, Richard Walker, said it is criminal that drivers are not eligible for these visas, yet they are available to visiting ballerinas and concert pianists. 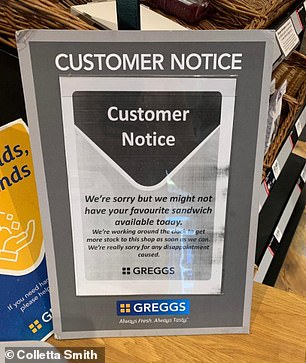 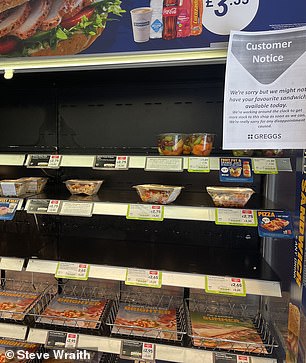 He warned the delivery disruption is ‘impacting the food supply chain on a daily basis’.

Now ONLINE deliveries could be hit amid strike threat

By Isabella Nikolic for MailOnline

Online shopping deliveries from Asos, Argos and other major retailers could be hit after drivers for Yodel and DHL threatened strike action over pay.

A consultative poll of 200 drivers working for DHL saw a 98 per cent vote for industrial action over the offer of a one per cent pay rise.

It will now go to a full ballot of members by the Unite union who recently won a higher pay rise for beer delivery drivers after a threatened strike which was subsequently called off this week.

A nationwide shortage of HGV drivers has put those in the trade in a stronger position when it comes to negotiating new pay deals.

It comes as lorry drivers at delivery giant Yodel are being balloted on whether to take industrial action over pay and conditions. The GMB union said more than 250 of its members will vote in the coming weeks on whether to launch a campaign of action.

He said: ‘Things like bread and other fast moving lines are being cancelled in about 100 stores per day, soft drinks are 50per cent less in terms of volume. So it is having an effect at shelf.’ Mr Walker admitted that some stores are selling out of bread and then struggling to replenish’ the shelves.

‘We have a lot of goods to transport between now and Christmas and a strong supply chain is vital for everyone,’ he said.

‘The reason for sounding the alarm now is that we have already had one Christmas cancelled at the last minute, and I would hate this one to be problematic as well.’ Industry experts say the shortage is the largely the result of a double-whammy of Brexit, which led to thousands of EU drivers going home, and coronavirus. Lockdown hit the training of new drivers and some 40,000 HGV driver tests were cancelled.

Significantly, the average age of a British lorry driver is put at 56=57 and not enough young people have joined the industry against a background of long hours, poor conditions and pay.

Mr Walker told the BBC’s Today programme: ‘I would not say it is not an inevitable consequence of Brexit. It is a self-inflicted wound caused by the government’s failure to appreciate the importance of HGV drivers as skilled workers.

‘On the skilled worker list are ballerinas and concert orchestra musicians, but not HGV lorry drivers – so let’s add them to the list. It’s ‘criminal’ that they are not on the list.’

‘The best and most straightforward solution would be for the industry to bring in skilled drivers from elsewhere,’ he said. 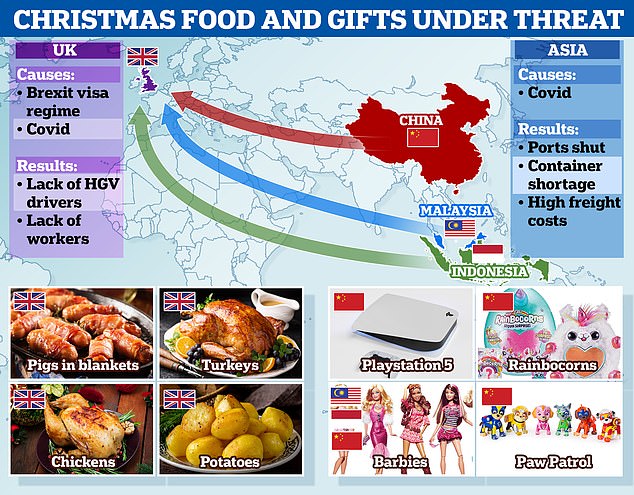 Tesco stores are currently suffering intermittent disruption, but Mr Allan said: ‘There is absolutely no reason for customers of Tesco, or I suspect other chains, to panic buy.’ Looking ahead to Christmas, he said: ‘We are running very hard just to keep on top of existing demand and there isn’t the capacity to build the stocks we would like to see.

‘So in that sense I think there may be some shortages at Christmas. But again I wouldn’t want to over-dramatise the extent to which that would be the case. I think it’s very easy to make a drama out of a modest crisis.’ Steve Murrells, chief executive of the Co-operative Group, said the ongoing food shortages ‘are at a worse level than at any time I have seen’.

He said the disruption has been driven by ‘Brexit and issues caused by Covid’, and the firm is retraining staff as lorry drivers to help fill vacant roles.