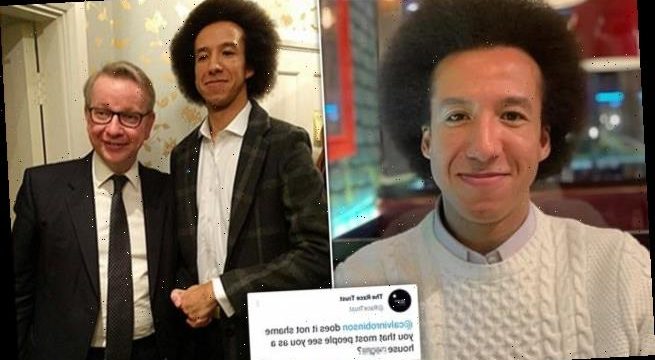 A racial equality charity has been embroiled in a race row after tweeting a vile racist slur at a black Tory commentator.

The Race Trust faced a furious backlash after the post branding mixed-race political pundit Calvin Robinson, who is of Afro-Caribbean descent, a ‘n***o’.

The Race Trust, founded by Aysha Khanom, vows to ‘change the language and understanding of the social construct of race.’

Mr Robinson, who works as a political advisor and commentator, had appeared on BBC’s The Big Questions to discuss race and racism in the UK before a furious row broke out.

Following the heated discussion, a tweet appeared from The Race Trust’s account directed at the pundit which read: ‘Calvin Robinson does it not shame you that most people see you as a house n***o?’ 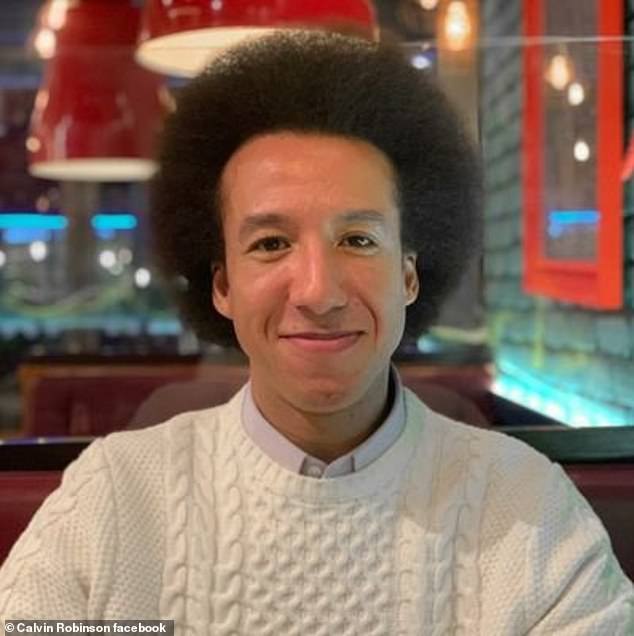 Conservative political advisor and commentator Calvin Robinson, who was branded a ‘house n***o’ by a racial equality charity who tweeted the racial slur at him

The Race Trust faced a furious backlash after the post which branded the mixed-race political pundit, who is of Afro-Caribbean descent, a ‘n***o’

Speaking on the program Sunday, Mr Robinson explained how he personally had seen a rise in vile racist attacks this year from some people who considered his Black identity to be incompatible with his Conservative views.

‘That’s because of Black Lives Matter and critical race theory being pushed. This idea that there’s an appropriate way to be black.

‘For example I have been called bounty, uncle Tom, house n***o for not having the right opinion.’ 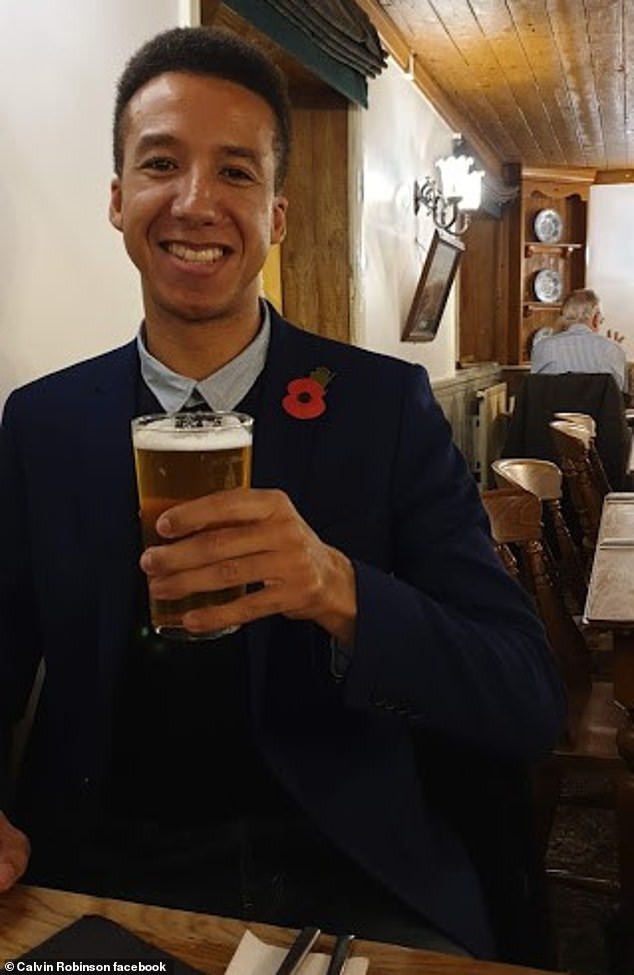 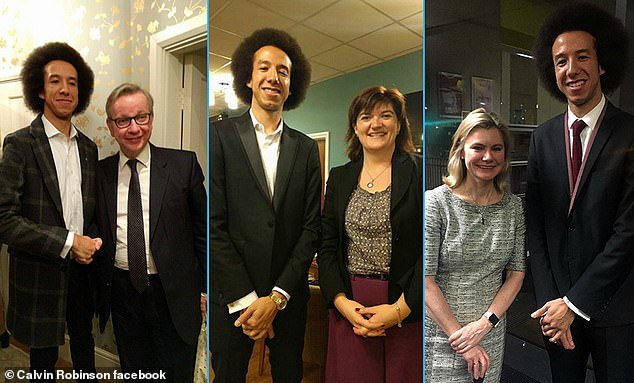 One person wrote: ‘That is a disgusting tweet. As Calvin said on TV yesterday.

‘He experienced more racism and hatred in the last year than he has all his life.

‘These people are trying to divide not unite!!’

One social media user wrote: ‘This insult actually makes my stomach flip. I could weep, I really could.’

The Race Trust’s website claims: ‘We only believe there is only one Human Race.’

Twitter users hit back at the tweet from The Race Trust, writing ‘This insult actually makes my stomach flip’

The Trust’s ‘mission’ section adds: ‘We hope to facilitate and aid schools and organisations in increasing racial literacy of staff and students.

‘We hope to provide young people with the confidence to achieve their potential in the comfort of their own skin.’

Several social media users accused Ms Khanom, who has been dropped from her role as an advisor at Leeds Beckett University following the tweet, of sending the tweet herself.

A spokesperson for The Race Trust said: ‘We have investigated the tweet and subsequently the employee who sent out the tweet is no longer part of our organisation. We accept this was an ill informed tweet and have taken the appropriate steps to deal with it hence the delay in our response.

‘The tweet was deleted when it came to our attention and therefore has been removed and the account has been temporarily removed.

‘This was not posted by Aysha Khanom or the current employees and we do not share the same view as the one post. We have apologised as has Aysha Khanom.’ 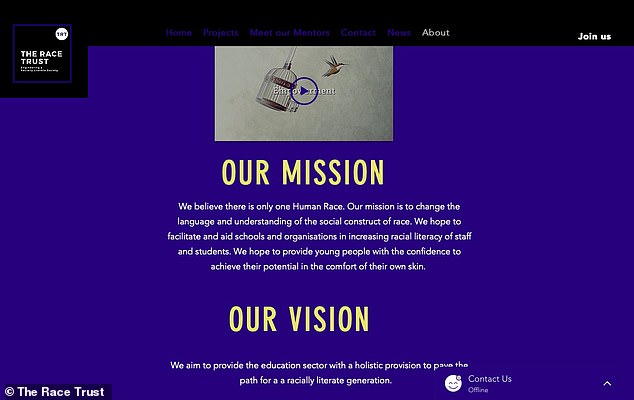 A spokesperson for The Race Trust said: ‘We have investigated the tweet and subsequently the employee who sent out the tweet is no longer part of our organisation.’ 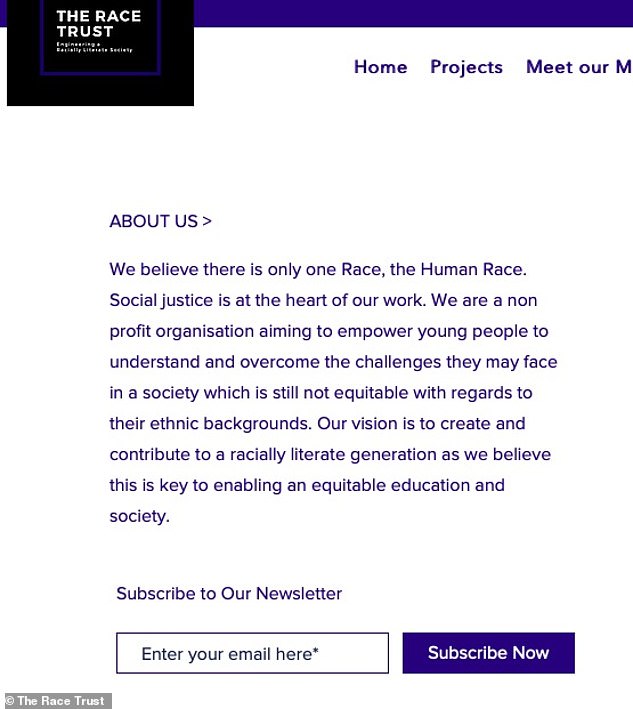 The about page of The Race Trust’s website reads: ‘We believe there is only one Race, the Human Race’

Responding to the slur, Mr Robinson said: ‘There seem to be elements in our society that want to divide us.

‘It’s sad because in this country people have equal opportunities, we can become anything we wish if we work hard and focus.

‘It’s very telling that every time I share a message of unity, these divisive forces attack me for it. Every time I say we’re stronger together, they try harder to split us up.’

A spokesperson for Leeds Beckett University stressed that Ms Khanom has never been employed by them.

The spokesperson said: ‘Aysha Khanom is not an employee of Leeds Beckett University and we have terminated all association with immediate effect.

‘The university strongly condemns the use of racist language.

‘We stand united against racism and in our support for anyone who experiences racism.’