London: The Duke and Duchess of Cambridge are making hearts flutter with a sweet new photo of their daughter Princess Charlotte. 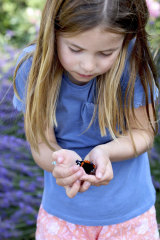 In photo provided by the Duchess of Cambridge, Britain’s Princess Charlotte holds a red admiral butterfly in Norfolk, England, as part of the Big Butterfly Count.Credit:AP

Prince William and Catherine shared a photo on Instagram of Charlotte, 6, in a periwinkle shirt and pink floral shorts gazing at a butterfly while she gently held the insect in her hands.

The photo of the young royal was to spread awareness for the UK’s Big Butterfly Count, a campaign to encourage the public to count the number of butterflies they see in nature to survey the health of the environment.

“We wanted to share these beautiful Peacock and Red Admiral butterflies as part of Big #ButterflyCount initiative taking place across the UK,” the royals captioned the photo. “Butterflies are vital parts of the ecosystem as both pollinators and components of the food chain.”

Charlotte Elizabeth Diana is the middle child and only daughter of Prince William and Duchess Kate. Her younger brother, Prince Louis, turned 3 on April 23, and her older brother, Prince George, turned 8 on July 22.

Royal fans don’t often get to see photos of the Cambridge children outside of their birthdays, Christmas and other important events, but admirers have glimpsed more of the little royals lately.

The last photo of Charlotte was released on her birthday and featured the young princess smiling while dressed in a blue floral, button-front dress with a Peter Pan collar, her long hair worn loose as she look directly into her mother’s camera.

Tradition has dictated the royals release new photos to commemorate family members’ birthdays each year: Will and his wife, Duchess Kate, have previously shared special shots of their three children on each of their birthdays, a custom they started on George’s first birthday. Prince Harry and Duchess Meghan have created an amended version of that tradition since stepping down as senior royals and moving to California.