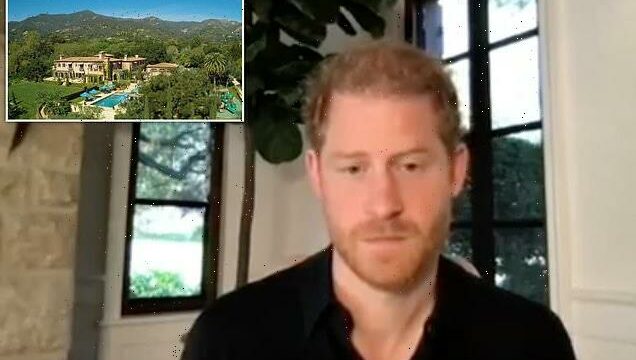 ‘The UK is going through a lot right now’: Prince Harry says struggling Brits ‘want to muck in and help each other’ in WellChild video call…from his $14m Montecito mansion

The Duke of Sussex told nurses and doctors that the UK needs more people like them ‘to step up and help out’ as it is ‘going through a lot right now’.

Speaking to the winners of the 2022 WellChild Awards from the comfort of his $14million Montecito mansion, where he lives with his wife Meghan and their two children Archie and Lilibet, Harry spoke about how struggling Britons ‘want to muck in and help each other’.

‘The UK is going through a lot right now. And it needs people like you to continue to do what you do and to inspire other people to step up and help out where they can,’ he said to the four professional winners of this year’s WellChild Awards.

‘The feeling that I’ve always had, certainly in the UK, is that the general population, everyone gets it, everyone wants to muck in and help each other no matter what.

‘There are certain other fractions that make that tricky for people but the way that I’m constantly inspired every single day is by you guys.

‘You don’t have to do what you do, you choose to so… I’m going to say thank you.’

Prince Harry seemed to be taking the call from his and Meghan’s shared office in their Southern California home, which is home to ‘two plush club chairs placed side by side behind a single desk, facing into the room like thrones,’ according to The Cut. 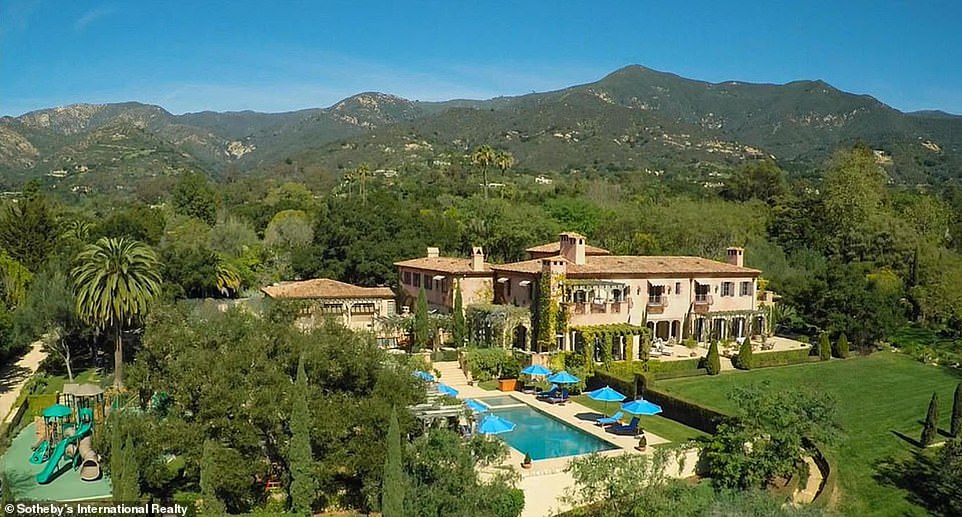 The Duke also shared insights into his family life, including how his family have ‘three emotional support dogs’, during his video call with the winners of the 2022 WellChild Awards, who he said he regretted not having been able to meet in person.

The Sussexes have three dogs, a black Labrador called Pula and rescue beagles Guy and Mia. Describing them, the prince said: ‘Between the three of them they charge around chasing squirrels and causing all sorts of problems for us every day. But they’re also emotional support dogs – 100%! When they’re behaving.’

At one point, Harry appeared visibly moved when told that his late mother Diana, Princess of Wales would have been so proud of him.

During the video chat which was released today, Harry spoke to each of the winners in turn, including Tony Hudgell, who raised £1.7million for the hospital that treated the injuries he sustained following vile abuse at the hands of his birth parents.

Four-year-old Henry Waines from Bridlington, East Riding, who won the inspirational child aged four to seven category, asked the duke: ‘How are Archie and Lilibet doing?’

Harry replied: ‘They’re doing great – Archie is very, very busy and Lili is learning to use her voice, which is great.’ 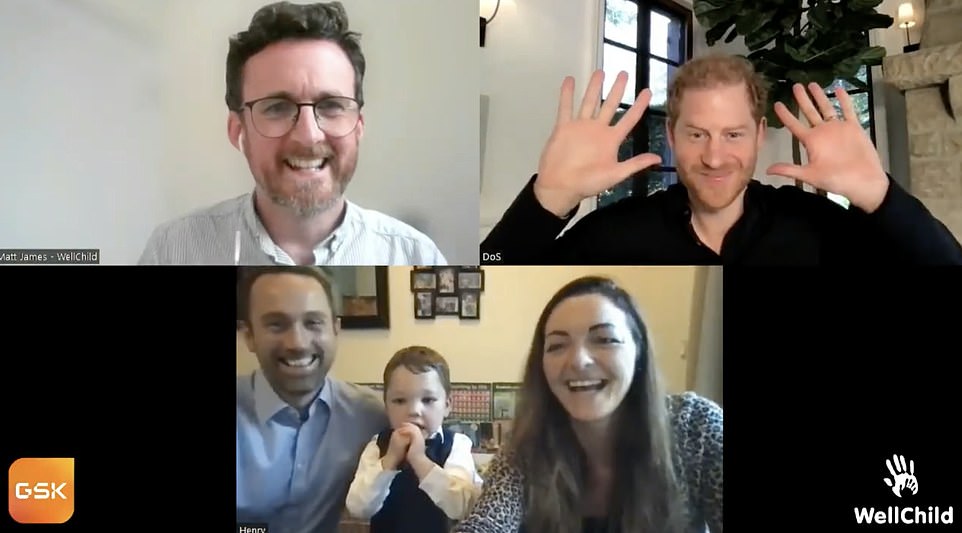 Harry initially spoke to Henry Waines. a four-year-old who was born with serious health problems. He appeared alongside his parents, Ben and Shevonne 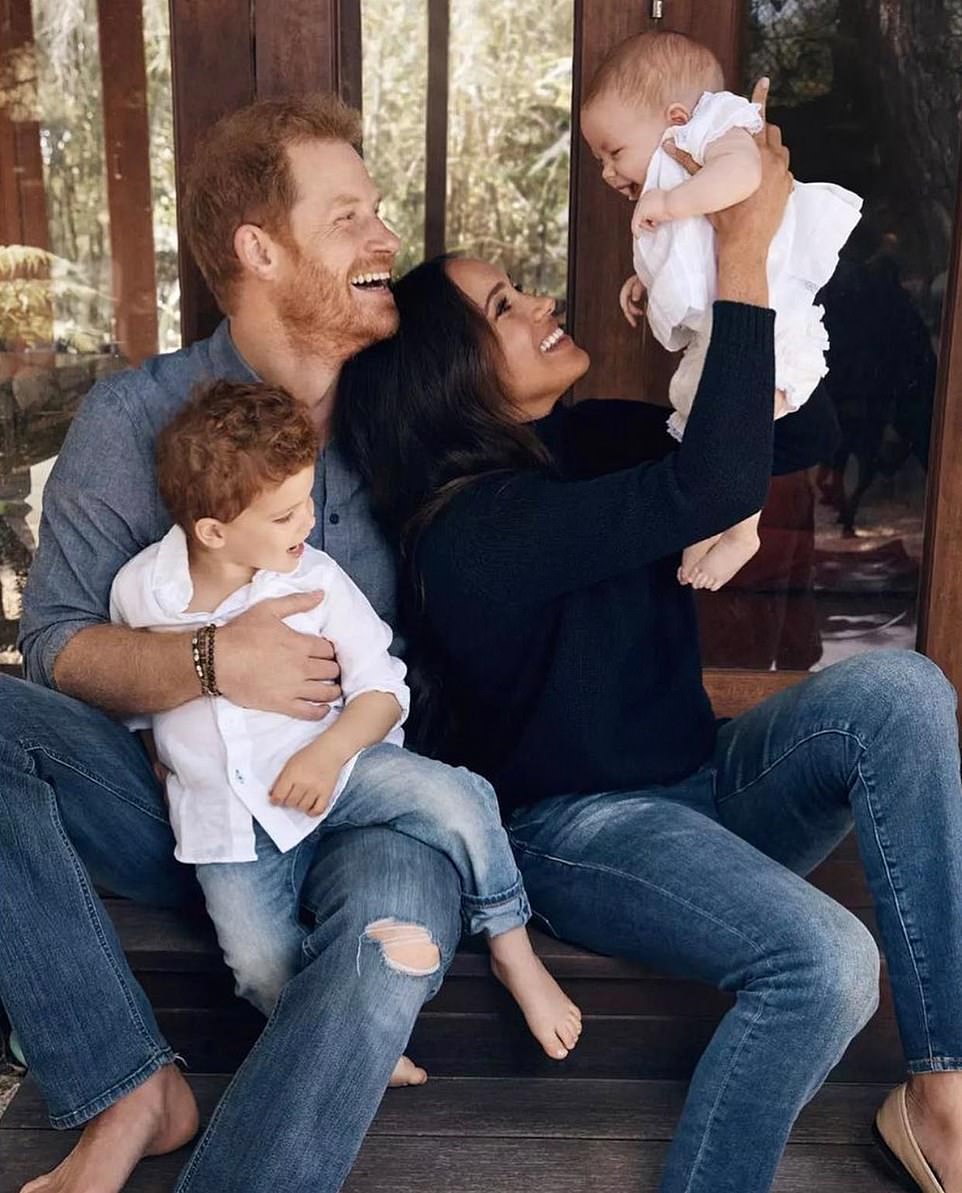 Appearing on a video call from his home in California , the Duke of Sussex also chatted about family life with his wife Meghan and their children, Archie and Lilibet

As the duke chatted to a confident Henry, he told him: ‘You sound just like my son Archie. The same little squeaky voice. I love it.’

The duke told the youngster: ‘My name’s Henry as well. But everyone calls me Harry. I have no idea why.’

When Harry was born he was named Prince Henry of Wales, but palace officials announced that he was to be known as Harry.

His father Charles, now King, once declared this was always the case unless Harry had been ‘very, very naughty’.

Henry’s mother Shevonne told the duke he was actually the inspiration for naming their son.

The duke covered his face with his hands in embarrassment and said: ‘Oh no, don’t say that, and how did that happen?’

Henry was born with serious health problems affecting his ability to breathe, eat and speak, and he is attached to a ventilator 24 hours a day.

He has been praised for his determination to show how well you can live with a tracheostomy, and climbs trees, plays football, and rides a bike without stabilisers, pulling a 12kg trailer containing his ventilator behind him.

Harry also held a video call with 13-year-old Isabelle Delaney, who won the inspirational young person aged 12 to 14 award, and her family, who live in Solihull in the West Midlands. 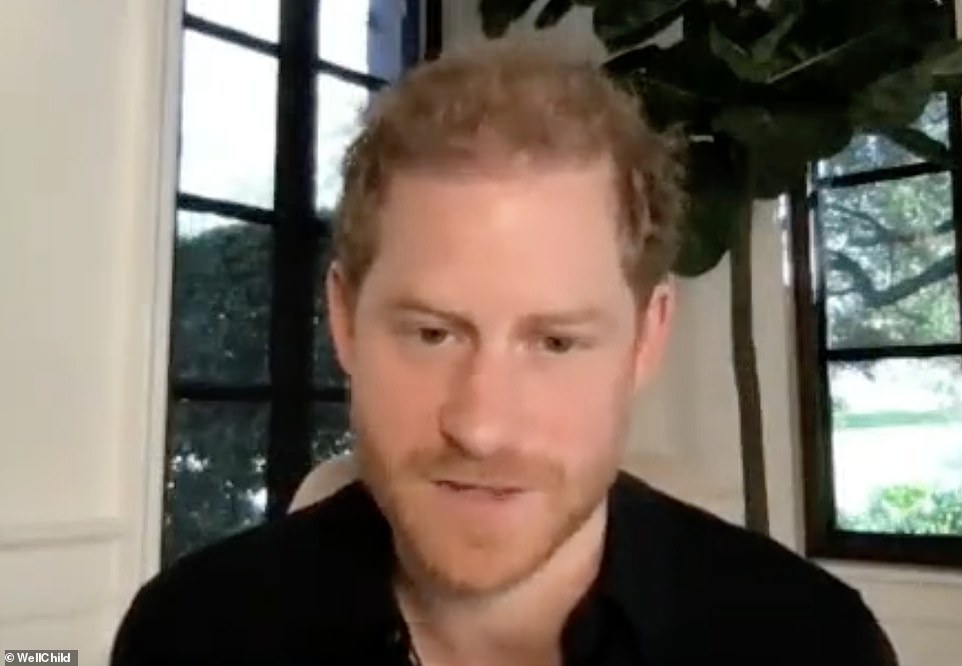 Addressing Henry, the prince said: ‘That is a very, very cool award. You know I was supposed to be the one giving it to you and I was sadly not able to be there. I’m sorry we didn’t get to meet, Henry’ 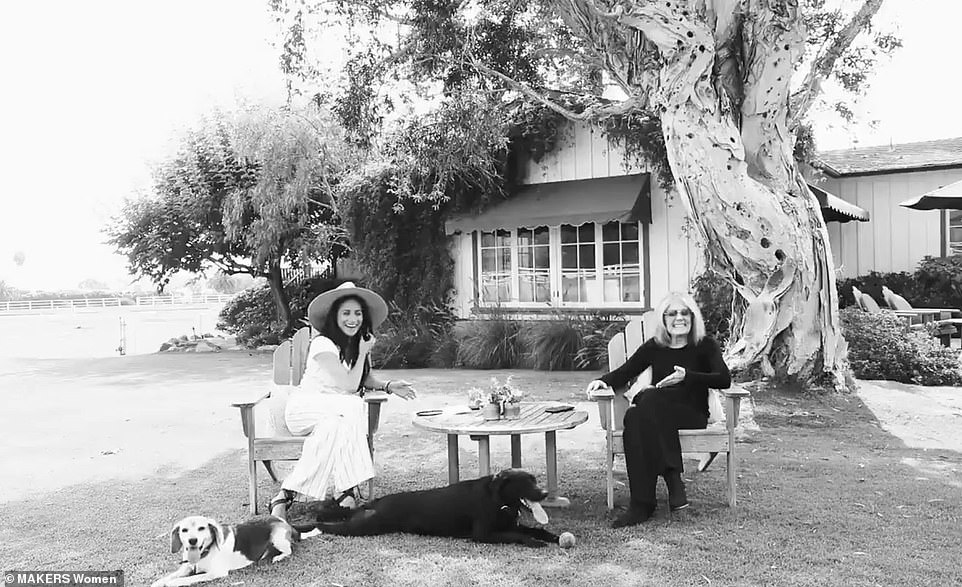 Meghan in 2020 with activist Gloria Steinem (pictured) along with two of her dogs, black Labrador Pula, and rescue beagle Guy

Isabelle, who has a range of serious health conditions including autism, ADHD, hypermobility and Irlen syndrome, was joined on screen by her labradoodle Hope, who is training to be the teenager’s assistance dog.

Harry spoke about his own three dogs – black labrador Pula and two rescue beagles, Guy and Mia – saying they charged around causing mischief every day, and how it was like having five children.

He described them as ’emotional support dogs, 100% – when they’re behaving’.

‘We all need a dog that keeps us calm. I’ve got three in this house now. We basically have five children,’ the duke said.

‘But they are also emotional support dogs, 100% – when they’re behaving.’

The duke also chatted to Tony Hudgell, who won the special recognition four to 11 years award. 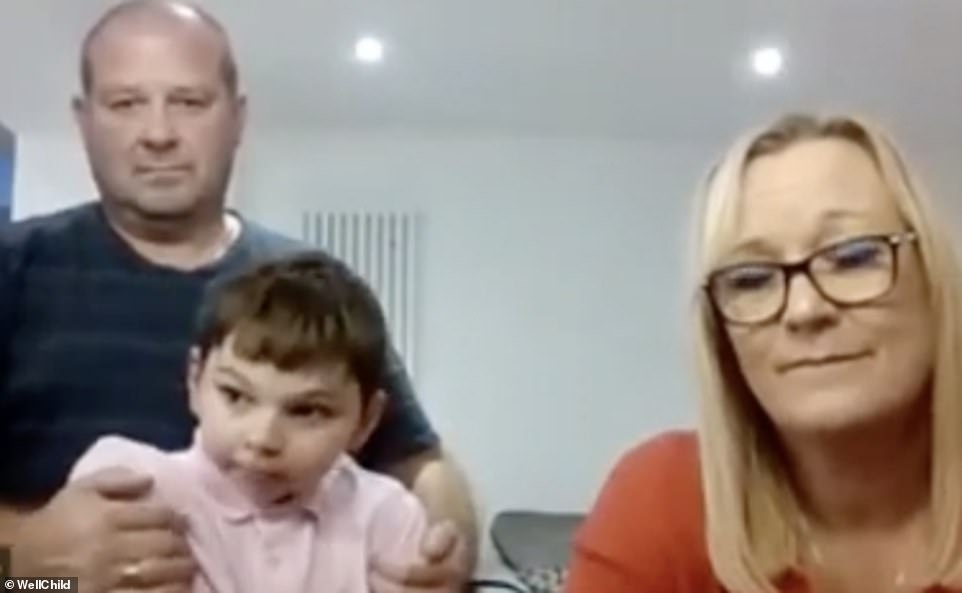 Harry also spoke to seven-year-old Tony Hudgell, who became a household name after raising £1.7million for the hospital that treated the injuries he suffered after being abused as an infant 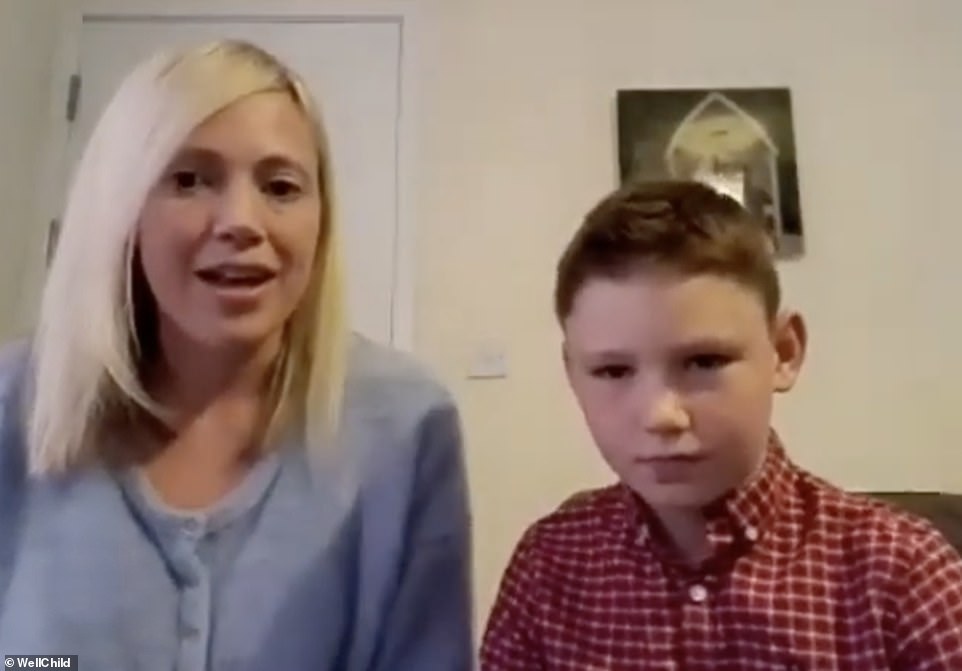 When eight-year-old Harry Byrne joined the call, the Duke told him: ‘You’ve got the coolest name in the house’

Tony, who was so badly abused at the hands of his birth parents that he had to have his legs amputated, raised more than £1.7 million for Evelina Children’s Hospital with his challenge of walking every day of June in 2020 on his new prosthetic legs.

Tony’s adoptive mother and father, Paula and Mark Hudgell, from West Malling in Kent, expressed their condolences to Harry on the death of the Queen, with Paula saying: ‘We felt for you immensely.’

The youngster questioned Harry on what his favourite crisps were. The duke replied: ‘Salt and vinegar – could be Walkers, could be anything as long as it’s salt and vinegar.’

Harry told Tony: ‘I’m thanking you for your resilience, your determination, your bravery, your strength your everything. You seem like a bit of a superhero.’

As well as the winning children and teenagers, Harry also spoke to the professional winners, including senior play specialist Lizzie Penn from Great Ormond Street Hospital, and Evelyn Rodger, a Diana Children’s Nurse with Children’s Hospices Across Scotland. 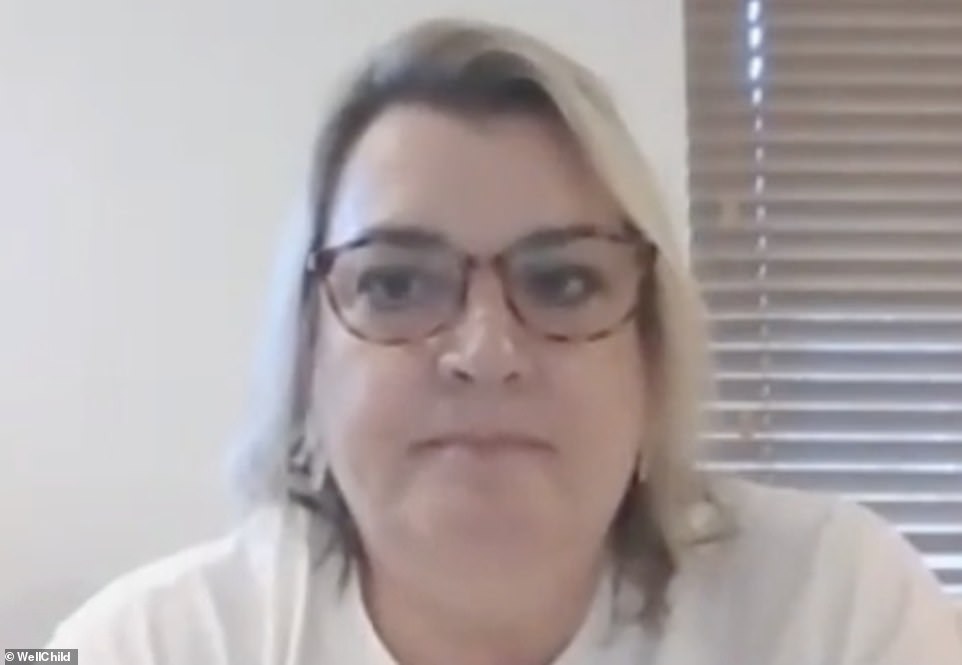 Harry was visibly moved as Evelyn Rodger, a Diana Children’s Nurse with Children’s Hospices Across Scotland, told him how her job had been funded ‘from your mum’s memorial fund’ 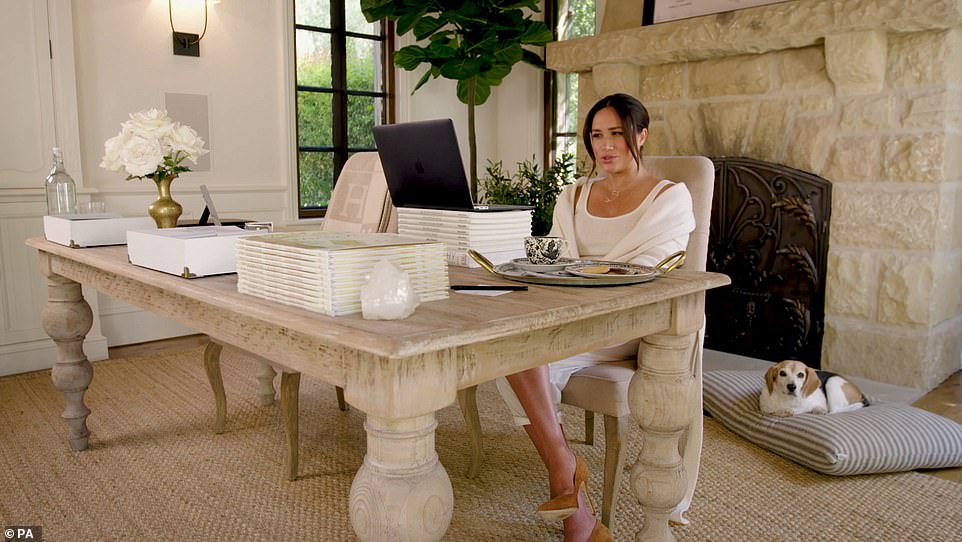 Prince Harry seemed to be taking the call from his and Meghan’s shared office (pictured) in their Southern California home, which is home to ‘two plush club chairs placed side by side behind a single desk, facing into the room like thrones,’ according to The Cut

Ms Rodger’s role was funded by the memorial fund set up in honour of Harry’s late mother, Diana, Princess of Wales.

Who were the WellChild award winners? Inspirational children who were recognised for their achievements

Henry was born with serious health problems affecting his ability to breathe, eat and speak.

He spent the first 15 months of his life in hospital, including nine months on a cardiac intensive care ward, and underwent countless lifesaving operations.

Despite coming home at last, Henry still faces an uncertain future with continuing hospital appointments and procedures to help with his respiratory and digestive systems. 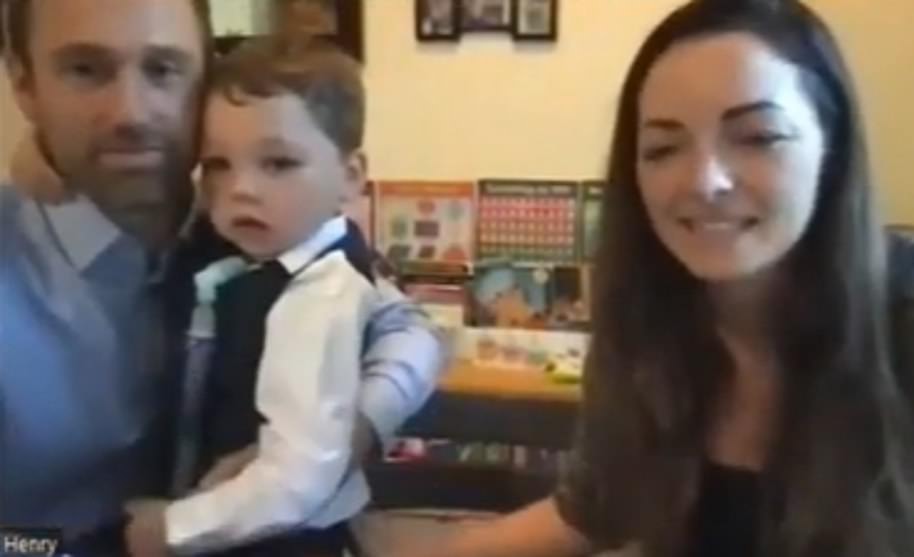 Henry Waines spent the first 15 months of his life in hospital, including nine months on a cardiac intensive care ward, and underwent countless lifesaving operations

He has also helped raise money for Great Ormond Street Hospital and at school he’s flourishing academically and socially.

Shakeerah is the only known living survivor of a rare bacterial brain infection which she picked up when receiving treatment for a brain tumour, just after her first birthday.

After treatment, the 10-year-old was left profoundly deaf and visually impaired and has a feeding tube and tracheostomy.

With her ‘can-do’ attitude Shakeerah is a star at her mainstream school and always takes time to support the charities which helped with her rehabilitation.

She takes everything in her stride, touching the hearts of everyone she meets with her cheeky sense of humour. 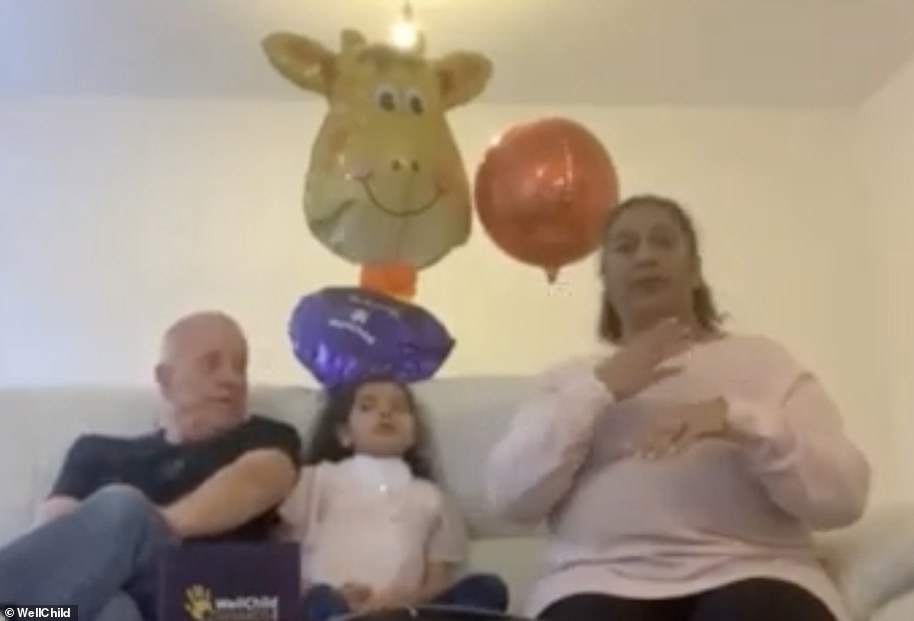 One of Harry’s calls was with 10-year-old Shakeerah Crowther, the only known survivor of a rare bacterial brain infection she picked up during treatment for a brain tumour

Harry looked after his younger brother Reuben who had a very rare brain condition which limited his life span.

The eight-year-old helped his parents with everyday tasks to keep Reuben comfortable and happy, such as entertaining and playing with him in such a way that Reuben felt totally loved and included.

He also did a 45-mile walk to raise awareness of Reuben’s condition and raise funds for the hospices that looked after Reuben and supported the family. 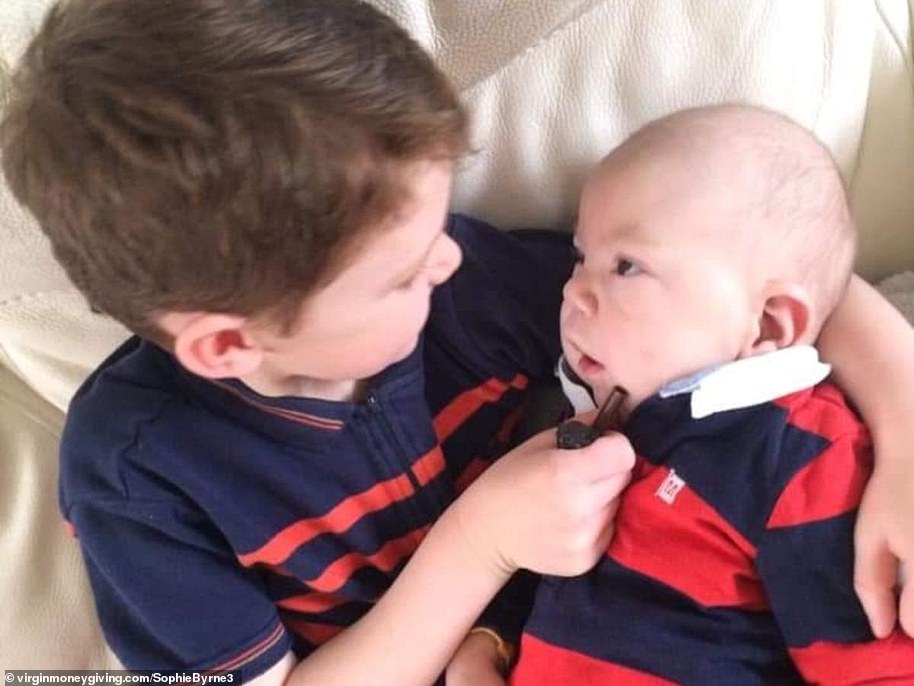 Tony became a household name after raising £1.7million for the hospital that treated the injuries he suffered after being abused as an infant.

Tony uses a wheelchair and last year started to learn to walk on crutches with his new prosthetic legs.

The nation got behind him with a challenge to walk every day of June on his new legs, and he walked 13.5km, raising over £1.7million for Evelina Children’s Hospital. 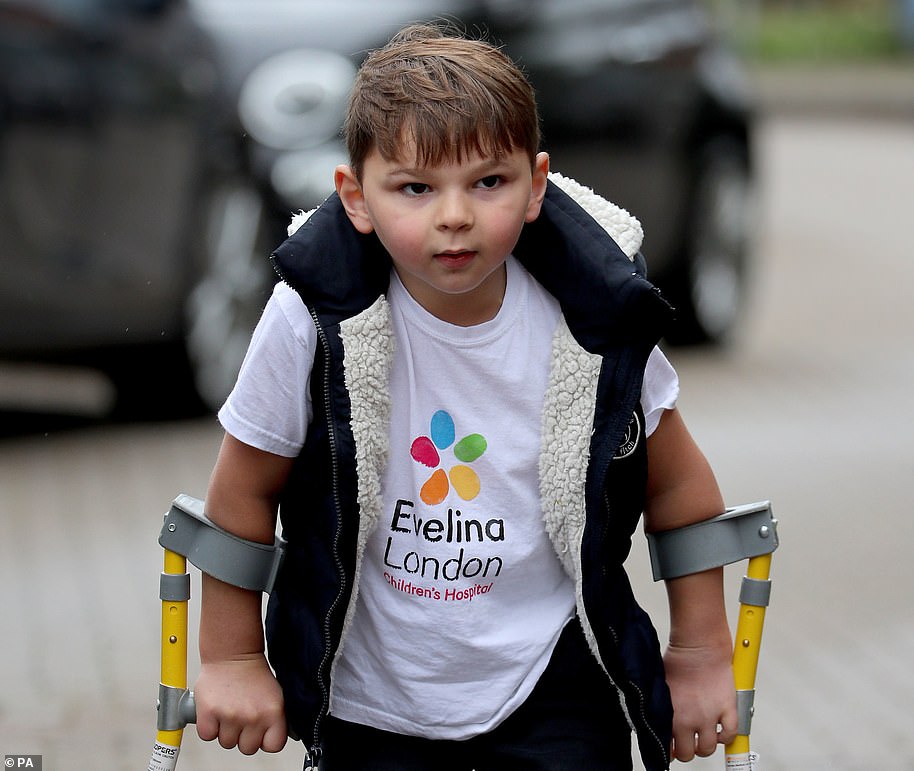 Tony Hudgell contracted sepsis, meaning his legs had to be amputated up to his knees and he now uses prosthetics to walk

Isabelle has a range of serious health conditions including autism, ADHD, hypermobility and Irlen Syndrome, as well as a trauma response to adults and significant anxiety.

The 13-year-old has had a difficult journey through school so far. She suffered bullying in school which had an enormous impact on her mental health.

However, she has worked really hard and displayed amazing perseverance and resilience to start to rebuild her mental health. In July 2021 Isabelle started at a new school and has done amazingly well.

Source: WellChild. Click here for more information and to support the charity.