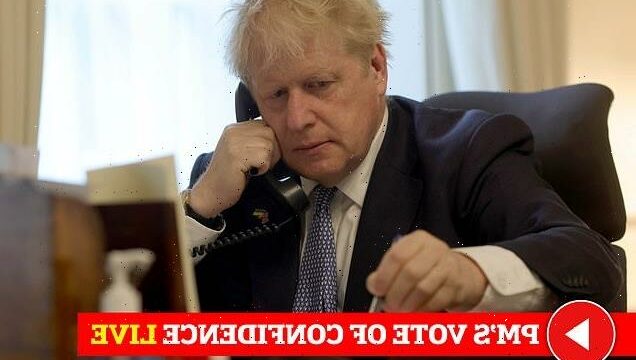 BORIS JOHNSON VOTE OF CONFIDENCE LIVE: Result will be announced after 8pm tonight as Prime Minister fights to cling onto his job – and Jeremy Hunt and John Penrose join revolt

MailOnline’s deputy political editor David Wilcock reports from the Downing Street press briefing today, which saw Boris Johnson’s spokesman talking about how the Prime Minister will ‘not be distracted from the key issues facing the UK’:

Daniel Johnson, editor of TheArticle, writes in today’s Daily Mail: ‘The truth is that these ‘rebels’ don’t even know what they are supposed to be rebelling against.

‘They are a random collection of nobodies and narcissists, plus the usual suspects. This ramshackle rabble of embittered Remainers and disenchanted Red Wall newbies have nothing in common, except of course their burning resentment of Boris Johnson.’

ANDREW PIERCE: Lack of talent among potential replacements for PM

Andrew Pierce writes in today’s Daily Mail that there could be as many as 12 candidates in the first round of a leadership contest to take over from Boris Johnson – but there is a ‘lack of talent among potential replacements’:

What is Boris Johnson doing to fight back against his critics?

Boris Johnson will be unveiling plans to tackle NHS inefficiency and expanding the right to buy social housing this week as he tries to defend himself.

The Prime Minister is trying to make it clear that his Government plans to focus on policies that can win the next election for the Conservatives. Here is the full report from the Daily Mail’s policy editor Daniel Martin:

Conservative MPs have been considering entering Number 10 as Prime Minister for months as Boris Johnson’s backing within the party collapsed as a result of Partygate and other scandals. Here, MailOnline’s deputy political editor David Wilcock looks at who could try to succeed him:

In order to oust Boris Johnson, the Tory rebels will need 180 MPs, and allies of the Prime Minister – including members of the Cabinet – have made clear he is determined to fight to stay on. Here, MailOnline’s home affairs correspondent Rory Tingle looks at the key questions about tonight’s vote:

Boris Johnson is battling to cling on today after the threshold for triggering a Tory confidence vote was dramatically hit – with the Prime Minister’s anti-corruption tsar John Penrose quitting and rival Jeremy Hunt vowing to join the revolt.

Good morning, and welcome to MailOnline’s liveblog on Boris Johnson facing a vote of confidence by Tory MPs this evening.

The Prime Minister was told yesterday that he would face the vote after Sir Graham Brady, the chairman of the backbench 1922 Committee, confirmed he had received the 54 letters from Conservative MPs needed to trigger the ballot.

The vote – by secret ballot – will take place at Westminster this evening between 6pm and 8pm, with the count to take place immediately afterwards. Here, follow MailOnline’s liveblog throughout this afternoon and evening for all the updates.