Thursday's attack on Health Minister Jenny Mikakos by a health union accusing her of "breathtaking incompetence" and demanding her sacking has been dismissed by the powerful nurses union as an internal Labor factional hit.

Health Workers Union secretary Diana Asmar has written to Premier Daniel Andrews calling for the removal of Ms Mikakos over her handling of the COVID-19 pandemic and a dispute over the privatisation of a hospital in Melbourne's south-east.

In her letter, which went public as Ms Mikakos prepared to appear on Thursday morning at the inquiry into the government's ill-fated hotel quarantine inquiry, Ms Asmar accuses the minister of "arrogance and pomposity" and says the HWU will campaign against Labor at the 2022 state election.

But the letter has been met with strong criticism from Victoria's branch of the influential Australian Nursing and Midwifery Federation, which described Ms Mikakos as "a hard-working minister who is across her portfolio".

The nursing union's Victorian branch secretary, Lisa Fitzpatrick, went on to suggest the attack by Ms Asmar, a player in Labor's internal politics, was factionally motivated.

"ANMF does not usually comment on left and right politics, but on this occasion it is concerned that matters unrelated to the health portfolio are at play," Ms Fitzpatrick said. 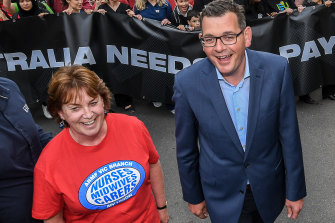 "We remain committed to working with the minister to continue to drive down the impact of the second wave on our members and prevent any third wave of the pandemic."

The HWU's letter was prompted by a meeting between Ms Mikakos and the union on Monday about government plans to call for private bids for the $565 million Frankston Hospital, a move bitterly opposed by unions.

"Leaving aside the issue of privatising non-clinical public health jobs in the middle of a pandemic and a failure to consult … Ms Mikakos failed to answer simple questions," the letter reads.

"She had no understanding of the difference between clinical roles and non-clinical roles within a hospital, nor could she comprehend the details of the PPP proposal. 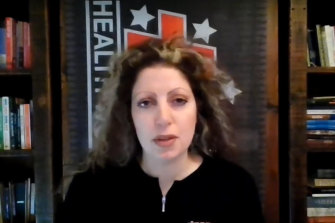 Diana Asmar before the Royal Commission into Aged Care.

The explosive attack came after months of building tension between the minister and the union and sources close to Ms Asmar have told The Age that she had to be persuaded on several occasions over recent months to refrain from publicly attacking Ms Mikakos and the Andrews’ government over its performance in the pandemic.

Labor figures said on Thursday they were taken aback by the personal broadside, but Mr Andrews shrugged off Ms Asmar’s attack.

“I have confidence in all my ministers,” the Premier said.

Ms Mikakos’ cabinet colleagues were privately supportive of the Health Minister, with one cabinet member comparing it to calls from the Rail, Tram and Bus Union calling on Public Transport Minister Melissa Horne to resign.