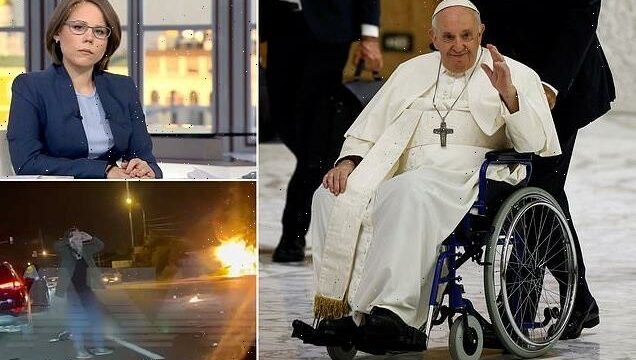 Pope Francis has sparked outrage in Ukraine for referring to Darya Dugina, the daughter of a prominent Russian ultra-nationalist killed by a car bomb near Moscow, as an innocent victim of war.

Ukraine’s ambassador to the Vatican slammed the pontiff in a highly unusual move, saying the comments were ‘disappointing’.

‘Innocents pay for war,’ Francis said earlier at his Wednesday general audience in a sentence where he referred to ‘that poor girl thrown in the air by a bomb under the seat of a car in Moscow’. 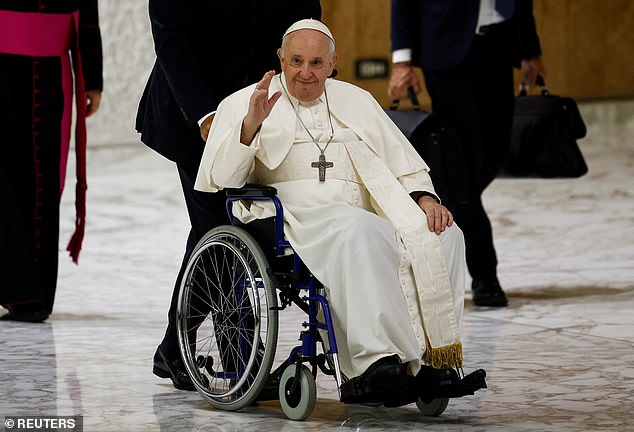 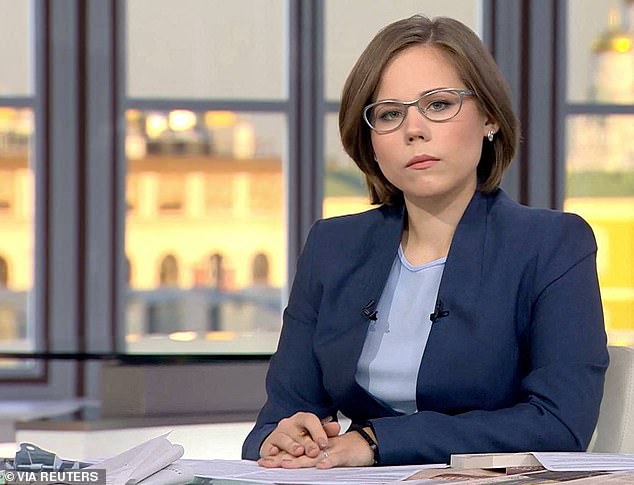 Russia blamed the killing on Ukrainian agents which Kyiv has denied.

Alexander Dugin, Darya’s father, has long advocated the unification of Russian-speaking and other territories in a new Russian empire that would include Ukraine.

Darya Dugina broadly supported her father’s ideas and appeared on state TV in her own right to offer support for Russia’s actions in Ukraine.

In a Tweet, Andrii Yurash, Ukraine’s ambassador to the Holy See, said the pope’s words were ‘disappointing’.

‘How (is it) possible to mention one of ideologists of (Russian) imperialism as innocent victim? She was killed by Russians,’ he said.

Francis called the war ‘madness’. He said Ukrainian and Russian children had been killed and that ‘being an orphan knows no nationality’.

In his Tweet, Yurash said: ‘Can’t speak in same categories about aggressor and victim, rapist and raped’.

The Vatican did not immediately respond to Yurash’s comments. 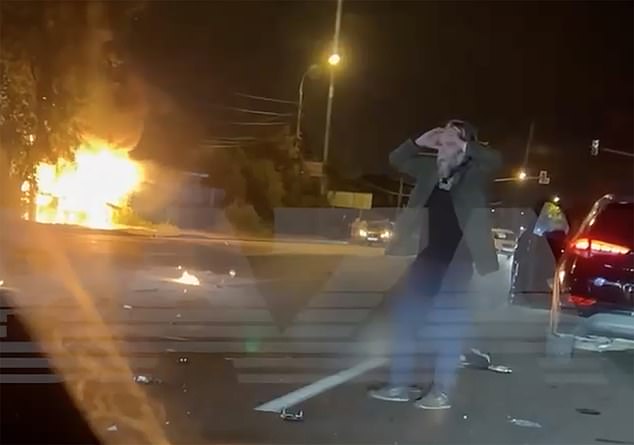 In another part of his address, Pope Francis, called for ‘concrete steps’ to end the war in Ukraine and avert the risk of a nuclear disaster at the Zaporizhzhia power plant.

Dugina died in an explosion on a motorway near the village of Bolshiye Vyazyomy just outside the capital on Saturday night.

The Kremlin quickly announced the culprit behind the bombing as 43-year-old Ukrainian mother and alleged spy Natalia Shaban-Vovk.

But Ukrainian and Western officials, as well as a number of prominent Russian commentators, believe the car bomb was likely executed by agents loyal to Putin after Dugin criticised the Russian president in a public Telegram post.

Hundreds of people yesterday attended Dugina’s funeral service in a large television studio in Moscow, where she worked as a prominent pro-Kremlin broadcaster.

A huge portrait of Dugina, 29, hung above her coffin which was heavily guarded and surrounded by flower wreaths and streamers bearing the colours of the Russian Federation. 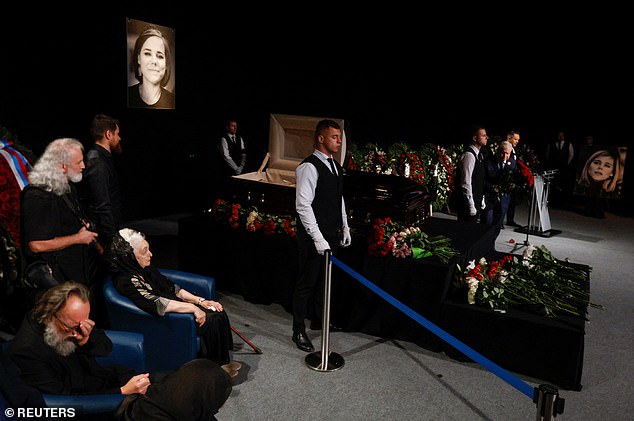 Russian political scientist and ideologue Alexander Dugin (bottom left) mourns for his daughter Darya Dugina, who was killed in a car bomb attack, during a memorial service in Moscow, Russia August 23, 2022

The message from Putin read: ‘Accept my sincere condolences and words of support due to the hardest, irreplaceable loss you suffered.

‘A journalist, a scientist, a philosopher, a military correspondent, she honestly served the people, the Fatherland, and proved with her life what it means to be a patriot of Russia.

‘The memory of Darya Dugina will be forever kept by her close people and friends, her comrades.

‘Wishing you strength and fortitude in this mournful hour,’ the message concluded.

Dugin was later pictured sobbing into his hands on stage as Dugina’s mother stood by her coffin to pay her final respects. 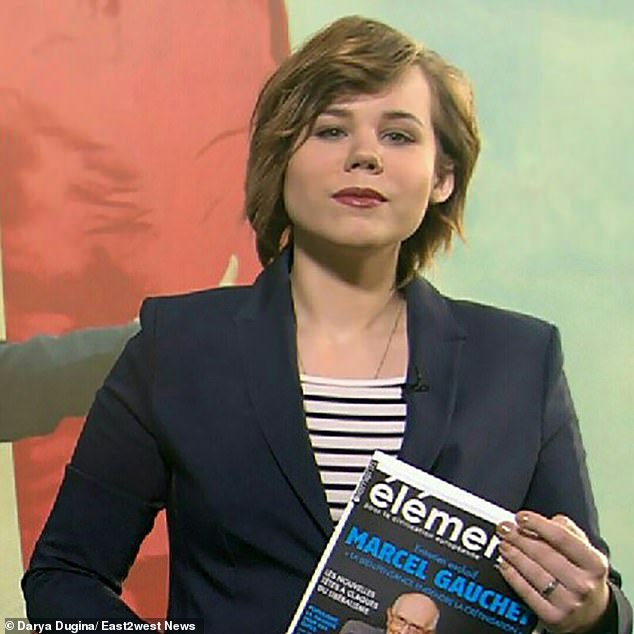 Darya Dugina, a sanctioned Russian nationalist whose father Alexander Dugin is a notorious fascist dubbed ‘Putin’s brain’, died in an explosion on a motorway near the village of Bolshiye Vyazyomy just outside the capital on Saturday night 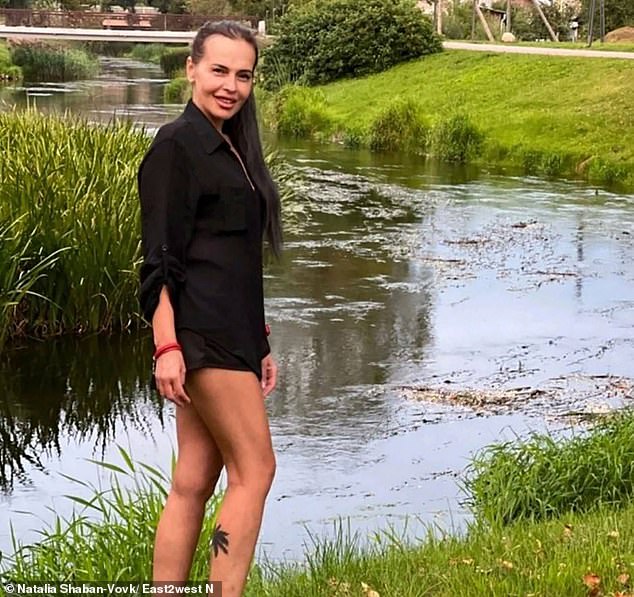 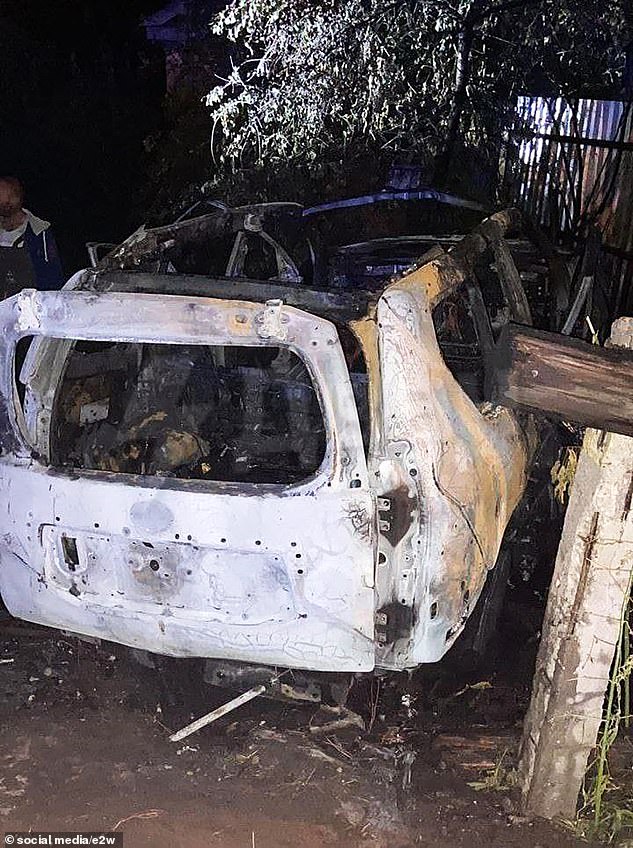 Dugin, a bearded Rasputin-esque figure who some believe may have been the intended target of the bombing, sat forlornly alongside Dugina’s mother at the funeral.

When the moment came for him to deliver a speech, he told funeral-goers: ‘I wanted to raise my daughter the way I see an ideal human, so first of all it was about belief.

She spent her entire childhood in Orthodox camps. But I also wanted her to be a smart Orthodox person, so with her mother we advised her to become a philosopher, and she became one.

‘She died for Russia, on the front line… She lived for victory, and died in the name of victory.’

WHO IS ALEXANDER DUGIN?

Russian ultra-right ideologue Alexander Dugin is responsible for shaping the world view of Putin’s inner circle. He has called for Ukrainians to be killed and strongly pushed Russia to invade for decades.

In his youth, Dugin emerged as a leader of the notorious anti-Semitic Russian nationalist organisation, Pamyat.

He founded his own publishing house after the fall of the USSR, going on to win university positions for his writings.

Dugin believes that the Russian Orthodox Church was destined to rule as an empire over all of Europe and Asia — uniting all the Russian-speaking peoples into a single state.

He laid out his plan for achieving this aim in his 1997 book Foundations of Geopolitics, a text which still has significant influence within Russian elites and has even been used as a textbook by the Russian military.

The Russian professor formed the ‘Eurasia Party’ in 2001, named after the hypothetical state, which also appears in George Orwell’s novel 1984.

His novel calls for a Russian empire stretching from Dublin to Vladivostok, even calling for parts of China to be conquered.

Dugin was dismissed from his position as head of the Department of Sociology of International Relations at Moscow University after arguing for ‘people’s republics’ on the territory of Ukraine.

Dugin called for the annexation of Crimea as far back as 2008, during Russia’s war with Georgia.

He travelled to the disputed region of South Ossetia, where he was photographed with a rocket launcher.

He was also involved with coordinating separatist movements in Ukraine during the 2014 occupation, for which the US sanctioned him.

The political scientist claims he also played a key role in reconciling the relationship between Russia and Turkey in 2015 after a Russian warplane was shot down on the Syrian border.

Dugin also developed links with far-right and far-left political parties in the European Union, attempting to influence EU policy on Ukraine and Russia.

Russian authorities pinned the assassination on alleged Ukrainian spy Shaban-Vovk, who they say sneaked into Russia – bringing her 12-year-old daughter with her – and tracked Dugina for weeks before activating the deadly car bomb and fleeing into Estonia, all without being caught.

The chain of events leading up to Dugina’s death as presented by Russia’s security service included Shaban-Vovk changing her appearance and vehicle number plates to hoodwink guards before fleeing from Russia across the Estonian border.

The FSB also released what it claimed was the Ukrainian mother’s military documents, including a passport-style photo of her.

But commentators questioned why Shaban-Vovk, if she is indeed a Ukrainian spy responsible for the killing, would leave her military identification behind and accused Russian authorities of producing a fake to pin the assassination on Ukraine.

‘We regard this as one instance of provocation in a very long line of provocations by the Russian Federation, and we have nothing more to say about it at the moment,’ said the minister, adding Russia had made no request to extradite the alleged killer.

The head of the International Centre for Defence and Security (ICDS) in the Estonian capital Tallinn, Indrek Kannik, claimed that Dugina had far more likely been killed by an internal Russian operation.

‘It is possible that this was the FSB’s own operation, since these people had become a threat.

‘At the same time, it is convenient to blame it on the Ukrainians. Now we are seeing that Estonia can also be dragged in to this.’

Ukraine has strongly denied any role in the killing in Moscow, accusing the Kremlin of a ‘false flag’ operation to blame Kyiv.

Meanwhile, respected Russian expert Andrei Piontkovsky said the murder of Dugina was professional, indicating that the Russian secret services are likely involved, while Russian-American historian Dr. Yuri Felshtinsky claimed the attack would have been authorised by the Kremlin.

‘The blowing up of the car of the famous Russian fascist and ideologist of the Putin regime, Alexander Dugin, was organised, it seems, by the Russian security services,’ said Felshtinsky, author of ‘Blowing up Ukraine’.

‘On the latest Russian reports, the bomb was attached to Dugin’s car inside his guarded compound. Ukraine focuses on military targets, unlike Russia, and there is no discernible gain in attacking one of Putin’s media puppets or allocating scarce operatives inside the Russian Federation to such a goal that is meaningless to the liberation of Ukraine.

‘The Kremlin will, however, likely exploit it to make it seem as if Ukraine is stooping to its own tactics of bombing harmless civilians in Ukraine.’

Kremlin-linked media posted what they said is Natalia Shaban-Vovk’s ID card, but commentators quickly questioned why the Ukrainian mother would leave behind such a valuable document and accused Russian authorities of an obvious fake 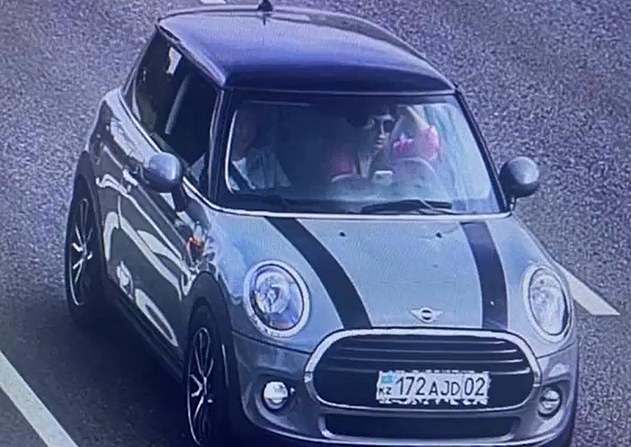 According to the FSB’s case file, Shaban-Vovk tailed Dugina in a Mini Cooper (pictured) for weeks and changed the car’s 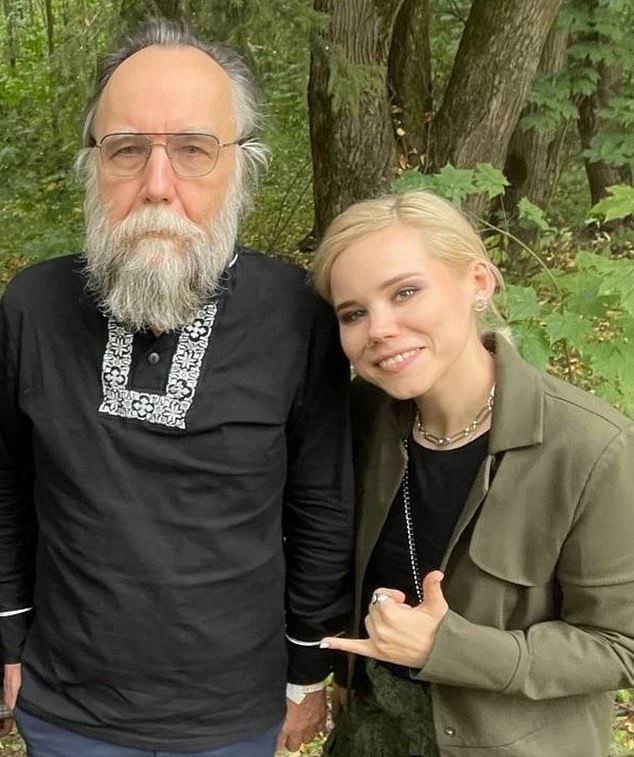 Dugina (right), whose father Alexander Dugin (left) is a notorious ultranationalist, died in an explosion on a motorway near the village of Bolshiye Vyazyomy just outside the capital on Saturday night 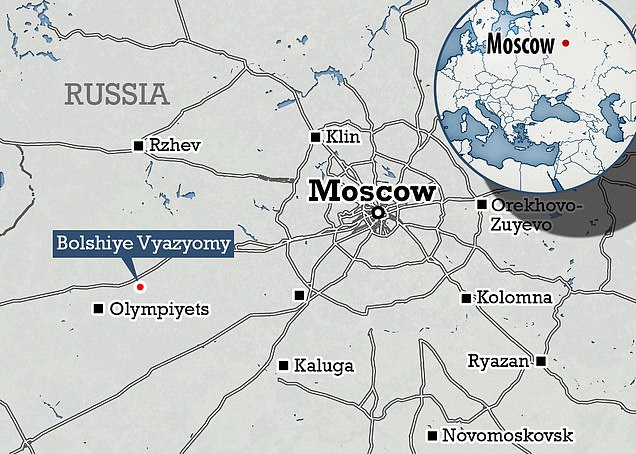 The car bombing took place in Bolshiye Vyazyomy, on the outskirts of Moscow

Seven hours before the assassination on Saturday night, Dugin had issued a vitriolic online post on Telegram saying that the war in Ukraine was now more important than Putin’s presidency.

Dugin had claimed the war and ‘desperate resistance of the Atlanto-Nazi regime in Kyiv’ demands from Russia ‘internal transformations’.

The tone was strongly critical of Putin.

‘The Supreme Commander-in-Chief [Putin] said that we haven’t really started anything yet. Now we have to start. Whether you want it or not, we’ll have to,’ the post read.

‘Now the question is not whether the government wants or does not want change. Such changes are simply inevitable… The mighty forces of history have come into play, the tectonic plates have shifted. Let the old regime bury its dead.

‘A new Russian time is coming. And it’s coming irreversibly.’

Most international observers remain convinced the assassination was actually carried out by Russian agents who wanted to silence the victim’s father.

Analyst Yekaterina Shulman says the outpouring of anger among pro-Kremlin commentators in response to the car bomb attack appears suspicious: ‘The reaction… was immediate. It looks as if they were waiting for something like this to happen.’

Shulman added the killing ‘could possibly be used to ramp up some public outrage in the country to justify even more active repressive actions by the state’.