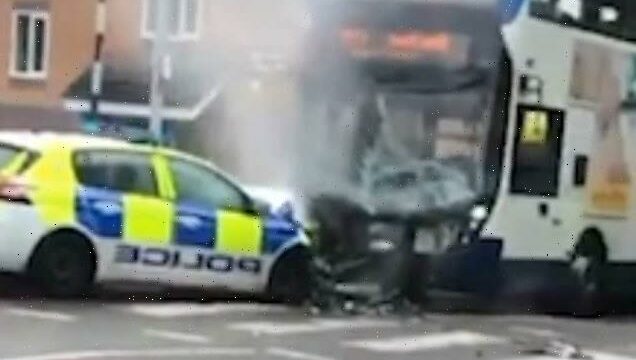 A female police officer has been taken to hospital after a squad car crashed into a double-decker bus while responding to an emergency in Manchester on Monday.

Dramatic video footage taken from the scene appeared to show that a police car from Greater Manchester Police had collided head-on with the Stagecoach bus.

The bus operator announced shortly after 4pm that diversions were in place along Rochdale Road in both directions for numerous services, that later resumed.

Several police vehicles were pictured at the scene, as the section of Fernclough Road was cordoned off by officers in both areas. Clouds of thick smoke could also be seen, with the front of both vehicles visibly damaged.

Having been separated from the bus, the front of the police vehicle was shown crumpled. The windscreen of the double-decker was smashed.

The driver of the bus and its passengers were reportedly uninjured, despite witnesses describing the police car colliding head-on with the bus at high speeds. 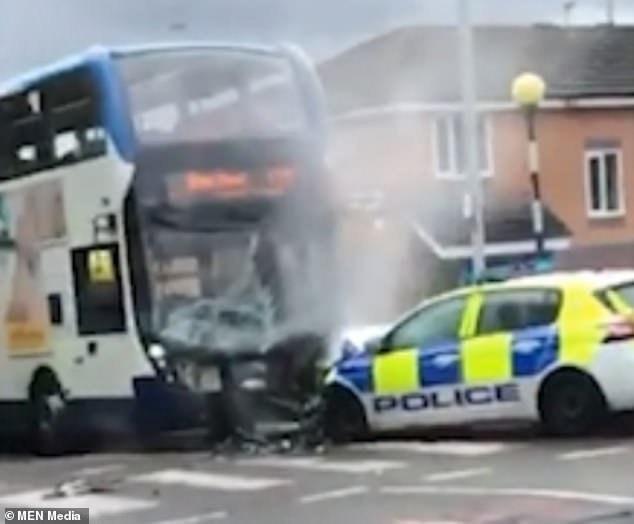 Further details about the incident have not yet been confirmed, but the North West Ambulance Service, GMP and the Greater Manchester Fire and Rescue Service have all been approached for further information, as have bus provider Stagecoach.

A spokesperson from Greater Manchester Police said: ‘This is a collision between a car – a police vehicle – and a bus on Fernclough Road in Manchester.

‘Report came through to us just after 3.10pm. Emergency services attended and a woman, an officer, received minor injuries and was taken to hospital. Both vehicles are being recovered.’

A spokesperson for Greater Manchester Fire and Rescue Service (GMFRS) said: ‘At around 3:20pm this afternoon (Monday May 30), two fire engines from Blackley and Philips Park fire stations attended a road traffic collision on Fernclough Road, Harpurhey, involving a bus and a police car.

‘Firefighters used one hose reel and a thermal scanner to make the vehicles safe, and nine people were assessed at the scene by colleagues from North West Ambulance Service. GMFRS crews were at the scene for around half an hour.’

Greater Manchester Police later said that the officer was responding to a ‘Grade One’ emergency when the collision happened. 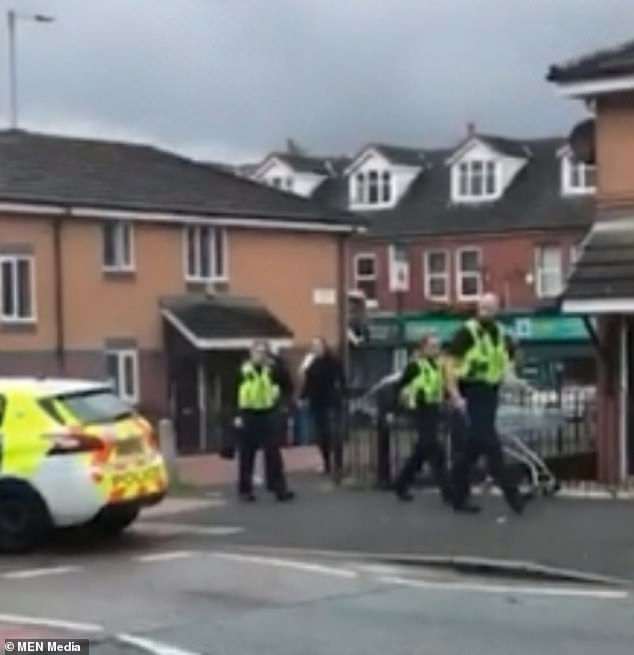 Pictured: Police officers are seen at the scene of the crash on Monday, which saw a police patrol car crash head-on into a double decker bus

Ramazani Mwamba, a reporter for the Manchester Evening News at the scene, wrote on Twitter that witnesses said the sound of the crash was ‘horrible’ and very loud.

One witness described the police car as being ‘basically inside the bus’, Mwamba said. Other witnesses said they saw an elderly man and a young child being freed.

Another witness told Mwamba that the police woman jumped out of the vehicle and was ‘crying’ in shock over the crash, while another told the reporter that the police car was travelling around a bend at ’90 or something’.

The scene was reported to have been cleared at around 7pm on Monday.