An independent authority is required to overhaul the ACT’s youth justice system as it prepares to raise the age of criminal responsibility, according to a report that highlights the challenges facing other states, including NSW.

In Australia, children as young as 10 can be held criminally responsible for their actions and jailed, and talks between the nation’s attorneys-general to raise the age to the United Nations’ recommended 14 have stalled. 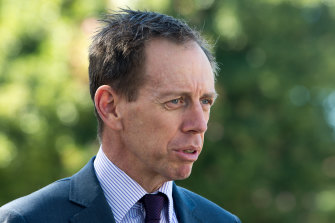 ACT Attorney-General Shane Rattenbury said his government is committed to raising the age children can be jailed from 10 to 14. Credit:Elesa Kurtz.

The ACT is the only jurisdiction that has committed to raising the age to 14, with legislation expected to be introduced to parliament next year.

An independent review into the state of the youth justice system, led by emeritus professor Morag McArthur in partnership with Aboriginal consultancy firm Curijo, has found several problems with the accessibility of preventative services, the sector’s workforce, a shortage of crisis accommodation, and a lack of trauma-informed care for children.

It also warned that Aboriginal and Torres Strait Islander people should play a key role in shaping any response, given their over-representation in the criminal justice system.

“This review doesn’t deter us from the challenge ahead, though. In fact, now we know how to make it happen. We know the importance of this reform and we remain committed to raising the minimum age of criminal responsibility,” said ACT Attorney-General Shane Rattenbury.

According to the report limited early intervention programs for young children, particularly Indigenous children, were of particular concern.

"Almost all stakeholders raised the issue of how difficult it is for children to access mental health, disability and alcohol and other drug services, identifying long waiting lists or narrow eligibility criteria for specialised services," it said.

The report also found that schools could work better with prevention services to make sure young children stay engaged at school, and that short-term funding arrangements promote a culture of job insecurity and a lack of career progression opportunities for support workers.

“In the absence of systems reform, the legislative change is likely to result in failure to meet children’s needs, but also to drive an increase in reporting to child protection services and – ultimately – to more children entering the justice system at the age of 14,” the report warned.

To implement broad changes to the youth justice system, the report said an independent authority would be needed to support reforms and help different government departments work together to better support children and families. It also recommended the creation of a Children’s Wellbeing and Safety Framework to guide policy across the entire public sector.

The NSW government has not committed to raising the age, but has previously said it would consider a review written for the nation’s attorneys-general. NSW Attorney-General Mark Speakman has previously told The Sydney Morning Herald that any reforms would need to ensure there were adequate services in place for children who offend.

While the ACTs report only looks at its own youth justice system, its concerns over the need to fix service delivery gaps could serve as a warning to other states such as NSW.

Australia this year defied the calls of 31 United Nations members to raise the age of criminal responsibility to 14 nationally.