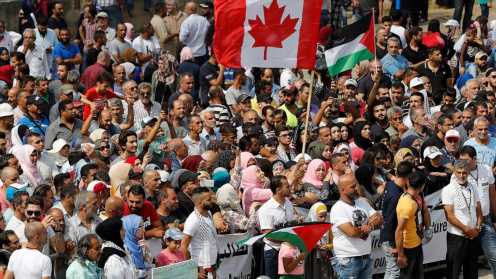 Waving Palestinian and Canadian flags, hundreds of Palestinian refugees gathered outside the Canadian Embassy in Beirut on Thursday requesting asylum in the North American country.

Many among the group lamented the deteriorating economic and living conditions in Lebanon, which is going through a severe economic crisis, and said they wanted a more dignified life.

There are tens of thousands of Palestinian refugees and their descendants in Lebanon. Most of them live in squalid camps with no access to public services, limited employment opportunities and no rights to ownership.

“We want to immigrate, we want to go to Canada for a better life. There is no work or money or anything here. I got a stroke and did open heart surgery, no one helped me,” said Haneya Mohammed, one of the protesters.

The periodic protests outside the embassy on the coastal highway north of Beirut began a few weeks ago, after a crackdown on undocumented foreign labor by Lebanese authorities, triggering protests inside some of the 12 camps spread across the country and in Beirut.

The protesters gathered Thursday also decried what they say is widespread corruption at the United Nations agency for Palestinian refugees, or UNRWA.

They held banners that read: “We want to live with dignity” and “We demand humanitarian asylum” in Arabic and English.

The U.N. Relief and Works Agency, known as UNRWA, is dealing with a budget crunch after an unprecedented loss of all funding from the United States, its largest donor.