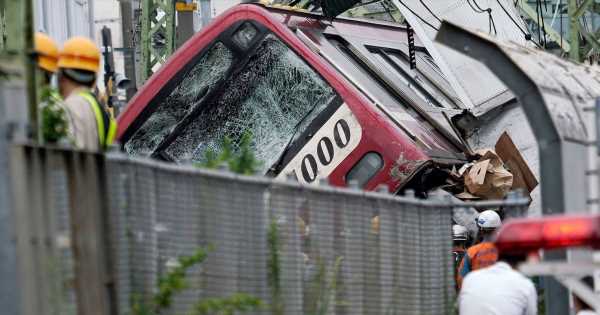 A man has died and 33 others were injured after a lorry ploughed into a train in Yokohama, Japan.

The collision set the truck on fire and derailed nearly half the train.

The lorry driver, a man in his 60s, was critically injured, the fire service said.

The accident on the rail link to the capital, Tokyo, smashed the glass in the driver's compartment and derailed at least the first three carriages of the eight-carriage train, video images showed.

"The sound of glass breaking was incredible," one passenger told national broadcaster NHK.

"By the time I knew what had happened, the carriage was all smashed up."

The accident, which halted trains stopped on the commuter link run by Keikyu Corp, took place near a station used by more than 19,000 people every day, the train operator said.

There was no word on when services might resume.

Authorities, including the transport ministry, said they were investigating the cause of the accident but were unable to provide further details.

Police confirmed a collision between a vehicle and the train, but could not elaborate, citing the investigation.