Federal Treasurer Josh Frydenberg has hit back against suggestions financial support for Victoria is being treated like ‘foreign aid’, blaming the state government for not including construction in their business support agreement.

Friction has again built between the Victorian government and the Commonwealth, with Premier Daniel Andrews again accusing his federal counterparts of preferential treatment for NSW when it comes to financial assistance for the building sector. 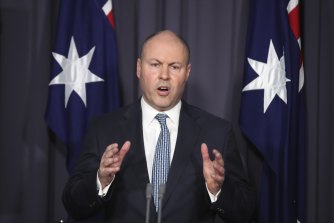 Mr Frydenberg said earlier in the week he had knocked back a request by his Victorian counterpart for special financial assistance for the state’s building industry, following its shutdown.

“Victorians are getting sick and tired of every time the Commonwealth government spends $1 in Victoria, it’s treated like it’s foreign aid, like we should bow our heads and be grateful,” Mr Andrews said on Thursday.

“I’m disappointed that the [federal] Treasurer has indicated that Victoria won’t be getting what NSW got.”

But federal Treasurer Josh Frydenberg said on Friday he was “not going to take the bait” and give the Victorian government the “distraction” they were looking for.

He said Victoria chose not to include the construction industry in their initial agreement with the federal government for business support payments, and there was “no special deal” made with NSW.

“In New South Wales, they chose to put construction in their business support payments that we went 50-50 with,” he told 3AW Mornings.

He said the New South Wales government had provided additional financial support on top of what the Commonwealth had provided, and that was “an option that’s available now to the Victorian government”, on top of the disaster support payments available to workers.

Late on Monday, the Victorian government announced it would shutter the construction industry for two weeks, citing increased COVID-19 transmission at worksites and a lack of compliance from building businesses.

Mr Frydenberg said fully vaccinated tradespeople who didn’t attend this week’s anti-lockdown protests in the Melbourne CBD would now be wondering why they had been shut down, which he called a “genuine question only the state government can answer”.