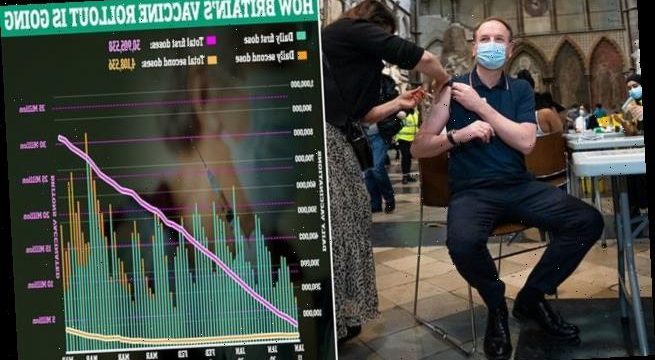 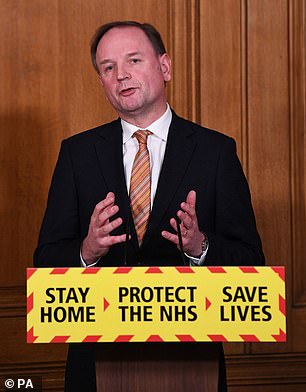 The boss of the NHS has urged all over-50s and younger people with health conditions who have yet to get their Covid vaccine to book an appointment now.

During April the NHS will focus on second doses but appointments for all over-50s not yet protected will also be available.

The most up-to-date NHS England data showed that at least 4million vulnerable people were still yet to get jabbed across the nation.

NHS chief executive Sir Simon Stevens said: ‘We’re well on track to meet our April 15 goal of offering NHS Covid vaccination to everyone aged 50 and over, as well as other high risk groups.

‘In just the past two weeks, we’ve now jabbed nearly 85 per cent of people aged 50-54, and over three million of the highest risk people have also now had their top-up second dose.’

NHS medical director, Professor Stephen Powis, added: ‘Our fantastic staff, helped by local organisations and volunteers, have done everything in their power to jab millions of people at speed – an incredible achievement.

‘As we start to see signs of normal life returning – seeing family or friends outdoors – protecting those most at risk is even more important. 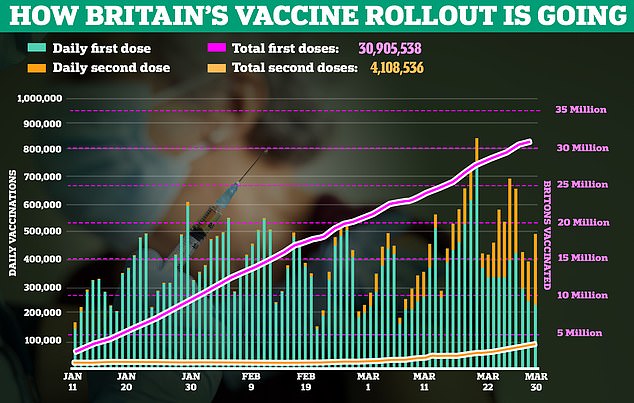 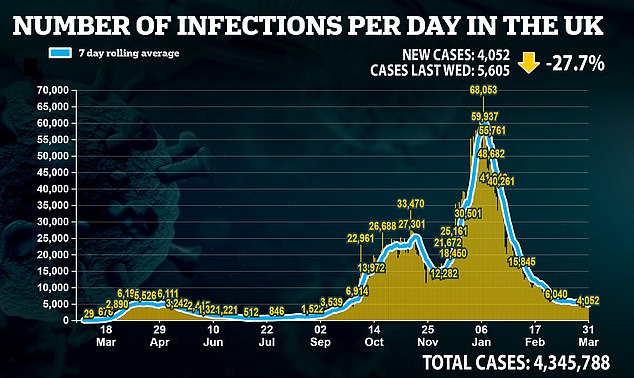 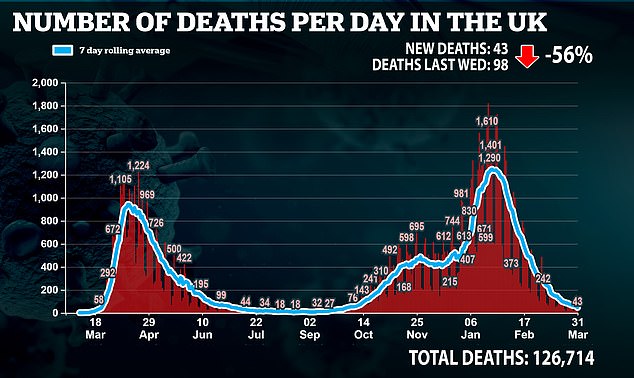 ‘So, if you have not been jabbed and are eligible, please do book in – staff are working hard to protect as many as possible, as supply allows.

‘I had my jab a few weeks ago – it is easy, quick and effective.’

The Moderna jab is, like the Pfizer vaccine, based on mRNA technology which involves injecting synthetic fragments of genetic code that instruct human cells to build the distinctive ‘spike’ protein found on coronavirus particles.

These new spike proteins cannot cause infection, but their presence enables the immune system to recognise Sars-Cov-2 coronavirus particles as dangerous invaders – and so attack any they come across.

Moderna is a fledgling American company and the vaccine is its first approved product. In the US, 64.3 million doses have been given.

Like the Pfizer jab, it must be kept at sub-zero temperatures during transportation and storage, but only at minus 20C rather than minus 70C for Pfizer.

The Government has ordered 17 million doses, and the EU has 310 million, with an option for another 150 million in 2022.

Those over 50 can book a vaccine via their GP or the central vaccine booking website. People who are clinically vulnerable or a health and care worker can contact their GP for an appointment.

It comes after the number of second doses of Covid vaccine outnumbered first doses for the first time yesterday.

A total of 270,526 second doses were registered on March 30, compared with 224,590 first doses, according to government figures. Previously the number of first jabs per day had always exceeded second jabs.

A total of 4.1million people in the UK are now fully vaccinated against Covid-19, around one in 13 adults.

It comes as Scotland’s Chief Medical Officer Dr Gregor Smith today said the UK could receive its first batch of Moderna Covid vaccines as early as next week.

Earlier this week, ministers suggested the UK would not receive any doses from the American pharmaceutical firm until the middle of the month at the earliest.

Culture Secretary Oliver Dowden told BBC’s Andrew Marr show he was confident the first shipment would arrive by the end of the month.

He said: ‘We expect that in April Moderna will come.’

But a leaked Scottish Government document from January laying out the dosing schedule showed Moderna jabs — the third vaccine to be approved in the UK — were expected as early as April 4.

Moderna, which was codenamed ‘Renown’ by the Government during its development process, is being manufactured by the Swiss-based Lonza biotech company.

Professor Adam Finn, an adviser on the Joint Committee on Vaccination and Immunisation, said the limited Moderna stocks will not be a ‘game changer’ because the ‘small outfit’ is focusing supplies on the US.

But he said: ‘It adds an extra string to our bow, if you like, and it gives us an extra line of security.’