The problem the 2022 Buffalo Bills have faced all season is that a good season will be viewed as a failure.

In a rational world, a 13-3 season with an AFC East championship and at least one playoff win is a reason to celebrate. Only one team can win a Super Bowl.

But this was the team that could finally get Buffalo that Super Bowl. The Bills were preseason Super Bowl favorites, and kept that position or close to it all season.

The Bills are capable of following through on that preseason hype, but they haven't hit that top gear in a while. If it wasn't for their "Super Bowl or bust" expectations, that might not seem so bad.

They struggled to put away the Miami Dolphins and their rookie third-string quarterback Skylar Thompson in a 34-31 wild-card weekend win. Before that, we all loved the moments Nyheim Hines gave us on two kickoff return touchdowns in Week 18, but the Bills also needed those two special-teams touchdowns to beat a mediocre New England Patriots team at home. Buffalo won 35-23, rallying after falling behind in the third quarter.

If you look at the Bills' results, it has been a while since they demolished a team. A 35-13 win over the Chicago Bears probably counts, but the Bears had the worst record in football and still led Buffalo at halftime. The Bills have had only one other win by more than eight points since the start of November. Their offense isn't deep beyond Stefon Diggs and Josh Allen, and Allen is turning it over too often. There have been times the defense looks like it misses Von Miller, who is out for the season with a torn ACL.

None of that is fair. The Bills are winning games and still look like one of the best teams in the NFL. Everything else is nitpicking. But finishing No. 2 this season wouldn't feel like a satisfying ending for the Bills. Buffalo fans have experienced that four times before.

The Bills look good but not like an overwhelming favorite. They have a shot at the Super Bowl, but so do a handful of other teams as we head to the divisional round. They look vulnerable. They could end up with a special season, but they don't look like a special team at the moment. 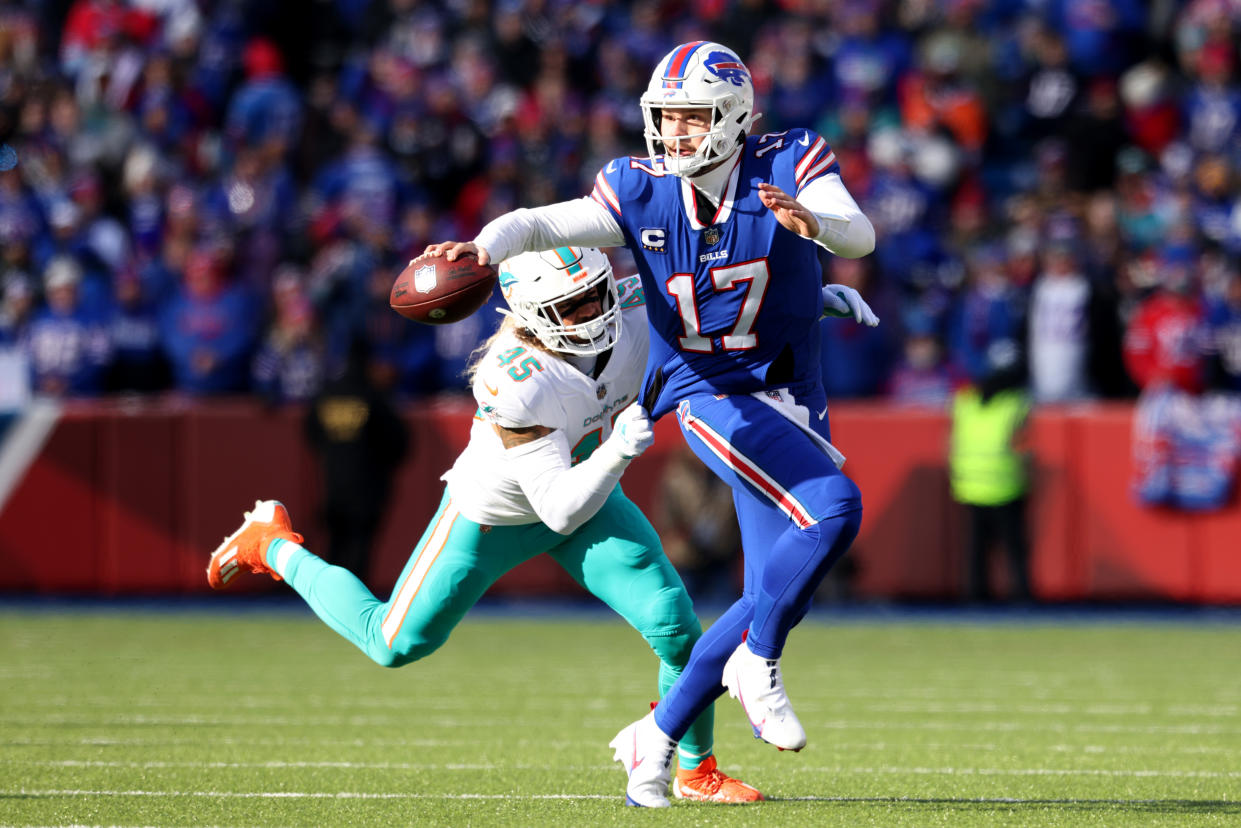 Here are the power rankings for the eight teams still alive in the playoffs, focusing on where they stand right now and the likelihood of them winning the Super Bowl:

The Giants deserve respect for a good season and the future is looking good too since it seems pretty clear the team made a fantastic hire with Brian Daboll. Daniel Jones has become a viable quarterback option going forward, assuming the Giants can re-sign him, and getting a playoff win is great. Sunday's Giants win was their first postseason win since Eli Manning beat Tom Brady in a Super Bowl for the second time. Now, all that said, there's no reason to rank the Giants higher than this. An upset of the Eagles would be an absolute stunner.

The Jaguars had a comeback for the ages, and we'll remember it forever. We also should acknowledge they were down 27-0 at home in a wild-card game. This is a good Jaguars team that has won six in a row, and they might have more upset potential than anyone is giving them credit for if Trevor Lawrence plays his best game (and avoids four first-half interceptions). But it feels like the Jaguars are a year away. The defense probably isn't going to have a fun day against the Chiefs.

The Cowboys are at No. 6 but make no mistake: They have all the ingredients to win a Super Bowl. I can't talk myself into the Giants or Jaguars winning it all, but everyone else can. That includes Dallas, who looked great against the Buccaneers. It has been overlooked that this team won 12 games in the regular season and has as much balance as any team left.

The Bengals went through their first 15 games without a starting offensive lineman missing a game due to injury. Then three of Cincinnati's five linemen went down with injury, and all three could be out Sunday at Buffalo. It takes a lot of good fortune to make a run to the Super Bowl. The Bengals had more than their share last season. Perhaps they could overcome those injuries and make it back to a Super Bowl. They were playing at that level late in the season. But it's a bigger challenge now, especially with a road through the AFC that will start at Buffalo and probably leads through Kansas City after that.

Linebacker Matt Milano is having the season of his life. He was named first-team All Pro. In the wild-card round he was really good, with 10 tackles and two sacks. Milano was a good player his first five seasons, but never even made a Pro Bowl. He's having a huge breakout at age 28.

It's fair to give the Chiefs a little bit of the shade that the Bills get. It's hard to throw too much shade on a team that has won 10 of 11, but the late-season schedule was very soft and the Chiefs rarely blew anyone out. Five of those wins came in one-score games. They struggled to beat teams like the Houston Texans and the Tennessee Titans with Malik Willis at quarterback. We all know that the Chiefs defense is still just average. But it's still a 14-3 team with the best quarterback in the world, and got some valuable rest on wild-card weekend.

The Eagles are hard to rank. How healthy is Jalen Hurts? Presumably, after he played in Week 18 and then got a week off, he should be close to 100 percent from a shoulder injury that caused him to miss a couple of games. If he's back to normal and not rusty, the Eagles are as good as anyone. They're 14-1 with Hurts in the lineup and don't have to leave Philly until the Super Bowl, if they advance that far. But, like the Bills, the Eagles were much more dominant in the early and middle parts of the season.

The 49ers haven't lost since Oct. 23. If you ignore Christian McCaffrey's first game with the 49ers after he was traded to San Francisco, when he got limited snaps hours after joining the team, they've won all 11 games with McCaffrey. Eight of those wins were by double digits. No team looked better in the divisional round. There's already a weird debate about Brock Purdy going on, but the truth is that he has been an efficient quarterback playing his role very well, and if the 49ers lose it probably won't be because their quarterback had a meltdown many seem to be anticipating. It's still hard to win three games and take home a Super Bowl, but no team is playing better than the 49ers.